The Occult, Terrorizing Politics of QAnon

Q's followers were promised a war. Now, as federal agents snatch people off the streets, they believe it's arrived. 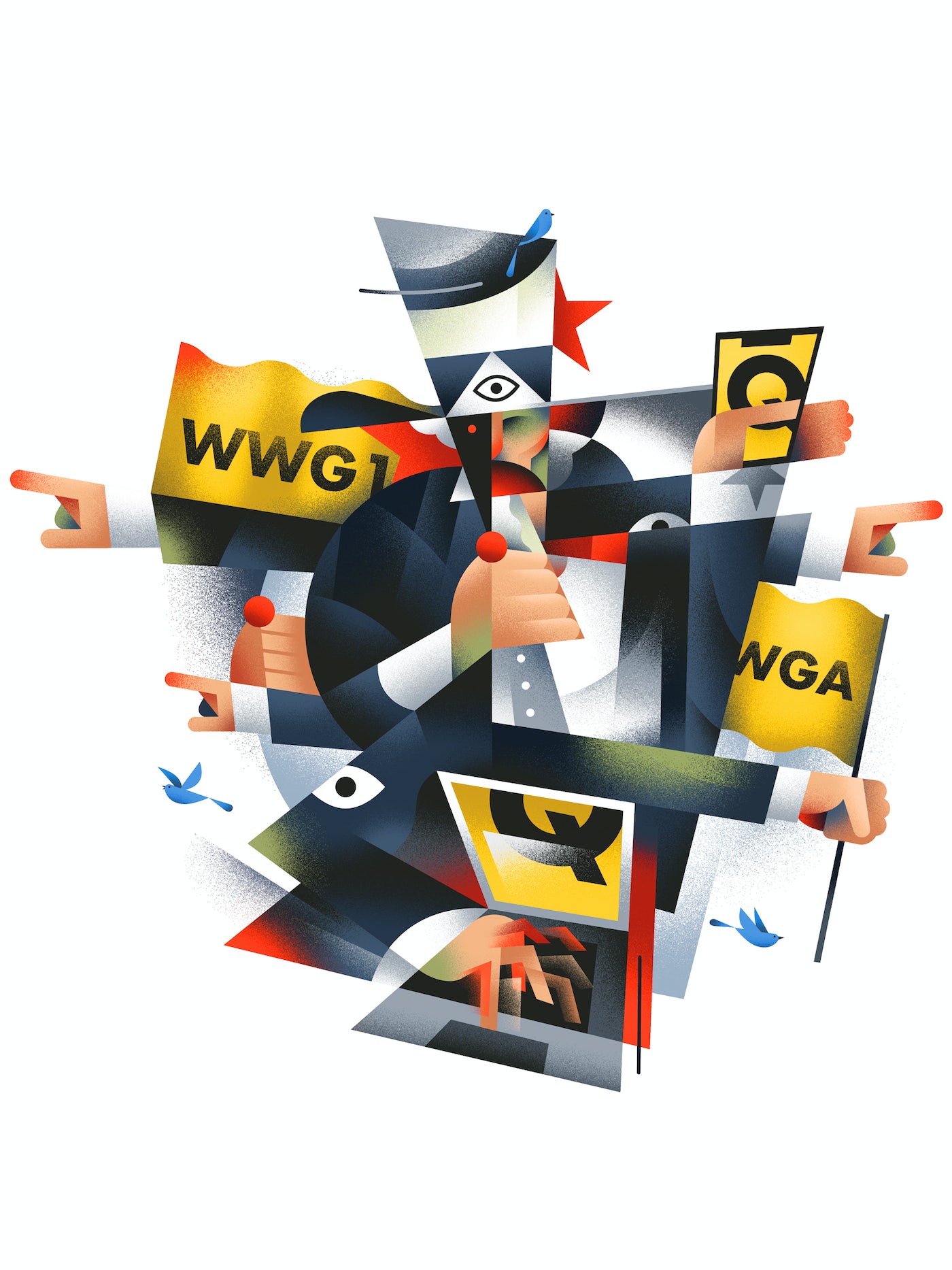 This July, as police in Portland, Oregon, met protesters with grenades, pepper-ball rounds, and tear gas, the acting head of the Department of Homeland Security issued a memo detailing the alleged crimes (mostly vandalism) of these “anarchists.” When unidentified federal officers showed up and began taking protesters away in unmarked vans, Oregon’s Democratic senator, Jeff Merkley, appeared on TV to reiterate what he had already said on Twitter: “Trump is using these federal forces as a personal, paramilitary force.” As I watched, something in my reality felt like it fissured. It shouldn’t have; for three years, people had been predicting just such a domestic cataclysm.

In November 2017, an anonymous message board user published a short post claiming that President Trump would soon order “a state of temporary military control.” Riots were being planned, the post warned. “Special ops” would follow, and “certain laws” would be lifted “to provide our great military the necessary authority to handle and conduct these operations.” A day later, someone who claimed to be the same person wrote, “Any military seen is for your protection as well as to demonstrate our resolve. Watch for confirmations tomorrow.” As Paris Martineau pointed out in New York magazine, the whole month of November 2017 came and went without any such military activity. But the quiet did not dull the fervor of the movement, now known as QAnon, that sprang up around that post and others laying out the sprawling, ever-shifting web of conspiracy theories and fantasies of impending authoritarian response.

QAnon then was still in its infancy, but hundreds of thousands of people were already convinced that “Q,” the person posting such “crumbs,” was a top government agent with access to high-level intelligence. This heroic insider, according to the emerging lore, had taken it upon himself to prepare the public for the “great awakening,” “the storm,” when the president would prevail over their common enemy: the Democratic Party and all the Marxists and Satanists (allegedly) who keep it in power. These “globalist” traitors, Q’s followers claimed, belonged to a powerful, secret, child sex trafficking cabal. This was, they knew, the “deep state” their president had referenced. Only with their courageous support could he root it out.

The conspiracy theory had emerged from imageboards like 4chan, but it grew on Reddit and Twitter, and flourished on YouTube and Facebook. Now, three years on and much closer to Trump’s reelection bid, QAnon has become a political movement. The watchdog group Media Matters has identified dozens of congressional candidates, mostly Republicans, who are sympathetic to Q; some have merely used one of QAnon’s preferred hashtags, but most actively promoted the movement, and some clearly harbor its perverse obsessions. According to a Washington Post analysis, these candidates won nearly 600,000 votes among them; 11 have advanced toward the November election. Trump himself has repeatedly nodded to Q; on the Fourth of July alone, he amplified Q-related Twitter accounts 14 times. By then, the dubious legal wheels were in motion for Trump to send militarized federal forces out to do his bidding around the country—just as Q had “predicted” he would three years earlier.

The media tends to associate QAnon with a belief in a secretive “deep state,” a pedophile cabal, a child sex trafficking conspiracy aided and abetted by the likes of George Soros, Hillary Clinton, and the model Chrissy Teigen—but these conspiracy theories only reveal a fraction of the movement’s activity. On their online shows, Q followers concern themselves with many of the same issues as the mainstream media: Covid-19, Black Lives Matter, and Trump’s quest for power. Of course, they have a nakedly obvious point of view on current events. All of these topics can be slotted into their battle against the deep state, and are augurs of the chaos to come. Followers of QAnon slide freely from railing against protective masks to cheering on the president as he cracks down on Black activists. This rolling interpretation of everyday events represents their field of play—not just a trove of emails from the DNC server, or a series of arcane imageboard postings by someone (or someones) going by the moniker Q.

Journalist Jeff Sharlet has likened the beliefs of the QAnon faithful to gnosticism: Followers believe that through Q they can divine the secret patterns behind all things. For years now, some of its most active participants online have been spreading the word with zeal and, on a few occasions in the off-line world, with violence, gaining the notice of the FBI. They have been promised a war. They tell themselves the president is on their side.

This July, on one scorching day better spent indoors, just over 1,000 people were tuned in to a QAnon livestream as two women read Q’s intel “drops,” alternately weighing in on their relevance. It’s part of a 24/7 YouTube channel on which a Trump campaign communications staffer appeared last October, making an appeal to the channel’s more than 79,000 subscribers, or, as the host called them, “soldiers on the ground.” As I watched, while a chat box scrolled endlessly and a DIY news chyron announced, “DONALD TRUMP VOWS DEPLOYMENT OF MORE FEDERAL FORCES IN MAJOR CITIES,” the hosts sifted through the messages behind Q’s messages. “These next two weeks coming, they’re going to be like two weeks you’ve never seen,” one said. It took Trump only two days to announce Operation Legend, his “surge” of federal law enforcement officers into American cities.

Oregon, where it all exploded, is perhaps the clearest window we have into the occult, terrorizing politics unleashed by QAnon: There, Republican Jo Rae Perkins is challenging Jeff Merkley on November’s ballot. In January, she announced her Senate bid in a tweet adorned with QAnon hashtags. As Willamette Week noted, “The strong implication was that Perkins believed her candidacy was part of a greater, secret struggle.” The hot, weird summer of 2020 has handed her one.

Perkins was nominated in May, with 49 percent of the Republican vote. That night, her campaign posted a video of her saying she stood with Q and the president, along with the “anons” and “patriots.” “Together,” Perkins said, “we can save our republic.”

Still, the Oregon state Republican Party stood by her: It has so far made no official comment on Perkins’s candidacy, but the party’s vice chairwoman told The New York Times that Perkins had her support. Some other Republican candidates, along with Oregon Right to Life, have endorsed her.

They may have seen not liability but opportunity in her ties to QAnon. While Merkley was on national TV in July decrying the federal officers loading protesters into unmarked vans, Perkins was, as her Q comrades were, livestreaming her commentary on the Portland protests on social media, praising law enforcement and calling the senator a “traitor” and “sellout.” Trump has made Portland a stage, and Perkins is one of the few candidates who can attach herself to his show and gain votes in exchange.

In its present form, Q has enveloped parts of the Republican Party—the Perkins campaign had the support of a political consulting firm started by Ted Cruz’s former presidential campaign manager, according to Federal Election Commission filings. But the Q true believers have also captured the whole national vibe. Around a campfire on the Fourth of July, former U.S. national security adviser Michael Flynn pledged an oath to Q—“Where we go one, we go all”—and tweeted the video. When QAnon followers promoted a baseless child sex trafficking conspiracy theory involving the online furniture retailer Wayfair, former adult entertainer Jenna Jameson amplified it on Twitter, commenting, “There are no coincidences.”

Any sign QAnon can see can be bent to the movement’s core belief system: the federal agents snatching people from the streets, uprisings and riots, censorship from tech companies wielding unfettered power, a flood of indictments, notorious sex trafficking trials, suspicious deaths. Stolen elections. Crooks operating at the highest levels of government with apparent impunity. A police state. Fascism. QAnon’s paranoid fantasies align with the general and uncomfortable sense that there is no one in charge, just ossified power structures holding up retrograde leaders, with everyone else abandoned by systems of care that have been deliberately hollowed out.

Melissa Gira Grant is a staff writer at The New Republic and the author of Playing the Whore: The Work of Sex Work.