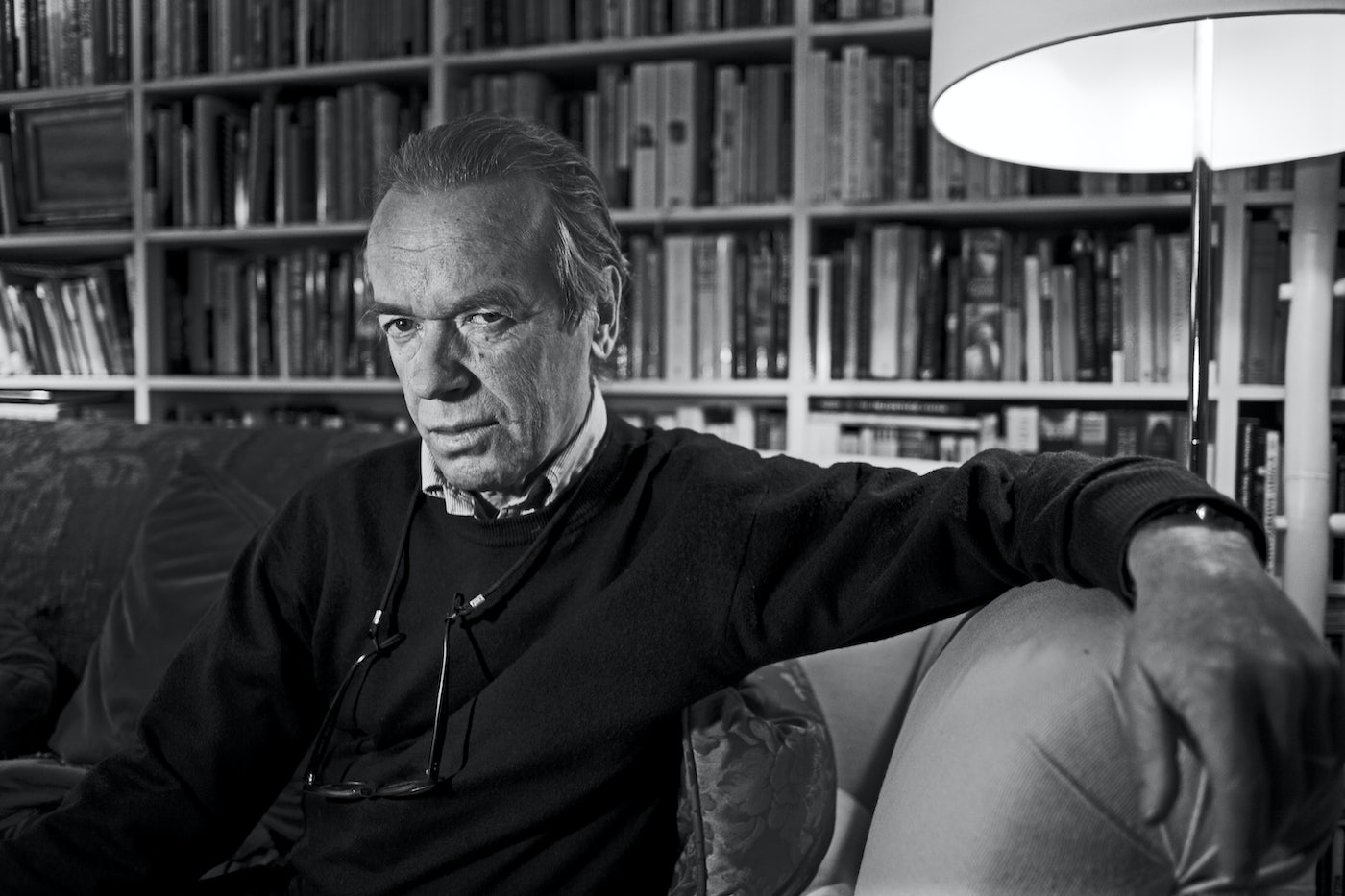 How do you solve a problem like Martin Amis? Like Maria from The Sound of Music, he’s a clown to his detractors and a musician to his fans—the music of the well-tuned sentence, that is, and the clownery of the literary egomaniac. I’ve already checked to see whether any other reviewers have made this comparison before, because if there’s one thing Martin Amis hates, it’s a cliché. He titled his 2001 essay collection The War Against Cliché (“all writing is a campaign against cliché. Not just clichés of the pen but clichés of the mind and clichés of the heart”), and in his new book, Inside Story: How to Write, he defines a cliché as anything repeated—“any phrase that bears the taint of the second-hand.”

The problem with this kind of didacticism, from Amis, is that he’s become a byword for literary cliché himself. If a cliché is a formal expression whose original charm has been deadened through repetition, then nothing could better describe Amis’s reputation as an overrated, overpaid philanderer. But let’s leave Amis as a public figure out of it, for now, even though he’s behaved like such a plonker for so long—forever posing with cigarettes and a soft expression like some nervous teenager; building a tabloid version of himself as a Don Juan among posh literary women; nurturing feuds with one celeb while leeching off the fame of another—that it’s difficult to approach his novels soberly.

The party-boy persona is so stale that these antics now elicit more pity than controversy. And if Amis is the “horrid little man” of his ex’s recollection—Julie Kavanaugh recalls him “chuckling away as he re-reads his own prose” while she cooked—does that matter to the books? Being horrid doesn’t mean your writing is de facto bad. Kingsley Amis’s bullying ways didn’t make a dent in the quality of Lucky Jim. In Martin’s case, however, it does seem to matter, because his writing has been led astray by his ego’s idea of what an author should be.

In his haste to escape the taint of the secondhand, Amis has reached for egregious figures of speech, but then repeated them, as if forgetting they’ve already been used. Twice he has made jokes about trial separations being “almost always a complete success.” He uses the word “deliquescent” frequently: “deliquescent macadam”; “The Deliquescent Virgin”; “Dodo, whose corpulence, in tendency, was not deliquescent but all stretched and taut.” After reading only a handful of his books, I found Amis twice describing a stew as “farting,” and one of those instances referred to a vulva half-glimpsed beyond a hot girl’s nightie—a “farting cassoulet of pussy,” to be precise, although in fairness he claims his brother said it. Women’s bodies are “like tits on a wand” to such an extent that Inside Story includes an anecdote about a young woman making fun of Amis about it: “What was it you once said? About the wand?”

Amis repeats himself, or rather self-quotes, with an abundance that leads to what I can only call intra-oeuvre clichédness. That might just be a stingy way to label what might also be termed “style,” but there’s no room for any of that in Amis’s own theory of cliché. This contradiction matters, not because it condemns Amis but because it expresses something at the heart of his practice: specifically, a poorly concealed self-consciousness about writing well, paired with an equivalent lack of self-awareness about where his own talents really lie.

Amis did well with fiction early in his career, and for a long time proclaimed that life-writing was the less interesting genre. His novels about the scuzzy bits of London life are nastily readable. London Fields (1989) is a neo-noir plot set amid vague nuclear anxiety, told with extremely fascinated condescension through the exploits of a hot, suicidal woman named Nicola Six and a working-class hustler called Keith Talent. Amis has a lot of Keiths in his fiction; they’re avatars for himself and his hatreds, cadavers for his sociologist’s scalpel to slice into, the “fool” his father called him in letters to friends.

Like his old friends Christopher Hitchens, who supported the invasion of Iraq to the very end, and Salman Rushdie, who told a Maxim model via Facebook message that she “looked so gorgeous and hottt” (a sobriquet instantly unforgettable once read), Martin Amis had a bad turn of the century. Critics looking to sum up his downward slide usually cite Tibor Fischer’s excoriation of Yellow Dog (2003) in The Telegraph, which lamented Amis’s “ache for gravitas.” The postmodern, hardboiled style of London Fields had given way to fiction in which Amis tried to get by on his reputation as a “style supremacist.” Worse still, in the place of lurid plot he packed these novels with ideas, his great weakness, which also mar his nonfiction writing, with Amis tending toward both overstatement and banality on topics including nuclear armament, the Holocaust, 9/11, the sexual revolution, and how to write a sentence.

Martin Amis’s talents, however, are genuine, and they include an ear for conversation and a facility for autobiography so natural that it has persisted almost in spite of his attempts to write otherwise. Inside Story is technically his fifteenth novel, though its subjects (Saul Bellow, Christopher Hitchens, Kingsley) are very real. Like his 2010 novel The Pregnant Widow, the new book is done in novel style, but the events come quite strictly from his own life.

The line between memoir and novel has been blurred for Amis from the start, since all his narrators write in the same faux-posh, cleverclogs register and often explore events, topics, and people that recur in his later autobiographies. The relationship that structures Inside Story, for example, is with a woman he calls Phoebe, who bears a strong resemblance to Lily in The Pregnant Widow, which itself is narrated by a regretful novelist in late middle age looking back on the 1970s. Best to call the whole lot of it autofiction, not least because otherwise the different names become confusing.

One day, Phoebe’s niece Maud shows up on Martin’s doorstep, to hand him a note explaining that Kingsley Amis once told her that Philip Larkin was Martin’s real father. Larkin appears as a kind of Darth Vader character in Amis’s literary criticism, the mythic figure of total artistic success who lived a life of total personal failure. Certain factors make it quite likely that Hilly Bardwell, Martin’s mother, did actually have this affair. Amis strings out the mystery, which is quite juicy and fun, and suddenly even the hackneyed phrases from the Amis canon seem like old friends, because the reader is in a recognizable world.

It’s like a soap opera. The black-and-white photos included in the book are fun to look at, in a magaziney way: There’s Anna Wintour bebobbed beside Christopher Hitchens’s hat, and Hitchens looking surprisingly attractive while getting arrested in the ’70s. But they also give away the ending: On page 456, there’s a studio portrait of young Kingsley with Bardwell, and the son is the spitting image of the father, rather edging out Larkin. It’s quite the vortex, with reality and fiction and misapprehension crashing into each other at every turn.

In his first straightforward memoir, Experience (2001), Amis explained how another accident of history left him shellacked by the upper-class English style of masculinity. In one of many charming scenes featuring his children, which give away the rather sensitive, observant guy hiding beneath that posho carapace, his two little sons confront him in the car over what class they are, and try to decode their dad’s accent:

—No. Of course not

—And you don’t say dee. What a lovely dee it is.

—Early the next dee, said Jacob.

—What dee would suit you?

—Then why do you say Mondee and Fridee and Sundee?

—Jesus. I trained myself to do it in my teens because I thought it sounded posh.

—Why d’you do that? asked Louis with sincere puzzlement.

—Because it used to be cool to be posh.

His head snapped round.

A few different reviewers have quoted this exchange, which is a tragedy in miniature. He just wanted to be posh! It explains why Amis and Christopher Hitchens thought that drinking a lot of alcohol, being weird about women, and smoking a lot of cigarettes were enough material to underwrite entire personae.

But all of that is caught in a few words exchanged between the back seat and the driver, its heaviness made light as air by the joke, transformed by a new version of Amis as a father. In between there are veils of memory and history, of relationships layered and shifting over time, and together it all forms an instinct for conversation—for the best and funniest spin on an idea, performed in the retelling.

It is conversation that shines in Amis’s prose. In Inside Story, he recounts a long-ago visit to his stepmother Jane’s house in London:

Jane had turned in her swivel chair and now slipped off her glasses.

These glasses had a history and I asked, “Are they the ones that make you look like a career-mad cockroach?”

“Put them back on a second. Christ. They really do.”

After spending all day listing the stupid adjectives and adverbs Amis has repeated over 47 years, this passage made me take off my own glasses in reluctant delight. It’s the phrasing of “career-mad” as much as the idea of a cockroach in glasses that does it. Actually, I don’t know quite what it is. Amis has a way of putting things into conversation, or remembering an immortal phrase from some ordinary afternoon, that is quite difficult to pin down. It’s something too complicated for Martin Amis to understand about his own craft, so maybe it’s just unnameable. But it’s very human, and it’s worth something.

Comic remembrance is Amis’s most successful mode, and Inside Story is best read as an addition to an established and expanding autofictional universe—the Martin Amis Story—rather than the late-career remembrances of a great novelist. It could be gender, his father, sexual insecurity, or something else, but whatever block has prevented Amis from realizing what he’s best at must be big, and belatedly breaking down. The novels aren’t great, and the man is beyond the pale, but I’d like to say a word on his behalf—Martin makes me laugh.