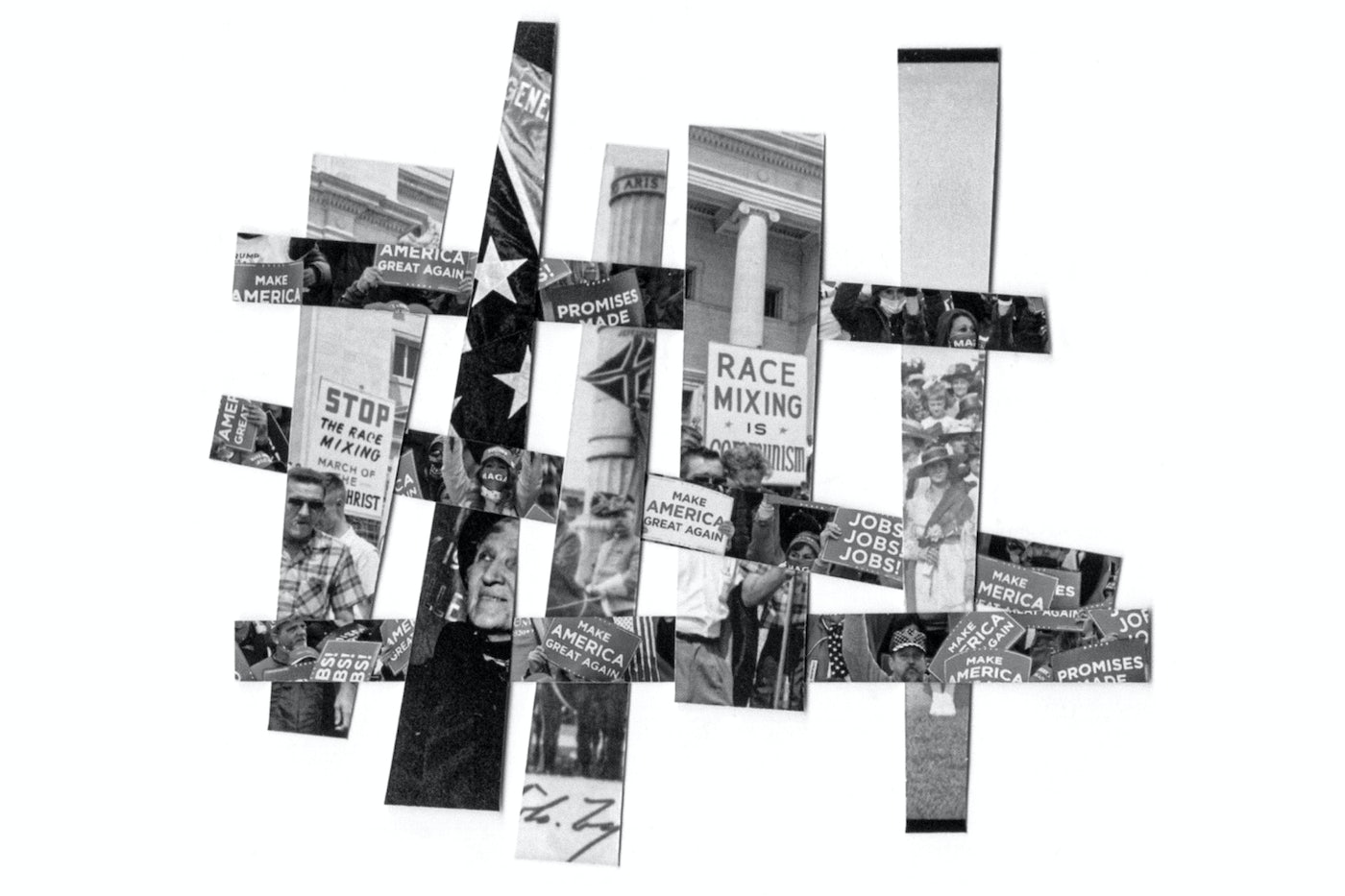 Even after Donald Trump is evicted from 1600 Pennsylvania Avenue, he will still lead a multimillion-person political movement determined to protect and defend a white nation-state. Deeply aggrieved, self-righteous, and well-armed, a substantial percentage of these belligerents harbor a far greater commitment to whiteness than to American democracy.

President-elect Joe Biden’s challenge is to face down this threat with something more than a heartfelt appeal to redeem the promise of a multiracial America. But a strictly rhetorical plea to lay aside our differences and spontaneously unite is not only impossible; it is dangerous, all the more so because these rote invocations of the better country remain intentionally blind to the catastrophic conditions that have broken our nation apart throughout its history. Biden’s unrequited national unity overtures to the Trumpist coalition of anti-unionists are indeed a sad echo of ghastly overtures from our nation’s past—a long-running dystopian fantasy that tens of millions are willing to fight over.

Nationalism is typically understood to be an identification with one’s nation to the exclusion of the interests of other nations. In America, though, that Other comes from within: It is the nonwhite and immigrant population that has long served to galvanize a lethal brand of white nationalism as a ruling ethos. It’s the people burning cities to the ground, committing mass voter fraud, and stealing admission to jobs and universities; it’s Black people, it’s Mexicans, it’s anyone whose identity wasn’t accepted when America was great—when America was Dixieland.

Projecting insecurity onto a racialized other in order to translate a governing crisis into an existential racial one is a political tactic embedded in this country’s very founding. We have been here before, in more ways than meet the eye. One of the precipitating factors that led to the Civil War was the election of a president perceived by the South as anathema. Southern whites viewed Lincoln’s election as a shot across the bow, an act of unbridled aggression. The mindset that put the elite of the South on their disastrous, treasonous trajectory was a fear that their way of life—grounded in the enslavement of nearly four million African Americans—was threatened by a sinister takeover of the federal government. Never mind that Lincoln, despite his opposition to the expansion of slavery, was kindly disposed to the racialized status quo.

Constant efforts to pacify the South by feeding its appetite for Black bodies—from the violent license of the Fugitive Slave Act to the dehumanizing logic of the Dred Scott ruling—failed to quell the white South’s perpetual sense of endangerment. It thus became politically expedient for Southern whites to cast Republicans in power as the aggressors—a pivotal move that permitted the South’s treasonous violence to forever be framed as principled self-defense.

The ensuing ideological distortions have formed the central plank in the Southern mythology of the Lost Cause—a brand of nationalist scapegoating that produced the century-long reign of Jim Crow, with thousands of monuments erected throughout the South in tribute to the Confederacy’s allegedly sacrificial honor. The Lost Cause narrative not only neutralizes the war itself, but also nullifies the ultimate sacrifice of Black Americans, called upon to join the Union to defeat the Confederacy. Black soldiers, congressmen, senators, state and local officials, bureaucrats, and functionaries were celebrated and rewarded by the Republicans for their patriotism only to be given over to the murderous mobs of white Southerners once the Republican Party relinquished its institutional interest in Black political power.

The violent overthrow of Reconstruction and the suppression of Black people into quasi-enslavement throughout the South resulted from the deadlocked presidential election of 1876. The price of the South’s permanent and unconditional readmission into the Union as a bloc of racially apartheid states was the abandonment of these once-valuable Black citizens to ruthless terrorization.

This embrace of white brotherhood was dubbed “Redemption” in a suitably vicious mangling of commonsense language. Organs of elite opinion rejoiced that the warring Democrats and Republicans had once again extended an olive branch to preserve the Union, but the all-too-plain truth of the matter was that the olive tree in question was rooted in the same soil that buried countless Black bodies.

That we have been here before might suggest that attending to the cautionary tales from our past could secure a new route around unpassable conditions. Yet the Democrats’ unrequited longing for reunion with the Trumpists presents a terrifying scene of imminent betrayal, one that you can’t help but hear replayed again and again against the anguished backdrop of Al Green’s achingly earnest “Let’s Stay Together.”

The commonly expressed desire for such an unearned reunion with the forces of white reaction remains baffling to battle-weary students of race history. The discourse of the postelection punditry betrays emotions ranging from befuddlement to panic about what more “we” must do to reach “them”—as though the most urgent injury that we must attend to is the presumed hurt that underwrites the fact that they want nothing to do with “us.”

This effort to let white supremacist bygones be bygones not only rehearses impulses that erased the cataclysmic causes of the war; it also echoes the reunionist stance that the war was a difference of opinion that got out of hand.

White supremacy was the bond that survived the war, that healed the breach, that soothed the hard feelings. It was at the same time the elixir that allayed any sense of responsibility to the millions who were left to suffer through the pogroms, lynchings, and abject domination in every conceivable pocket of Southern society. And as was the case a century and a half ago, the current bid for reconciliation reflects a frightening failure to confront exactly what the thirst is that Trumpism whets—or whose blood has to be sacrificed to satisfy it.

The return of this crushing dynamic could have been forestalled had the spoils of the last reunion not been so brilliantly encoded and naturalized into every sphere of American memory. Efforts to decode and contest the omnipresence of white supremacist ideology have supplied invaluable resources for the clear refutation of the Lost Cause since the myth’s brutal inception. Generations of thinkers, activists, and practitioners have honed observations, histories, and data into understandings of how our institutions function in ways that extend the mistakes of the past well into our future.

It’s thus no accident that Donald Trump, the twenty-first–century president of white grievance, has opened fire on these ideas. Last fall, he issued an executive order prohibiting their dissemination through the ranks of the federal bureaucracy and, by extension, into American society at large. In a stunning reversion to Lost Cause-ism throughout all levels of the federal government, ideas such as structural racism, intersectionality, implicit bias, and critical race theory were stigmatized, alongside initiatives like The New York Times’ 1619 Project, as un-American. And the far-from-subtle implication of this act of censorship—true cancel culture in action—was that these ideas and inquiries all violated the American social compact, because they make the white people Trump enlists into the base of the white-power GOP feel distressed.

And what was yet more surprising—even shocking—is how quickly purportedly liberal institutions stepped up to comply. Stanford University, for example, announced and then quickly walked back a set of plans to over-comply with the order by prohibiting language like “systemic racism exists at Stanford.”

There’s a curious historical synchrony to this crowning Trumpist assault on the intellectual effort to expose and discredit Lost Cause thinking. At the dawn of the Civil War, the vice president of the Confederacy, Alexander H. Stephens, said of his burgeoning nation-state: “Our new government[’s] ... foundations are laid, its cornerstone rests, upon the great truth that the negro is not equal to the white man; that slavery subordination to the superior race is his natural and normal condition.” And at the Civil War’s dusk, Jefferson Davis—then the president of the Confederacy—opined: “If the Confederacy fails, there should be written on its tombstone: Died of a Theory.”

Today’s neo-Confederate uprising on the right seeks to resurrect itself on that same theory. Indeed, Trump’s soldiers—the millions who refuse to wear masks, who willingly accept less health care, increased toxicity in the environment, the lethal risk of more guns than people, and the looting of treasury by Trumpian plutocrats in MAGA hats—are, like their Confederate forefathers, willing to die for a theory. And unless and until Democrats are willing to forcefully repudiate this theory, instead of seeking to rhetorically appease its adherents, we are likely condemned to play out the all-too-familiar endgame of the Lost Cause yet again.

Whiteness’s hope now lies in nursing its resentments and extending its boundaries. Will Democrats finally realize that they cannot afford to fight this dynamic with a color-blind strategy? If the definition of madness is indeed doing the same thing and expecting a different result, then we can only hope that sanity prevails.

Kimberlé Williams Crenshaw is the founder and executive director of the African American Policy Forum.