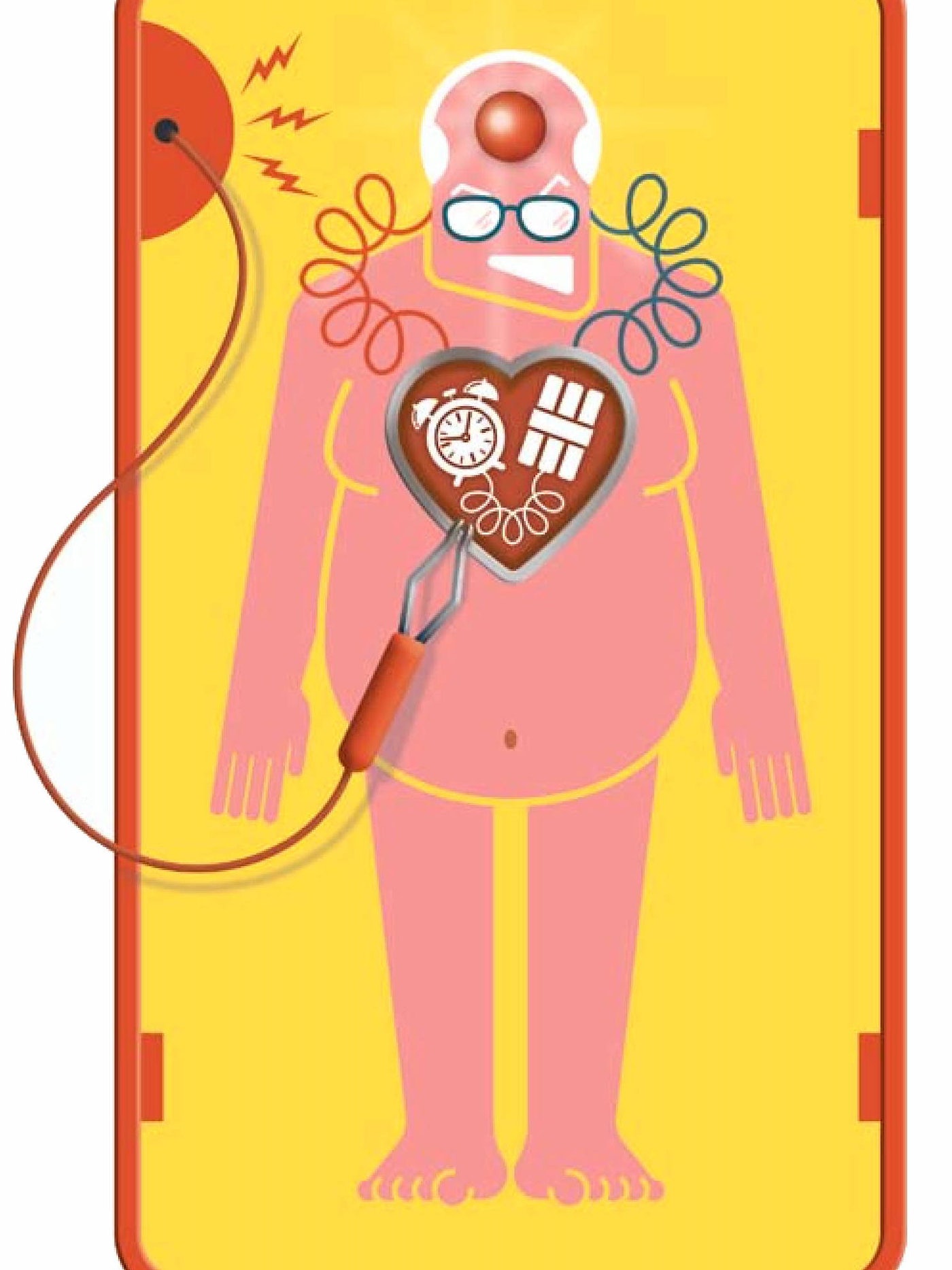 What is wrong with Dick Cheney? Since the earliest days of his vice presidency, people have been asking this question. At first, it was mostly out of partisan pique; but, increasingly, it’s in troubled tones, as one of the most powerful men on the planet grows evermore rigid, belligerent, and just plain odd in both his public utterances (“Go fuck yourself,” Senator Leahy) and private actions(shoot a man in the face and not bother to call your boss ‘til the next day: What’s up with that?). In October 2005, longtime Bush-Cheney pal Brent Scowcroft fanned the Dick-has-changed flames when he told The New Yorker, “I consider Cheney a good friend--I’ve known him for thirty years. But Dick Cheney I don’t know anymore.”By the following February, a Newsweek profile noted that speculation as to the causes of the vice president’s “darkening persona” had become a favorite Beltway parlor game. (“Has he been transformed, warped, perhaps corrupted--by stress, wealth, aging,illness, the real terrors of the world or possibly some inner goblins?”) Fast-forward a year, and Cheney can hardly open his mouth without setting off a fresh wave of buzz about whether he has finally gone ‘round the bend. As Washington Post columnist Jim Hoagland recently asked, “Is the vice president losing his influence, or perhaps his mind?”

Much of the Cheney speculation focuses on September 11 and the nation’s subsequent immersion in a shadowy new breed of war.Another popular theory holds that Cheney’s time in the private sector--and the enormous wealth, power, and privacy to which he grew accustomed--spoiled him for a return to public service. Yet another posits that Cheney, recognizing this president’s need for a strong father figure, has gotten carried away with his role as White House pater familias. But, alongside such talk of external stressors, the possibility is often floated that Cheney’s transformation has a more physiological root--specifically, that the vice president’s chronic heart problems are to blame. While this theory tends to be quickly dismissed as lacking concrete proof, it nonetheless resurfaces again and again, as if people are unable to dismiss the notion entirely.

Part of the problem may be that the science surrounding this issue remains, in many ways, as much of a puzzle as the vice president himself. Currently, there exists an impressive (and growing) pile of research indicating numerous ways in which a person’s cardiovascular troubles--as well as the treatment he receives for them--may erode his mental acuity, especially as a body ages. But there is, as yet, little consensus about the exact hows, whys, and what-to-do- about-its involved. Even so, considering all that we know about the sorry state of Cheney’s circulatory system--spotlighted most recently by the March 5 news that the v.p.is suffering from deep vein thrombosis, a potentially fatal blood clot in his left leg that will require months of treatment with blood thinners--it seems only prudent to bring the cocktail chatter into the open and examine some of the research linking heart health and cognitive function. Is there, in fact, any medical basis for the persistent speculation that--war, terrorism, and partisan politics notwithstanding--the trouble with Dick Cheney is, quite literally, a broken heart?

First, let us review what is publicly known (and reasonably suspected) about the vice president’s defective ticker. Since 1978,Cheney has suffered four heart attacks (the first at the tender age of 37) and recurring abnormalities (such as an episode of angina in2001), necessitating quadruple-bypass surgery (in June 1988), the placement of a coronary stent (November 2000), a repeat catheterization (March 2001), and the implantation of a cardioverter defibrillator, or high-tech pacemaker (June 2001).Around the time he acquired his defibrillator, Cheney’s ejection fraction--a measure of how efficiently the heart is pumping blood--was reported to be around 40 percent, two-thirds the normal level. There is also evidence that the v.p. is suffering from peripheral artery disease (which would hardly be shocking, since atherosclerosis is rarely confined to one area). Notably, in September 2005, Cheney underwent a procedure on the backs of both knees to repair popliteal artery aneurysms, the most common type of peripheral artery aneurysm and a pretty good indicator that his vascular troubles are progressing. Reports of Cheney’s feet swelling(a symptom of full-blown congestive heart failure) and his brief trip to the hospital in 2006 due to fluid in his lungs (also a sign of heart failure, though Cheney’s office said his troubles stemmed from medication he was taking for a foot ailment) prompted a flurry of speculation that the vice president is in much graver shape than publicly acknowledged. Finally, there’s Cheney’s newly diagnosed deep vein thrombosis. Any number of health problems can contribute to the development of such clots, including a history of heart attacks, heart failure, or artery disease. A person’s risk also rises as the result of extended periods of immobility, such as along flight--something for Cheney to consider before attempting another world tour like the one he finished February 28, which entailed 65 hours of air travel in nine days.

What exactly does the science say about the impact of an individual’s bad heart on his brain? Plenty. On some level, the relationship is commonsensical: Whenever a person’s blood flow is compromised, the brain is likely to be affected. “Wear and tear on your arteries is converted to wear and tear on your brain,” says Merrill Elias, an epidemiologist and psychologist with Boston University and the University of Maine specializing in the heart-brain connection. “People develop infarcts--areas of the brain that are dead because they’ve been deprived of blood supply.They have little strokes they’re not even aware of.” More dramatically, there is also the looming specter of vascular  dementia. The second most common form of dementia after Alzheimer’s disease, vascular dementia is brought on by a disruption in the brain’s blood supply due to stroke or damage to tiny blood vessels within the brain. Symptoms range from difficulty concentrating or communicating, to periods of confusion or depression, to memory loss. Unlike the relatively steady progression of Alzheimer’s,vascular dementia follows a more uneven course, with symptoms plateauing, or even abating, for periods of time. “Very often, the symptoms of vascular dementia’s cognitive impairment are brought on by stress,” notes Elias, adding that such troubles are often”accompanied by anger and mood changes.”

Beyond such straightforward connections between the circulatory system and the brain, however, researchers are furiously probing some of the more subtle, less understood linkages. Take Elias’s investigation of the link between cardiovascular disease and homocysteine, a by-product of metabolism that, in high concentrations, appears to act as a neurotoxin. As Elias explains it, high blood levels of homocysteine correlate with both cardiovascular disease and cognitive troubles; the causal relationship, however, remains a matter of debate. Other areas of inquiry focus on additional cardiovascular risk factors, such as high cholesterol, hypertension, and obesity.

If Cheney is indeed suffering from congestive heart failure,peripheral artery disease, or both, his staff might also want to check out the latest research on the neurological risks of those particular conditions. Numerous studies both in the United States and abroad (including Italy, Australia, and the Netherlands)indicate a link between congestive heart failure and cognitive decline, with at least one Australian study linking the decline specifically to a reduced ejection fraction. A 2003 study by researchers at the University of Maryland, meanwhile, showed that patients suffering from peripheral artery disease performed significantly worse than others on seven tests measuring a range of cognitive abilities, including concentration, manual dexterity, and executive function (the ability to control one’s behavior by managing other brain functions like complex problem-solving and emotional response).

Also of interest to the vice president’s people may be the ticklish question of whether heart surgery itself, most notably coronary artery bypass grafting (typically referred to as cabg, or”cabbage,” surgery), has a long-term impact on cognitive function.Of late, there has been significant interest in reports that bypass patients may be at an increased risk for developing Alzheimer’s and other dementias as they age. But there are less extreme post-op cognitive changes under investigation as well. From bypass patients and their families, you frequently hear stories of people who just didn’t feel or behave quite the same after surgery. Such personality changes are extremely common in the short term and may persist indefinitely for some, as the Cleveland Clinic notes in its literature on the subject: “Long-term deficits in mental functioning--such as an inability to process complex problems,follow directions or plan actions-- also may occur, although they are often subtle. The person may express these deficits by being short-tempered or easily frustrated. He or she also may be depressed or have mood swings.”

The diagnosis in such cases is typically “pump head,” or post-perfusion syndrome, a cognitive disorder that surfaces in the immediate wake of cabg surgery, possibly as a by-product of stopping a patient’s heart and running his blood through a bypass pump (a process that can, among other insults, release tiny air bubbles, fat, blood clots, and other debris into the bloodstream).Initially, pump head was thought to be temporary, with patients returning to normal within a year of surgery. In recent years,however, there has been evidence to suggest it is the improvements that are only temporary. In particular, in a 2001 article in the New England Journal of Medicine, researchers from Duke University found a cognitive decline--defined as a 20 percent drop in tests cores from a patient’s presurgery performance--in 42 percent of  bypass patients five years after surgery.

None of which is to say that Dick Cheney is, in fact, completely mental. As Dr. Mark Newman, lead researcher on the Duke study,notes, the declines in question tend to be subtle, especially in the early going. Moreover, as both Newman and Elias emphasize,people with high levels of education and those who remain mentally active as they age--say, by pulling the strings of the president of the United States--enjoy additional protection from mental slippage thanks to the brain’s development of cognitive reserves. Both professors, in fact, caution against attempting any pop diagnosis of this sort on the vice president.

Still, the cognitive erosion associated with cardiovascular problems(like cognitive erosion in general) only worsens with age. And, at66, the vice president is a bona-fide senior citizen with a three-decade history of serious heart disease. So, the next time you see Cheney behaving oddly, don’t automatically assume that he’s a bad man. Recall, if you will, a nasty barb hurled at him back in2005 by Democratic Congressman Charlie Rangel: “I would like to believe he’s sick rather than just mean and evil.” Partisan snark aside, Rangel may have inadvertently hit upon the heart of the problem.

Michelle Cottle is a senior editor of The New Republic.