You are using an outdated browser.
Please upgrade your browser
and improve your visit to our site.
Skip Navigation
Last chance for liberalism? 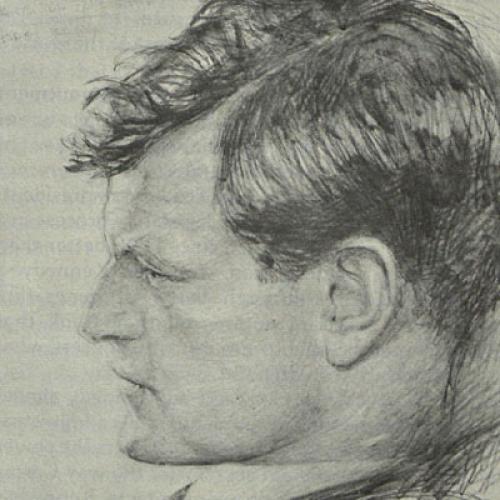 Edward Kennedy favors national health insurance, everybody knows. He also favors detente with Soviet Union, a break-up of the big oil companies, immediate normalization of relations with Communist-China, the Equal Rights Amendment and Medicaid-financed abortions. He doesn't think Russian mucking about in Africa should affect our willingness to negotiate arms limitation treaties. He co-sponsored the Humphrey-Hawkins full employment bill. He publicly criticizes human rights violations in Chile, Argentina, South Africa and Nicaragua, but prefers the "quiet approach" to the Soviet Union. He opposes tuition tax credits for private schools. He's spoken against the M-X missile, the neutron bomb, the cruise missile and nuclear aircraft carriers. He favored getting out of Vietnam and voted to keep the US out of Angola.

Ideologically speaking, what does all this make Teddy Kennedy? If you like him for president, or just like him, it makes him a liberal, a "conventional liberal," a "New Deal liberal," a "Great Society liberal," an "updated 1960s liberal." Senator Kennedy will not flinch if you call him "a big liberal." A Democratic Party activist calls him "maybe the last chance for the salvation of liberalism as we knew it."

But, if you don't like Kennedy for president, if you preferred Henry Jackson to Jimmy Carter in 1976 and lean to Daniel Patrick Moynihan in 1980, you are probably not willing to yield the "liberal" label to Kennedy, unless you call him a "new politics liberal." For example, Ben J. Wattenberg, a former White House aide to Lyndon Johnson and campaign adviser to Jackson, thinks that Jackson and Moynihan, not Kennedy, are heirs to the Great Society-New Deal tradition. He thinks Ted Kennedy is not even a proper heir to the hard-line foreign policy tradition of President John F. Kennedy. Wattenberg and some of his allies in the Democratic Party see a chasm opening up in the Democratic Party, and they see Kennedy on one side and themselves on the other. According to them, those on the other side are heirs to the 1972 Democratic convention, to "new politics" and to the policies and attitudes of Senator George McGovern.

According to Kennedy's critics on the right, the Massachusetts senator's sky-high poll ratings will plummet when the public finds out where he stands on issues. They think, they fervently hope, that he will not be such a far-away front runner for the Democratic nomination, should President Carter falter. They think, given the apparent rightward thrust of the American political pendulum, that if Kennedy did win the nomination in 1980, he could be beaten by any "reasonable" Republican. And they think that if Kennedy actually were elected, his policies and appointments would be closely similar to those of President Carter, and would receive the same public reaction of non-support verging on contempt.

I don't believe it, and neither, deep-down, do they. Wattenberg and other hard-line intellectuals may not like Kennedy's positions on issues, but they do not talk about him with anything like the same disrespect they show toward Carter and Senator McGovern. "An enormously skilled politician," Wattenberg calls Kennedy, "a bright guy who works hard. Perhaps the most skilled politician and senator we have, now that Hubert Humphrey is dead." An associate of Wattenberg says, "In foreign policy, Kennedy is a straight McGovernite, but he's not an ideologue. He's not in the grip of a movement mentality. Carter has appointed most of the same people that McGovern would have, and Kennedy would have them in his administration, too. Kennedy would go full steam in the direction that Carter has drifted."

What this critic means is that Kennedy knows where he wants to go and how he means to get there, even though he thinks the direction is wrong. This is a far cry from the impression that McGovern created in the 1972 election or that President Carter conveys now. Even Kennedy's political foes are forced to admit that a Kennedy presidency, if there were one, would be authoritative and directed from the top. Once there was a time when Kennedy, sitting at Senate hearings, resembled a ventriloquist's dummy who was able only to repeat what he was told by an aide sitting behind him. Those days are long gone. If you talk to Kennedy now, he obviously knows what he is talking about. He knows the percents of GNP that the Soviet Union and the United States are spending on weapons. He's got in his head the rough proportions of America's balance of payments deficit attributable to Japanese imports, oil purchases and US overseas military operations.

More than that, he gives the impression of having thought, and clearly, about how the world is put together. He thinks that the first foreign policy priority of a US president should be to prevent World War III, and he thinks that Soviet leaders, having experienced the ravages of World War II, share that aim. On his recent Moscow trip, he said, Soviet dissident leader Andrei Sakharov concurred that the US and the Soviet Union should not allow human rights considerations to undermine SALT negotiations. Kennedy thinks it is more effective to help Soviet dissidents by bargaining with the Kremlin than by bellowing, and proved it by bringing back a promise that 18 families will soon be released. He thinks that US-Soviet competition is inevitable, but he is not losing his head, for example, over Soviet and Cuban inroads in Africa. "I don't think the record shows that the Soviets have been notably successful there," he said. "I fundamentally believe that in 30 or 40 years, no matter what the great powers do, the Africans are going to live in African countries with African societies and will solve their problems with African solutions. They are not going to trade one colonialism for another."

Such ideas are deemed "soft" policy by Kennedy's critics, but somehow Kennedy does not convey an impression of being a "soft" person who would not defend American interests if they were threatened. He also does not seem to believe, as some New Left-New Politics activists surely did, that there is something inherently evil--racist, imperialist, exploitative--about the United States that renders it unfit to pursue its aims in the world. There is nothing isolationist about Kennedy.

To the contrary, Kennedy's moral sense applies as much to the downtrodden of the world as to those in the United States. Since early in his Senate career, he has been chairman of the subcommittee on refugees, an obscure panel without notable political payoff in conventional terms, and he has been an active, eloquent and widely-traveled chairman. In one of the most riveting speeches I have ever read, Kennedy last year told a World Health Organization meeting in Geneva, Switzerland: "I have walked through the refugee camps in Bangladesh and the Middle East. I have seen lifetimes of hunger packed into lives of children too young to understand their condition. I have seen their small figures, warped and deformed from malnutrition. I have seen their parents aged before their time, hollowed eyes peering out of bodies wracked with disease." Television doesn't report and the industrialized world doesn't care that millions die of filariasis and malaria, he said. "The crisis is a silent one." He has proposed a series of measures to direct US health policy to pay attention to the rest of the world's diseases, as well as our own.

Kennedy has a sense of outrage and commitment that his brothers also conveyed. But according to one of the country's best congressmen, Abner Mikva of Illinois, "Whatever his brothers were, they were not great legislators, and Teddy is. If Teddy were president, he would have command of the legislative process in a way that no president has had since FDR, better than LBJ's." Other senators, too, consider Kennedy a formidable legislator--though better at generating ideas than at soliciting votes--and they think that Kennedy would be able to get out of Congress what McGovern clearly couldn't and Carter can't.

In a way that Carter also can't be, Kennedy almost certainly would be fully in command of his administration. He never would give his cabinet officers the power to pick their own assistant secretaries the way Carter was forced to do for lack of wide contacts. Kennedy's Senate work has involved him deeply in health, labor, anti-trust, transportation, foreign policy, welfare and so on. He can pick up a telephone and call on any expert in the country for advice. "He has a long bench" of advisers, one admirer said. "He's not dependent upon any of us for his information."

In the Carter administration, except for Carter's tight circle of Georgians, almost no one, even in the White House, seems to owe primary loyalty to the president. Department aides tend to be loyal to their pet policies, the congressional committee that oversees them, the special interest that badgers them, their bosses, their careers--almost anything comes before loyalty to the president. That would not be the case with Kennedy. He would not be limited to a Georgia Mafia or even an Irish Mafia. It would be a very big Mafia, indeed. To the good, it would do his bidding; to the bad, it would not talk if what he did was wrong.

A Kennedy presidency would be activist. It would expand government's involvement in people's lives (though Kennedy favors deregulation and increased competition in transportation and other business). It probably would be expensive. Kennedy policy would favor consumers over corporations and poor people over rich people. He'd be for arms reduction, nonproliferation and nuclear test bans. He'd be for Israeli security and he would initially have exuberant support from the American Jewish community, but he'd also press for a peace. What Kennedy stands for would not be too different from what Jimmy Carter stands for, it is true. But, boy, would he be different.

Of course there remains the question: Does he have character? What happens when Teddy Kennedy gets into a tight spot? He cheated in college, which is pardonable. But there is every reason to believe he lied about what happened at Chappaquiddick and has yet to tell the truth. Some of his friends say he's grown since then. Representative Mikva says that, yes, Kennedy failed two moral tests, but he must have passed a thousand we will never know about. Kennedy's character could affect the course of American history if he became president. Johnson's did. Nixon's did. We survived them both, and maybe Kennedy's flaws, whatever they are, should be discounted against his considerable merits. Fortunately, it's not something we have to decide today.