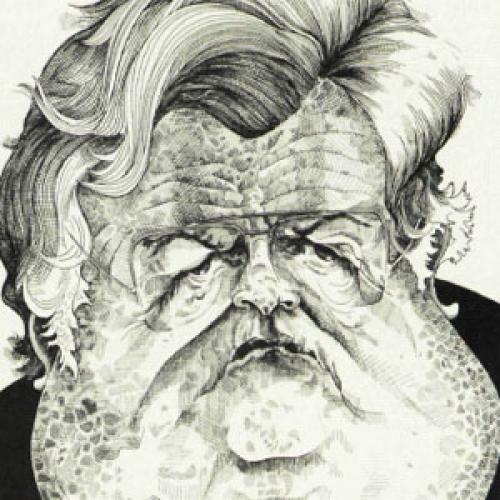 The elect and the elected, Robert Lowell said in "Washington in Spring," come here bright as dimes, and stay until they are soft and disheveled. As if acting out the line, there was Edward Moore Kennedy on the Senate Judiciary Committee, conjuring feelings of sympathy and support for Judge Bork every time he intervened. There is hardly a personal tragedy in the husk that he has so patently become, because there never was enough of a nut inside it for even a squirrel to nibble on. But the unthinking rodomontade with which he utters worn-out, supposedly liberal, platitudes does as much to remind the American people that the Democratic Party may be stuck in the dark ages as the rest of its lackluster, flabby spokesmen put together.

Kennedy makes even the "good causes" sound hollow. Those who are anxious that the Democratic Party should recover some sense of the time and world in which it must now act ought not to soften their criticisms of him. It is partly due to the example set by Kennedy and his shallow, smart-ass aides, with their sheen of cleverness, that liberalism is in its current state, Kennedy has the gift of making people wish the poor he appears to champion would get lost--and the homeless, and the hungry, the oppressed and the weary, and the peasants in the Third World, into whose rice bowls he pours the pottage of his bluster. The real point in the almost overnight subsidence of Joe Biden is not only that there never was anything but tepid air in that balloon, which shriveled at the first prick. It's that the Democratic Party seems determined to go on hoping to survive by plagiarizing its own past.

If he had lived, John F. Kennedy would have been 70 this year. The fact that it is impossible to visualize JFK as a septuagenarian is a tribute to the energy with which, even if it was only out of ambition, he occupied the present, and so made it possible to imagine a future that also could be occupied. Even those of us who have been severe critics of much of JFK's manner of governing can recognize, as many of his close acquaintances and supporters themselves say, that he grew by leaps and bounds as he moved from the House to the Senate to the threshold of the presidency, and then into the White House itself. Although he was pushed forward by his father, one can point almost to the moment in the 1960 campaign when he refused to be stuck where his father remained. He almost literally cut the cord binding him to his father's influence. But Edward Kennedy in 25 years in the Senate has shown no sign of growth.

The tragedy and the offense do not lie in him personally, but in the awesome rise of the Kennedy clan to the status of almost the royal family of the world, and its no less rapid decline into irrelevance. Edward Kennedy, trailing the clouds of glory from his elder brothers, has enough presence and aura to anchor the Democratic Party to a withered environment, a lunar landscape, in which it can find no sustenance, and offer none to the ordinary Americans who would dearly like to be able to vote for it again.

For all his self-advertised care for the poor of the world--his global, globular, empty compassion--Edward Kennedy is, as he appeared in the Bork hearings, an overfed, middle-aged yuppie, whose dewlaps flap when he recites the incantations pressed into his hands by his aides. It is hard to recall any other celebrated politician, on either side of the Atlantic, who has ever spoken so much, so tritely, with so little evidence that any wheels are turning inside his skull, Kennedy beats his big brass drum, and every time not only the lamb's-wool heads of the sticks but his fists go through the hide. At least Robert Kennedy was alarming enough to be feared. But Edward Kennedy? Who's afraid of the Big Bad Wolf?

He is always crying "Wolf!"--and no one jumps up and goes to his rescue or, more important, to the rescue of the downtrodden, on whose ills he rides as if they were his beasts of burden. Every image that the Democrats have to overcome--that they overtax the Middle Americans, try to meet social problems only with a proliferation of programs, are the junior partners of vociferous but marginal interest groups, look too carelessly at the credentials of the Third World movements and leaders, and neglect the security of the nation and of the free world--is kept alive by this buffoon.