You are using an outdated browser.
Please upgrade your browser
and improve your visit to our site.
Skip Navigation
The Sierra Club's strange bid to drain a lake. 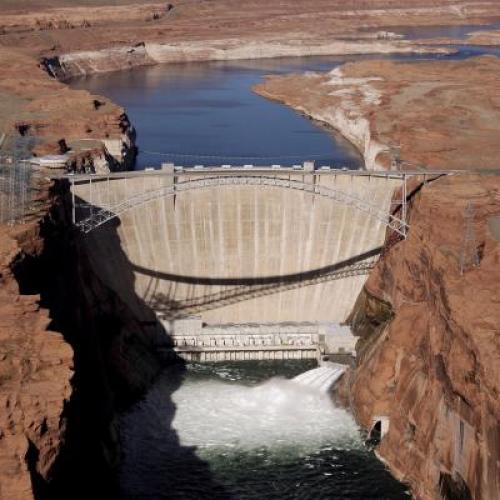 In the arid country around the Utah-Arizona border, where water is as precious as oil, Lake Powell is a 27-million-acre-foot, man-made oasis. Created in 1963 by the Glen Canyon Dam, it is one of those alterations of nature that makes the successful human habitation of the desert Southwest possible. Twenty million people depend on the lake for water, and some 400,000 households rely on the dam for hydroelectric power. The lake has also become a popular refuge for sun-scorched Southwesterners: tourists pump $500 million annually into the local economy. To many in the Southwest, Lake Powell and the Glen Canyon Dam are testaments to man's ability to harness nature's power and put it to productive use. As a federal official who helped oversee the construction of the dam once mused, "to have a deep blue lake where no lake was before seems to bring man a little closer to God."

But to environmentalists, the dam and the lake symbolize not so much man's ingenuity as man's arrogance. In radical environmental circles, it's long been a popular fantasy to drain Lake Powell. Edward Abbey's novelistic celebration of ecoterrorism, The Monkey Wrench Gang, discussed blowing up Glen Canyon Dam; and since 1981 the radical group Earth First! has occasionally talked about carrying out such an act. But few sober-minded people paid much attention. That is, until late last year, when the Sierra Club--one of the nation's largest, oldest, and most respected environmental groups--came forward with its own proposal to preserve the dam but drain the lake.

Since then, everyone from the Bureau of Reclamation commissioner to the Navajo Nation's natural resources director to houseboating enthusiasts has lined up to denounce the Sierra Club for giving legitimacy--and momentum--to the radical fantasy. Congressman Jim Hansen, a Utah Republican, held hearings this past September to expose the Sierra Club's plan. Colorado Senator Ben Nighthorse Campbell called it a "certifiable nut idea." In Page, Arizona--a town of 8,200 people that depends on the lake for power, water, and tourist dollars--residents are busy organizing against the Sierra Club. "There's no place for people in their equation," complains Joan Nevills-Staveley, director of the Page Chamber of Commerce. "If the lake goes, Page goes with it."

Of course, such outrage is exactly what the Sierra Club and its president, 24-year-old Adam Werbach, wanted when they launched their latest crusade. After years of steady movement into the mainstream, the most famous of all environmental groups is trying to stave off complacency by returning to a radical approach: confrontation. "As much as we've achieved, it's not enough," Werbach explains to me over tea at the Mayflower Hotel in Washington. "We don't think that just by fighting with the same techniques, the same stratagems, that we will be able to win."

The danger is that the new techniques may subvert the triumphs achieved by the old techniques. Most polling data shows that about 80 percent of Americans now consider themselves environmentalists. Whereas only a generation ago most Americans thought recycling was playing with garbage, today the practice is a staple of their everyday existence. Even anti-environmental Republicans--chastened by the 1996 elections--have toned down their rhetoric (even if they may not have changed their views). "Americans don't really view the environment as a political issue," explains Carl Pope, the Sierra Club's executive director, "because no one disagrees. The issue is such a consensus issue that no one thinks there's another side."

And so the Sierra Club, hoping that outrage can become an organizing tool, is searching for us-versus-them issues. In today's political climate, though, those aren't always easy to find. Take, for example, the Sierra Club's current fight against changes to the Endangered Species Act (ESA)--the legislation that, since its passage in 1973, has prevented the extinction of nearly 1,000 species. Although the modifications improve elements of the existing law--like providing incentives to private landowners to undertake conservation measures--and enjoy the support of both the Clinton administration and several green senators, the Sierra Club contends that the bill is insufficient and in some ways even weakens the ESA.

The Club may well be right. The problem is that its complaints center on a handful of the bill's most arcane provisions--like giving the Fish and Wildlife Service a maximum of only 60 days to object to federal projects on public lands--that aren't that easy to explain, let alone to get excited about. "There are no bright lines," says Melinda Pierce, the Sierra Club's lobbyist on ESA. "The problems and flaws of this bill are very detail-oriented and they're in a very complex law. That makes it difficult for us to talk about them in compelling ways."

The person the Sierra Club is counting on to make environmentalism compelling again is its twentysomething president, Werbach. A recent graduate of Brown University, Werbach was an insurgent even as a teen. In junior high, he organized a campaign against dissecting frogs in biology class. In college, he mobilized thousands of students against Senator John Kerry when the Massachusetts Democrat planned a Caribbean vacation during a critical environmental vote. With his heavily moussed hairstyle and penchant for quoting the cartoon dog Scooby Doo, Werbach represents more than just the Sierra Club's attempt to repackage itself as a young and hip organization. (Since he took the reins in May 1996, the group's official magazine, Sierra, has seen the average age of its readership drop from 42.7 to 37.2.) The real significance of Werbach's election as president of the Sierra Club is that it means the group is actually trying to reinvent itself. The Sierra Club is shifting away from its current role of watchdog, in which it guards primarily against violations of the hard-won national pro-environment consensus, and shifting back to its old role of crusader, in which it tries to generate a new consensus. To that end, the group has transferred about 80 percent of the money it once spent on lobbying the Hill to local organizing initiatives. It has created a virtual training academy to teach local activists how to run sophisticated grassroots campaigns, and a database to track how its members respond to its various "action alerts." "What matters is engaged public opinion, not just public opinion," says Pope.

But how do you get the public engaged? Most of the battles that sparked what Werbach enthusiastically calls "firebreathing activism" have already been fought. Even the global warming debate has narrowed to a fight over seemingly minor details. If the Sierra Club is going to be a crusader, it's going to need a crusade. And that's where draining Lake Powell comes in. "We're talking about something big here," gushes Werbach when the subject of the lake comes up. "If we want to actually look forward to the next step of the environmental movement," he says, "we're going to have to talk about proactively restoring parts of nature that have been destroyed." In other words: since enviros have no big battles left to fight, it's time for them to revisit the past battles they may have lost.

That includes the Sierra Club's defeat at Glen Canyon. The Club's long-time sage and current board member, 84-year-old David Brower, blames himself for the creation of the lake when he, as the Club's executive director in 1956, abandoned the fight he'd been waging against the construction of the dam. For him, the Sierra Club's current campaign is one of penance.

But, for the organization, it's an opportunity to fight a major battle, with bold, bright lines that everyone can see. The Club's call to drain Lake Powell has garnered more publicity--an A-section article in The New York Times, a feature piece on National Public Radio, and a slew of stories in the Rocky Mountain regional press--than its stands on the ESA or global warming. And, in some circles, it has won the Club new admirers. Werbach is right: the Sierra Club's plan to drain Lake Powell is compelling.

The trouble is, it may be compelling for the wrong reasons. In its attempt to find a crusade that pits enviros against the world, the Sierra Club may be succeeding only in restoring itself to "special interest" status. Even people who normally consider themselves environmentalists are finding themselves lined up with the antienvironmentalists on this one. "I've admired the Sierra Club ever since I was a little girl," says Nevills-Staveley of Page's Chamber of Commerce. "But this is just crazy."

Indeed, the Club's drainage plan doesn't even make much environmental sense. Though the Club maintains that the lake wastes the water it loses to evaporation, water that evaporates eventually returns to the earth as rain. In its effort to link the dam to damage done to the nearby Grand Canyon ecosystem, the Club ignores many of the positive effects the dam has had on that ecosystem. For instance, a number of endangered and threatened species--like the bald eagle, the peregrine falcon, and the Kanab ambersnail--flourish there only because the dam reduced the Colorado River's flow. "These species are using the modified conformation of the ecosystem to their advantage," explains Larry Stevens, a research ecologist who studies the Colorado River ecosystem. "We've had gains in biodiversity and habitat that really should be considered when thinking about river restoration."

Finally, the Sierra Club makes the aesthetic argument that the "natural majesty" of Glen Canyon is preferable to the houseboats of Lake Powell, and that if people could only know what they were missing, they'd drain the lake in an instant. "The wildness of Glen Canyon isn't well represented through legislation and policy," Werbach says. "It's something grander than that." Indeed, given current attitudes about the environment and conservation, it is doubtful that the Glen Canyon Dam would be built today. But it has been built, and consequently whatever majesty the canyon may have once had is likely gone.

Stevens, for one, thinks "the recovery of Glen Canyon as a biological entity is impossible." The seeps and springs that were the canyon's biological heart have been drowned. Resting at the bottom of the lake now, in all likelihood, are toxic sediments that, were the lake to be drained, could become airborne and harm people. Furthermore, the lake's water has whitewashed the canyon's walls so that, if the lake were drained, the restored canyon's only natural wonder would be the world's largest bathtub ring. Little wonder the Sierra Club's proposal has people so agitated. Then again, maybe that's the point.