You are using an outdated browser.
Please upgrade your browser
and improve your visit to our site.
Skip Navigation
America's future ally 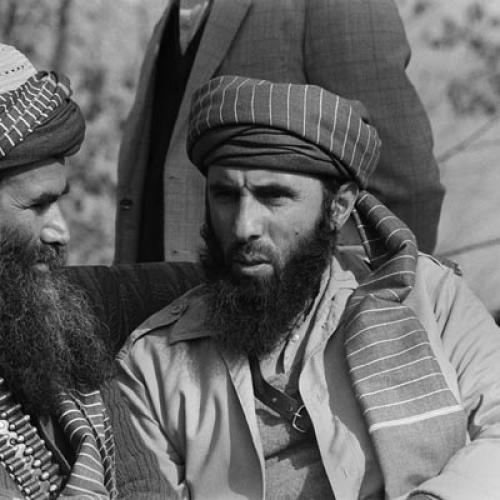 Amid the ruins of Kandahar, a Communist-held fortress in southern Afghanistan, the rattle of light machine-gun fire is so constant that the sheep, scared away by the crash of a stone, don't flinch from the sound of bullets. The city's population, once 180,000, is down to around 50,000, held hostage by Soviet and Afghan troops who are using the remaining civilians as a shield against the mujaheddin. But to no avail; the rebels are poised for an all-out assault. Within months, and maybe weeks, Kandahar-- the southernmost bastion of a Russian army since Czar Peter the Great's first southern campaign three centuries ago--will fall.

The Soviet military gained control of Kandahar by saturating the surrounding desert with tens of thousands of land mines, and then, for seven months in 1987, repeatedly bombing the city from the air; much of Kandahar now resembles a vast archaeological site. What the Kremlin has gotten for its exertions is Khe Sanh revisited: control of the airport and five square miles of a city that is surrounded and unceasingly harassed by mujaheddin units. Only heavily armed convoys of Soviet and Afghan regime troops run the gauntlet between the two positions. "We could capture Kandahar in 24 hours if we didn't care about civilian casualties," said Haji Abdel Latif, who at 83 is the most revered mujaheddin commander in the area. "But we have already given God over a million shaheedan [martyrs]. That is more than enough."

The Soviets, hoping that Afghan troops could hold the fort until the troop withdrawal deadline of February 15, had pulled their own troops out of Kandahar in late summer. Within days, however, the mujaheddin captured the city's grain silo and several government posts, drawing an untold number of Soviet troops back into the city. The Russians are backed by several thousand soldiers that they claim are drawn from northern Afghanistan. But Pakistan based observers and a group of Kandahar elders I interviewed asserted that these troops are actually mercenaries from Soviet Central Asia, who roam about the city in gangs, stealing at will from houses and shops, and abducting young boys for menial labor in military posts.

With Gotterdammerung approaching for Kandahar's unwelcome occupying troops, American prestige should be at an all-time high here. What one hears instead is a lot of bitterness concerning an aspect of America's Afghan policy that has baffled not only the mujaheddin, but Western diplomats as well. It seems that American policymakers have created an impression of spinelessness by allowing Pakistan to promote the ambitions of Gulbudding Hekmatyar, leader of the most radical, fundamentalist, and anti-American of the seven Afghan resistance parties. "I now have grave doubts about America," said Haji Latif. "Of all countries, why does America want to put an Afghan version of Qaddafi or Khomeini in power?" The root of the problem is this: though U.S. taxpayers foot the bill, the weapons that the mujaheddin get are distributed by the government of Pakistan, and specifically by the Interservices Security agency (ISI), Pakistan's version of the CIA. ISI's control of the arms pipeline is one of the many concessions the United States made to Pakistan's late President Zia ul-Haq in exchange for providing the mujaheddin with a rear base inside his country. In addition, it was hoped, the arrangement would prevent the United States from becoming entwined in the labyrinth of intra-Afghan guerrilla rivalries. But the distribution ratio worked out by ISI furthered Zia's interests in Afghanistan more than it did America's or even the mujaheddin's. Zia--like the Zia-installed clique still running ISI-- always tried to provide Hekmatyar with a disproportionate share of arms and political aid. After all, Hekmatyar used the language of Islamic fundamentalism as a tool of power in much the same fashion as did Zia himself. Hekmatyar was also an ethnic Pukhtun who was not a Pukhtun nationalist, and thus would not stir up Pakistan's own Pukhtun population in the Northwest Frontier Province bordering Afghanistan. But most of all, because Hekmatyar was militarily weak inside Afghanistan, lacking the grass-roots support enjoyed by other resistance leaders, Zia could more easily control him.

The Americans played along with this policy, following logic that went something like this: if the Pakistanis think they can impose their will on the Afghans--something neither the British nor the Russians could do--well, let them try; America is certainly not going to get into a public shouting match with Pakistan over an Afghan guerrilla leader who is bound to falter. American officials further rationalized that Hekmatyar's Hizb-i-Islami (Party of Islam) was playing a larger role in the fighting than many gave it credit for. (Most Western relief workers and journalists who have traveled with the mujaheddin inside Afghanistan would dispute this. There are even suggestions that rather than fight the Soviets, Hekmatyar has been storing the arms he gets for an eventual battle with other resistance parties once the Communists are defeated.) Nonetheless, before their deaths in the August 17 plane crash, U.S. Ambassador to Pakistan Arnold Raphel had been privately urging Zia to effect a more equitable distribution of arms among the mujaheddin groups. The one positive side effect of Zia's death, it was supposed, was that Hekmatyar was bound to get less support from Pakistan.

But several weeks after the crash, as the fall of Kandahar looked imminent and several mujaheddin parties were talking with the Communist governor of the city about a peaceful surrender, the Pakistanis sponsored Hekmatyar on a visit to the Kandahar region that led to the collapse of negotiations. This caused such diverse mujaheddin factions as the National Islamic Front of Afghanistan (NIFA), led by Westernized, urban aristocrats, and the peasant fundamentalists of Yunus Khalis's own, less extreme Hizb-i- Islami to start talking in one tongue--against the Americans and the Pakistanis for propping up Hekmatyar just when his star was starting to descend. "Kandahar would fall with a lot less bloodshed if the Pakistanis would just butt out," said an angry NIFA official. "Or if the Americans would just butt in to keep the Pakistanis out." A spokesman for Khalis's Hizb-i-Islami added: "Be sure that Culbudding Hekmatyar's visit to Kandahar was a disaster and a disgrace." What scares both the moderates and the other fundamentalists is that Hekmatyar has been using his vast quantities of American weapons to "buy" commanders, thereby increasing his field strength.

One reason the Americans are willing to back Hekmatyar is that they, and the Pakistanis, fear a transfer of power in Kandahar to a pro-royalist group like NIFA. Were the Afghan Communists to deliver the city to NIFA, then ex-King Zahir Shah might conceivably be persuaded to return here, an event that would tear the resistance apart, since the 73-year-old king is anathema to all the fundamentalist parties. When Kandahar falls, neither ISI nor the United States wants NIFA and other royalist elements to have any part in the victory. Moreover, American officials know that regardless of who wins the November election in Pakistan, ISI--which, unlike the CIA, boasts a military force all its own--is going to be the single most important factor in the Pakistani political equation for years to come; and U.S. acquiescence on the issue of Hekmatyar will foster a smooth working relationship with ISI.

What gets lost in this preoccupation with Pakistani- American relations is Afghanistan itself, and the real U.S. interests there. If Hekmatyar is in a position of dominance after the Soviet pullout, the nation will be plunged into a bloody civil war; he has no legitimate power base and is detested by other rebel groups. And whoever wins the civil war, the United States will lose; on one side will be Hekmatyar's visceraily anti-American Party of Islam, and on the other side will be an array of rebel groups that will feel betrayed by the United States.

American officials now supporting Pakistani policy may try to console themselves with the knowledge that a Hekmatyar-influenced Afghanistan is the ultimate Soviet nightmare. It is only from Hekmatyar's mujaheddin that one hears talk about extending the jihad over the Oxus River into heavily Islamic sectors of Soviet territory once all of Afghanistan is liberated. And while the American officials don't want massive civilian deaths when Communist-held Afghan cities start to tumble, they also don't want the Communist defeat obscured by last-minute mujaheddin compromises with Soviet-installed Afghans. So if it turns out that Kandahar and Kabul fall amid pitched street fighting, with Russian soldiers "clinging to the helicopters" a la Vietnam, there is going to be a lot of chuckling in Washington and at the American Embassy in Islamabad.

The problem is that while the Soviets richly deserve such a fate, the Afghan people don't.