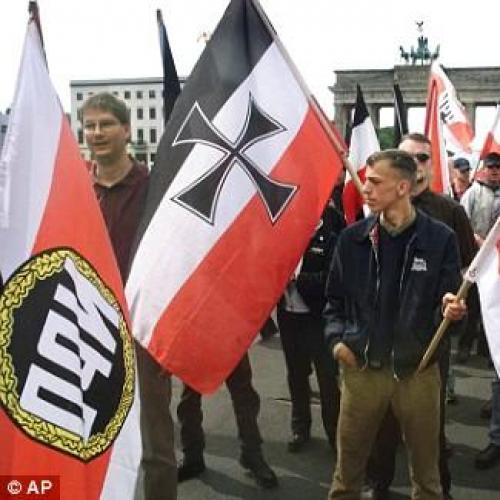 Sitting in a squatter house in the eastern German city of Halle, a house that smelled of sweat and stale beer, listening to a chubby ex-cook spouting neo-Nazi propaganda, leafing through a pamphlet honoring Rudolf Hess, and being bossed about by another blond boy in leather trousers and suspenders who called himself a Gauleiter--and all this on the anniversary of the Kristallnacht pogrom of 1938--I thought of Rimbaud's words in the African desert: “What am I doing here?”

It all started with a newspaper article that had appeared the previous week. According to this article, on November 9, the anniversary of the fall of the Berlin Wall as well as of Kristallnacht and the failed Hitler putsch of 1923, neo-Nazis from all over Germany would gather in Halle to commemorate the occasion. Reason enough, I thought, to check out the action.

Like all former GDR cities, Halle stinks of brown coal and chemical pollution. The air is so bad it makes your eyes water. The place also looks as though it were just bombed: fine old houses stand in ruin, windows are blown out, roofs have caved in, and the streets are full of holes. But for the brand-new shops, mostly west German chain stores, it feels a bit like walking around a huge studio backlot for a film set in 1945. The strange atmosphere is intensified by the graffiti: “Nazis Out!” “Destroy the Nazis!” “Kill the Fascists!”

Shops, cafes, and restaurants were all locked up on November 9. The people were frightened, we were told, frightened of Nazis. After we knocked for a long time at the door of a coffee shop, the burly owner let us in briefly. He had a gun on his counter. “You never know what might happen here,” he said. “It wasn't like this under Honecker,” muttered a man in a thick overcoat, as he plunged a knife into a thick Thuringian sausage.

It seemed as though the town were under police occupation. Every street and square was blocked off by cops. Armored vehicles with water cannon patrolled the main streets. Riot squads and border police were putting up barricades. On the market square, in front of the handsome old church, wild-eyed “anti-fascists,” belonging to the Spartakist League, screamed: “Out! Out! Out! Nazis out!” Leaflets were handed out, warning the burghers that another Kristallnacht was at hand. Nervous citizens crowded round the new mayor, a tall man from west Germany who towered over the people like a teacher in the midst of his charges. He had the patient voice of a dedicated schoolmaster.

“Why are those Nazis allowed to come and demonstrate here?” asked one irate citizen. “Why can't they be banished?” That, after all, was how troublemakers were dealt with before. “Well,” explained the mayor, “we are living in a democracy now, and as long as they don't use violence, they can come and say what they want, even if we don't agree with them. That is what it means to have rule of law.” An elderly man with thick glasses would have none of this: “That's how Adolf came to power. It's just like in 1932. They let it happen then too. Ach, what rule of law!”

The only thing lacking in all this commotion of nervous citizens, hysterical anti-fascists, and busy riot policemen were the Nazis themselves. They were nowhere to be seen, or heard. One only heard about them. About the thousands who were gathering as we spoke; about the squatter house, occupied by the “Gauleiter” and his followers, who were about to attack foreigners with Molotov cocktails and knives.

So we went to the local police headquarters to find out where the Nazis were. The press officer was an overweight man with a soft baby mouth and cowboy boots. He couldn't tell us where the Nazis were but promised that the Einsatzgruppen stood ready. This was reassuring but not helpful.

Perhaps the Nazi squatter house was a better place to ask. I had hoped to see the Gauleiter. Instead his mother came out, surrounded by a group of thin, blond teenagers. She told us that Thomas, the Gauleiter, was in town demonstrating, but we might want to come back for a “press conference” in the evening.

It was all rather disappointing and we were ready to give up our quest, when we suddenly heard a familiar sound, familiar, that is, from countless newsreels and films: “Sieg Heil! Sieg Heil! Sieg Heil!” The sound came from a square not far from the city center. It was one of those squares that had not changed since the war: spooky, red-brick, turn-of-the-century houses, now black with grime; dark, uninviting cafes; faces peering furtively through lace curtains, hoping to see but not to be involved. There they were at last: the Nazis! About 200 of them. Not many, compared with the 1,500 policemen mobilized to check them, but Nazis nonetheless. Or at least they looked the part.

There were boys with Hitler hairdos, with shaved backs and sides. There were teenagers in black boots. There was an old, shabby man who handed out signatures. There was a girl in black uniform and white "folkish" socks, who had dyed her dark hair blond. There were speeches about reconquering Great Germany, from Cologne to Konigsberg (formerly Kaliningrad). And there was the usual stuff about Germany for the Germans, free from the polluting presence of aliens. November 9, 1989, was remembered because, “It was us, the youth of Germany, that defeated communism,” and the same date in 1938 was commemorated not for the Kristallnacht, but for the murder of the German diplomat Von Rath by “the Jew” Grynzspan, which served as its excuse.

It was an unpleasant sight, but not an especially frightening one. The whole thing was so theatrical, so paltry, so, well, old-fashioned, that it was difficult to take these young people seriously. The fact that they were German, behaving this way in Germany, and not French rowdies in France, was the main reason for all the fuss. To be sure, some of the young men looked menacing, and no doubt, in packs, on the prowl for foreigners, they were.

Although German neo-Nazis, on the whole, are not noted for their sense of humor, some of them might actually have been aware of the absurdity of their charade. Later that day the Gauleiter ushered us in to the “press conference” with the words: “Come in, remove your clothes, and get ready for the showers.” It was a bad joke, but somehow in keeping with the grotesque atmosphere of the whole occasion. These people could cause trouble, on dark nights, in sooty cities. But it is difficult to imagine how they could take over anything much bigger than a squatter house.

And, by the way, I forgot to mention this: the main speaker was a pasty-faced Austrian.