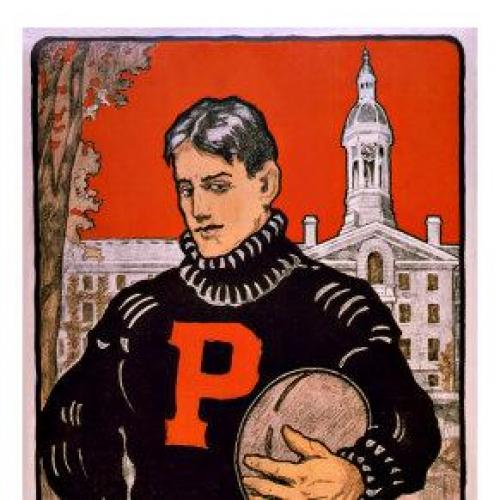 This article was originally published on November 26, 1930.

DURING the latest War (some superstition always makes me refrain from saying "the last"), some patriotic individual conceived and executed the patriotic idea of distributing printed precepts among the civilian population. The cards read: "Obey the law and keep your mouth shut." What could he simpler or more to the point? The country was at war, to all intents and purposes we were under martial law; yours, then, not to reason why, yours but to keep your mouth shut—or take the consequences. We learn with every war the increasing truth that in time of war, expediency must rule: that the bill of rights must be suspended, that free speech must be suspended, that the individual conscience must keep quiet before the loud will of the majority.

We know (not only from fiction and the utterances of generals, but from recent experience) that professional soldiers look on war as a game. We should also be aware that professional football coaches look on football as a war. The two, in fact, are indistinguishable, and at every point.

At the university which it was my privilege to attend we once had a football team. It had glorious traditions; that particular year it was hoped that laurels might even be added to the fading pile. The night before our team went off to play our chief rival, our rulers decreed the customary mass meeting. It would he impossible to explain one of these gatherings to a foreigner, but every American will understand how necessary it is for Americans, before embarking on any desperate project, to stiffen the sinews, summon up the blood and arouse every latent corpuscle of virile spirit by exhortations, songs, boasts and frenzied yelling. It was at that meeting I first heard it definitely announced, by no less an authority than the coach himself, that the people who thought football was a game—were crazy. Football, said he, is not a game, it's a war! It was a popular decision; the roof very nearly came off. At the moment, I took his words as a laudable exaggeration, but a few moments' reflection convinced me that he was right. After all, were not we, packed undistinguished among the benches, hoarse from loyalty, really the inferior classes of a proud tribe; were not those dozen scarred warriors there on the platform our Samurai caste? Were they not about to sally forth to give their all (they had each promised it) for us, for the honor and glory of the tribe; would they not bring dishonor to a vanquished foe? Certainly that was our idea.

A moment later the coach added significant fuel to the leaping flames. With sternest sarcasm he enquired of us how we were planning to comport ourselves, this imminent Saturday, in the face of our enemies. Were we going to sidle politely along their  thoroughfares, as meek as Moses? Or were we going to tread those enemy pavements as if we owned the town? Amenacing roar gave the right answer. Pleased, but not to satiety, the speaker added his final command: if, or rather when, we encountered any of the hated foe, far from yielding them room or passing them peaceably, we were to remember who we were, and shove 'em off! Now at last we knew where we were. It was to be war: force, force to the utmost, force without stint or—what are the professorial words? The coach put it just as effectively.

Without football, American colleges could not exist; they would become religious seminaries, or academies of learning, or perhaps educational institutions. As things are, the American college is a little state of its own, with more than a hint of Ruritania in its make-up, but with a fiercely nationalistic spirit—especially in football season. These little states, naturally, are ranked according to their prowess in war. Time was when the Great Powers (Harvard, Yale and Princeton) ruled the roost, but times change, and now other ententes, big and little, are more and more openly challenging for the supremacy. In a vainly dignified effort (which fooled nobody) to keep the warfare within civilized bounds, the Great Powers met in an arbitration conference a few years ago, and decided on a kind of limitation of armament: they agreed not to begin battle practice before a certain date each year, and not to spy on each other. Then, too,there is a general League of Nations, whose promulgations of international law are both more definite and more enforceable than those of its Genevan prototype; for all football states obey the letter, if not the spirit, of its sometimes silly and usually experimental regulations.

But of late years there has been a growing discontent with all this regulating machinery. War (that is, football), growl the big-navy men, is being legislated out of existence; with all these namby-pamby rules we shall soon have a nation of softies, and had better turn our attention totiddly-winks. A successful campaign still mollifies these grumblers, temporarily. But woe to that nation whose army is vanquished! Its old men rise in their wrath and demand the blood of the traitor. One unsuccessful campaign they can forgive, for they know the fortunes of war; but two is one too many? Something must be rotten somewhere in the state. Unless the unlucky commander-in-chief has an ironbound contract, with several years to run, he is apt to be the victim. But sometimes the angry mob will not be so easily appeased.

I said a little earlier that my university once had a football team. I am afraid I was being a little bitter. For I am a member of a conquered race; this year has been the blackest in all our football annals. Every week has brought its fresh disaster; nothing quite like it has ever happened before. The political situation, in consequence, grows threatening. We know from history that a disastrous war brings revolution in its wake. In this case, the rising mutter of the citizens is not directed against the commander-in-chief (an aged general, he is almost at the retirement age) but at the government itself; the very monarchy is threatened. Wherever two or three alumni are gathered together, you may hear this threat made vocal. "The Dean must go. . . . We need new blood. . . . What can you exppect, the way they make those fellows work now? . . . Just a lot of tea-drinkers down there."

It is a serious business. For if a college cannot win football games, its very existence becomes precarious. Not only do its conquerors exact a cash tribute from the civilian population, but the prestige of the whole state suffers; punier freshman children are born into it, the warrior material in disgust goes elsewhere. Shades of old heroes angrily harangue any who will listen. The citizens creep about the streets, bowed with their shame, a target for well deserved taunts. Business suffers. Digestions suffer. Souls grow perceptibly less noble.

Well, if the revolution comes, as doubtless it will (for these are Nazis, not Communists), it is my patriotic hope that we shall not return to the old order of things. War may be a game, but it is not a game to be politely regulated. In the near future, when we have exiled our commander-in-chief, and kicked out the present degenerate government, let us enthrone a real Duce, who will concentrate all his activities on once again making us a warrior race. It may take a little time, but a dictator can do it. And when he has brought us to The Day, then let our enemies tremble! War is no longer confined to mercenary armies; there are, there should be, no noncombatants. Need I say more?