Of time and the Crimson Tide. 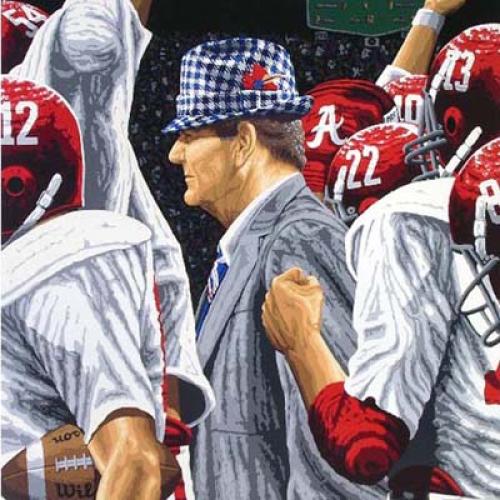 According to the University of Alabama football records, the date would have to have been September 27, 1958. I was in the back seat of a 1957 Dodge, hurtling down the long lap of Alabama from Birmingham toward the bleak gumbo prairie south of Montgomery, past the roadside cafe of a man who entertained customers by brandishing the shotgun he would use in case “the niggers” tried to eat barbecue at his counter. We were on a sporting venture of some kind, bound for a cabin in the pinelands. I was fifteen years old. My elders sat in the front seat fiddling with the radio that, on a maddeningly intermittent signal, brought astounding news from Mobile. The University of Alabama, which had won four games in the previous three years, was ahead of Louisiana State University, the predicted national champion. Finally, Alabama lost, but not before it was clear that the new coach was a serious citizen. That is my first memory of Bear Bryant. Now, two hundred eighty-seven games and twenty-five years of adulation later, after coaching more victories than anyone in the history of college football, the old man is retiring.

In the past few weeks, the hagiographers of the sports pages and the announcing booth have worked him over pretty well. But before he is enshrined forever as an Icon of Sports, it is worth remembering that Paul William Bryant Jr. was also a public man who lived in a poor and troubled state at a grim time. The year 1958, when Bryant fielded his first Alabama team, was also the year in which George C. Wallace made his first campaign for governor. Throughout the 1960s and 1970s, these two men were the dominant figures of public life in Alabama and the state’s main representatives to the nation. In that time, they so dominated the consciousness of the state that it is only in relation to Wallace that we can understand the service that Bear Bryant did Alabama and how, like so many lesser men, he also failed that state in the midnight of its humiliation.

In somewhat the same way that friendly businesses launder money for the Mafia, some friendly journals, most recently Time magazine, have laundered Wallace’s reputation into that of a harmless folk character whose youthful aberrations can be dismissed with the mildly pejorative sobriquet, “former segregationist” That is not the way it was. To become governor, Wallace made a pact with evil that required him to publicize the fiction that Alabama’s police and courts were powerless to prevent violence up to and including murder. The state’s poor, uneducated whites, their passions stirred by racial bugaboos a century in the making, went where this man led them. Without straining my memory, I can think of eight blacks and three sympathetic whites who were either shot to death or blown up in Wallace’s first term.

To be sure, Wallace’s claque loved him. But there were also thousands of Alabamians smart enough to hate Wallace for giving them cause for shame so strong it could be felt as a physical symptom, something that rose up in the throat like a knot of vomit. The record is pretty strong that Bryant shared this contempt for Wallace. He is credited with working behind the scenes to help Frank A. Rose, the university president, tone down Wallace’s behavior during the governor’s Stand in the Schoolhouse Door at the university in 1963. Later there was an attempt to draft Bryant to run for governor against Wallace, and he flirted with the idea. But in the end, Bryant decided against confronting Wallace publicly. In making that decision, Bryant did no worse than other wealthy or progressive or educated Alabamians who feared Wallace or feared Klan reprisal or feared being taken for a “nigger lover.” The leadership of the state was paralyzed by the slick-haired little pol with the spittle-stained cigar jutting from his truculent pan of a face. But there was one difference between Bryant and the other Alabamians who backed down, and that is the pity of it. Bear Bryant was big enough to have taken on Wallace, and he would not necessarily have had to give up football and run for office to do it. If he had offered one clear-cut public gesture of condemnation, who knows what might have been spared that benighted state?

For in Alabama Bryant became a revered personage with dumbfounding speed. His rise to prominence paralleled Wallace’s and, in the early years, outstripped it. Only four seasons after that first game in Mobile in 1958, Alabama won the national championship, While Bryant was transforming the Crimson Tide, Wallace was transforming himself. Running as a racial moderate, he lost the 1958 gubernatorial race. Running as the Klan candidate, he won in 1962—and promised “segregation forever.” In 1964, when the Civil Rights Act was passed, largely in reaction to the Wallace condoned police attacks on Birmingham blacks in the previous year, Alabama won another national championship. In 1965, when the Voting Rights Act was passed, largely in reaction to the Wallace-excused violence on the Selma March, Alabama won again.

By this time, veneration of Bryant was at a peak. Three national championships in five years gave him a cult following that Wallace never matched. But Bryant, who had declined to confront Wallace for spiritual leadership of the state in the time of violence, also declined to let his team lead the way as a model of peaceful desegregation in the calmer days of the late 1960s. Not until 1971, when Alabama was already one of the most fully integrated states in the union, would the university field its first black players. Bryant left it to federal judges and obscure school superintendents to bear the burden of desegregating public education in Alabama.

Even so, Bryant led the state to a turning point in its racial psychology, and that brings us to the positive side of his legacy. Ironically, the vehicle for this leadership was the 1965 team, which was the last all-white squad from any college to win a national football title. In preparing that team for an Orange Bowl game with an integrated Nebraska team, Bryant provided an example of simple decency around which the state could rally. He enforced a rigid discipline of sportsmanship on the team that went beyond a ban on dirty tactics and racial taunts. The Alabama players’ insistence on helping fallen opponents to their feet bordered on the comic, but the intention was not to humiliate or patronize their rivals. It was, as everyone in Alabama knew, to show the national sports audience that the state’s football team was more civilized than its governor. Alabama played with a kind of desperate politeness, and afterward one could sense a palpable statewide resistance, especially in the press and political community, to interpreting the victory as a triumph of white supremacy. In Birmingham, I heard a talk show host hang up on a caller for suggesting as much. The behavior of that football team reflected a change that was going on in the psyche of a state weary of racial confrontation and the serial embarrassments of Wallace’s first three years in office. If Bryant had refused to confront Wallace, his team had at least shown that Alabamians were capable of sane conduct in a racially charged environment.

Seventeen years later, it seems odd that a football game could play a role in shaping the public mentality. But Alabama in those days was a still pond in which even the tiniest pebble of humane behavior made a big ripple. Having lived in the state in that time, I am convinced that Bryant and the Alabama football team played a more generalized, although inadvertent, role in controlling what the author Carl Carmer called the state’s “old irresistible urge” toward racial violence. That urge arose in large measure from white Alabama’s ingrained feelings of inferiority and guilt over its racial history, its schools, its police, and, of course, the politicians it elected. Bryant and his teams provided a diversion from the old compulsions. They gave the state at least one thing to be proud of when Wallace was making it an object of opprobrium. If Bryant never stood up to Wallace as he might have, he at least forced the little man to share center stage, and the coach’s huge, calm presence made Wallace look small and shrill.

So there it stands. With Bryant we have seen the end of something. Wallace, for his part, used the year of Bryant’s retirement to win another term as governor. Even now, I am sure that somewhere in America there is a reporter preparing to fly south to file a dispatch characterizing Wallace as a durable old populist whose monument will be a redemptive spate of good works for the little people. It is not to be. Wallace has reached an accommodation with the coal interests. His final monument will be built by strip miners who are even now turning the lovely hills of North Alabama into a rubble that it will break your heart to see.

And Coach Bryant—what of him? He, of course, willenter that pantheon of Dixie nostalgia where George can never go. In part, this is because Bryant offers memories of victory rather than defeat, but the reasons go deeper than that. Alabamians may elect raucous bumpkins, but they do not like to be thought of as the kind of people who would associate with them. If Wallace represented Alabama’s reality, Bryant was its aspiration.

Even dating back to the Civil War, Alabama’s history had been more grubby than grand; its heroes were small bore. But in Bear Bryant, with his big frame and the crumpled face that looks like the relief map of a river system, Alabama at last had a hero of mythic scale. And if he failed, by keeping quiet when he might have spoken, and by staying perhaps a season too long, at least he was never common.

For that, many Alabamians will remember him fondly and miss him, and I count myself in their number. On December 29, I watched the broadcast of Bryant’s last game. It was a victory just solid enough to arouse the hope that what is called “Alabama’s winning tradition” can go on without him. But after twenty-five years in the stands, in front of television sets, and, later, hunched over radios in distant cities where the signal from home was almost too faint to hear, I am tempted to announce my retirement as an Alabama fan. It can, after all, never be as good again. And believe me, to have been in the city of Tuscaloosa in October when you were young and full of Early Times and had a shining Alabama girl by your side—to have had all that and then to have seen those red shirts pour onto the field, and, then, coming behind them, with that inexorable big cat walk of his, the man himself, The Bear—that was very good indeed.

Howell Raines is a Washington correspondent for The New York Times.