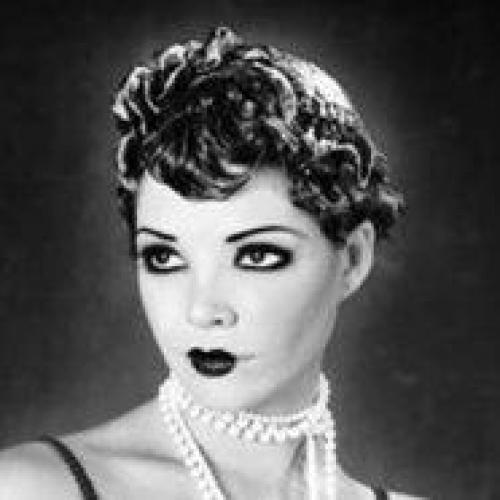 I knocked at her room, but no one answered; then, as the door stood hall open, I went in. The lights were all left on, though it was noon, and the chairs littered with stockings and chemises, as sordid and as surprisingly slight as the shreds of exploded balloons. On the table stood an empty spaghetti can, two plates gummed with cold tomato sauce, several tumblers with the stale remains of drinks and an empty gin bottle. From the contents of the tumblers, I could see that they had begun by drinking gin and ginger-ale, fallen back on gin and bath-room water and probably ended with raw gin. I sat down in a mission morris-chair and looked through Film Fun and the Cosmopolitan. Then, with the magazines in my lap, I remained staring and inert. I knew that, since I had come too late to catch her in the morning, she would not now be back till late afternoon; but, suddenly becalmed in that empty apartment, high aloft on that inaccessible floor, with the elevator between me and the street, I felt as if I had dropped out of the chatter and haste of the lunch hour of the West Forties into some deep unexpected air-pocket of lassitude and calm. I could not for a moment bring myself to go down and face the business of the day again nor even to grapple with the present situation by unearthing a piece of paper and composing a note.

There was a small phonograph beside me on a table: for a few minutes I regarded it stupidly. Since she was gone, it seemed as lifeless as the glasses, as the garments, as the magazines. I had never found it very agreeable, and such vitality and charm as it possessed it had derived solely from her: I should never at first have thought of playing it. But, after a time, I picked up a heap of records which lay shuffled and thrown about on the table, like the battered pack of playing-cards beside them: I pushed them evenand looked at the titles, one by one: Yessir, That's My Baby, sung by Bee Brewster; With You in Paradise, Fox Trot, from Pretty Kitty; Ben Bolt, by John McCormack; Thanks for the Buggy-Ride, Fox Trot, by Jake King and His Eight Kentucky Mocking-Birds; The Village Blacksmith Owns the Village Now, Comic Song, by Billy Murray; Chanson Hindou, Saxophone Solo; So's Your Old Man, Fox Trot, by Fred Casey and His Burglar-Alarm Boys; La Forza del Destino, Red Seal, Duet by Caruso and Scotti. The names awakened flickering memories of the establishments in which they had been acquired: Ben Bolt and La Forza del Destino, with some of the older popular songs, had been bought when the phonograph was new during some prehistoric period of married life, from whose wreck she had salvaged them; the comic songs supplied by a young newspaper man, who had been in the habit of learning them by heart; the later fox trots contributed by a girl-friend who had at one time shared an apartment with her and entertained there (until finally she gave him up) a too frugal admirer, shy of night-clubs; and Shake That Thing and Chanson Hindou she had provided herself.

I picked out a record I had never heard, with Charleston Chuckles (Risas de Charleston), Fox Trot, on one side of it and Flamin' Mamie (Ardiente Vampiresa), Fox Trot, on the other: it had been made by the American Melody Company and seemed to have been molded in river mud. I turned over Flamin' Mamie and wound the phonograph up. The only needles I could find were in an ash-tray, mixed with burnt matches and cigarette butts, and I found it impossible to tell the used from the new: all seemed equally blunt. The truth was that needles were never changed till they became absolutely inarticulate. But, with the first one I tried, the record blurted out in such a hideous stuttering blur that I thought I must have a particularly bad one and put in another. But the result was the same. I endured it to see if it would clear. Presently it emerged as a fiendish mechanical jig running itself off at impossible speed: too fast, too nasal, too high. I turned it down: a harrowing descent of pitch heard as a gasping and discordant howl, as if the spirit of the machine found it painful to be reduced from one tempo to another. Not, I reflected, that at any tempo did the spirit seem particularly at ease. For one thing, the spring of the phonograph only held for a single winding, so that the records always began too fast and were running down before the end. And, what was worse, the small portable machine was constructed without a horn, so that it always made me feel uncomfortable by reason of its almost cruel effect of allowing no natural outlet to its voice. That wretched spirit, released inside the box, beating like a bat in the cramped black space, had to force its way out through the cracks and through a small aperture at the base of the "arm." It was never fairly given to the air, it found no trumpet to launch it on its flight. No wonder it chittered and squealed so thinly, like an unwinding wire of sound, like a wire rusted, wry and eaten, worn away so that it seemed almost snapping or so rough that it would stick and stammer over some echolaliac phrase. So completely had the music been robbed of resonance that it seemed a mere memorandum of music, as if some writer in sound had scribbled down the skeleton of an orchestration, with the brasses as brief raspings and tin-whistle blasts, the strings a jotted jingle of cicada-chirpings and the tympani marked as tiny explosions and echoless crashes of glass. And the "vocal refrain," when it suddenly began, seemed to have as little in common with the human voice as the orchestra with musical instruments: it was like some mere momentary modulation in the quick mechanical jigging of a railroad train, a sharper shrillness, a more insistent iteration: Flamin' Mamie—Surefire vamp—Hottes' baby in town—Some scorcher—Loves torture—Gal that burns 'em down—Talk about your red-hot mammas—Not one compares—indistinguishable crackle of high-pitched syllables articulated too close together—Comes to lovin'—She's an oven—another slip of driven cogs—Ain't it funny—Paper money—Burns right in her hand—some incoherent statement about workin' in a mine—Ate a bo.x o' matches at the age of nine—Flamin' Mamie—Sure-fire vamp—hottes' baby in town. The jazz departed with redoubled violence and complexities of deformation into a last frantic charivari; then, after a flourish, was bitten off as abruptly as it began.

I lifted the needle, clicked the little catch and stood a moment looking out the window. Outside, gaped a blank abyss: several buildings had been demolished and the vacuum of vacancy they had left seemed to be sucking with blind raw walls for some more solid and tight-fitting structure to rush in and fill it. I had always known that that phonograph was unspeakable: but I had never been alone with it before and it affected me with a kind of terror. And I had to summon against the action of the machine, against that barren negation of flesh and blood, the vision of her alert yellow head with its deep stainings of Irish rust, her lips still moist through carnation rouge and the robust organism of her body, which made its home among those stone and metal cells, not merely resilient to their surface, but causing their grindings to quicken and feed it.