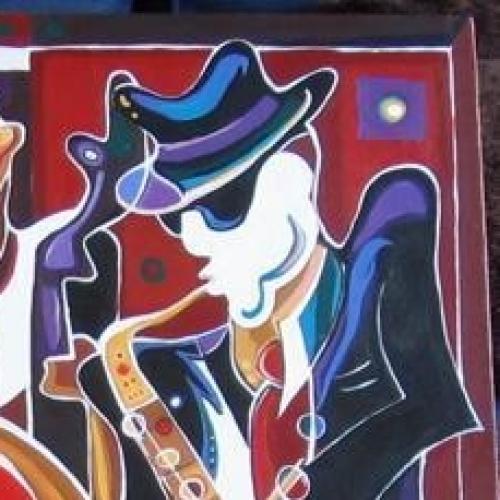 "How 'bout yuh?" says the boy from the city-desk, running into friends on Canal Street. "Which way yuh goin'? Come on along an' get a drink. I'm just goitn' to stop into the Red Crescent and have a couple o' drinks before I go home." "I'm on the wagon now, Charley," says the artist; the Tulane student has to work. Inside the bar, the white-coated mulatto boy serves them all around "Before you drink any o' that," says the bartender, "I just want you to taste this." He brings out a whiskey bottle and pours a little in a small glass. “This here's the real thing," he announces. "First real stuff I've seen in a year! Just taste it!" "That's the real thing, all right!" Charley meets him with enthusiasm. The artist orders another round. "This stuff is all right, though," says the student. "Won't do you any harm, anyway!" "I’d be dead if it did!" says the bar-tender. "It's just straight Cuban alcohol, with a little caramel flavoring." The artist, contemplating the bar-tender through the crystal of those two late drinks, sees him glow with benevolent radiance: the old-fashioned type! I he reflects, the barrel-girth, the tight ruddy skin, the distinguished silver hairs: he won't lie about bad whiskey! "Look at that bead!" the bar-tender exclaims. "See how it lasts! Look at that! Ever see any bead like that around town?" To Charley, the bead seems as durable and as precious as a jewel; the student stares at a picture of a race-horse, unglazed and yellow with age: what a beautiful creature a horse is! what a magnificent occasion the Derby! he wonders whether he has made a mistake in going to college, instead of following the races in his youth, as Sherwood Anderson did. "No: never bothered me yet," says the bar-tender in answer to a question from Charley. "Be funny if they did come in here and see everything right out, like it is—just like an old-time bar: whiskey open on the counter—jug o' this other stuff—couple o' cases o' beer! They'd say: 'Guess you ain't heard about Prohibition!—didn't know that law had been passed!' " Everybody laughs; the student orders another round.

A long-legged gawky Negro with a guitar comes in from the street. "Let's have a little music!" says Charley. "I gotta sit down to play," says the Negro. "Come inside, boys," says the bar-tender. "Come inside and mako yourselves comfortable!" Inside, they make a circle of chairs and the Negro begins to strum:

"Down in New Orleans—dance that's new!

I’m sick and tired tellin' you to shake that thing!"

"Bring him a drink!" orders Charley, nodding in the direction of the guitarist, as the boy serves another round. At a word from the waiter, the bar-tender goes out and brings back an enormous man with a fixed glare and a wooden leg. "That's a detective," whispers Charley to the artist. The detective sweeps the room with a glance, then sits down and Swallows a drink.

Got a hump in his back from shakin' that thing!"

Everybody laughs loudly; the detective smiles; he recognizes Charley and nods. "How 'bout yuh?" says Charley; "How about yuh?" says the detective. "What raciness! what wit!" reflects the student. "How unabashedly Dionysian in the face of the white man's conventions!" "Bring another round—on the house," the bar-tender orders the waiter. "That's a swell picture! " says Charley to their host, indicating a tarnished classical landscape, in the foreground of which oriental beauties arc lolling on tiger-skins. "Don't see many like that any more!" "Wouldn't take a hundred and fifty dollars for it!" replies the bar-tender. "Gettin' piped himself!" Whispers Charley.

"Story for yuh over on Royal Street tonight," says the detective confidentially to Charley. "Organ-grinder's monkey got away and got into Betty Johnson's." Charley laughs extravagantly. "All the girls came out on the galleries and began to holler bloody-murder. Couldn'ta carried on worse, if the place had been on fire. A policeman had to go in an' ketch the monkey an' quiet him down!" "What a jolly place New Orleans is," thinks Charley, as he whoops with laughter, "where the police reassure the harlots! It's a real Catholic city!" "That bottle," proclaims the artist to the student, "is the most beautiful thing of its kind I have ever seen: it has significant form. I bought a pair of Empire vases at an auction today and I give you my word of honor, as an ornament, I would rather have that bottle!" "Make you a present of it," says the bar-tender, who has overheard him across the room. "That's real ol' French brandy." He comes forward, proffering the bottle with the expansive and casual air of a rich plantation-owner.

"Can you remember the Barrel-House Blues?" "Yeah; I cain' remember dat one," says the Negro, drooping heavily over his guitar. "Lemme have another drink an' I'll try and sing it." "Bring him another drink," orders Charley, and adds to the company at large, "I can sing Sweet Adeline!" "We'll take your word for it," says the artist. "Go ahead and sing it then," says the student. "The tenor is all I can sing: I've got to have another voice." "I kin sing the bass," says the detective. "Go ahead and play the accompaniment," commands Charley, beaming. "Do you know Sweet Adeline?" "Yass: I know dat one," says the Negro. They go through it, in imperfect synchronization and with a great gulf between tenor and bass. "That's not Sweet Adeline," says Charley, with intense professionalism. "That's the same accompaniment you were playing before!" "I couldn't jes' remember it at first. Start again an' I'll play it right." He puts down his hat and they fling coins with the gestures of princes. "I can sing a baritone," says the student, who, in his mind, has been trying his own voice with enthusiastic approval. "Well, hadn't we ought to make it a quartette then?" the bar-tender urges. "I used to sing that song once." The guitarist, struggling against torpor, pulls himself together in his chair and strikes a few inappropriate chords. Then the quartette bursts on the room:

Just before the weekly luncheon of the Kittiwake Club, the Reverend Kendricks comes over to the President and speaks to him earnestly: "We've got to throw some more pep into these lunches," declares the fighting pastor. "There hasn't been a spark of life in them lately! Half the members act like they were strangers to each other; they sit around like they were in a restaurant. If we don't want to be considered just a charitable home for left-overs from the Rotary, we've got to take a brace!" His black eyes, his sharp nose and his jaw of snapping white teeth bite fiercely into the President, whose round spectacles and egg-shaped head seem to melt and disintegrate before the pastor's attack: Mr. Evans is the proprietor of the third largest clothing store in New Orleans. "Another thing," the Reverend Kendricks continues. "You mustn't let Peterson talk about the trip to Mississippi. He's peeved with the way they were treated—whether rightly or wrongly, I don't know. But, in any event, he's all primed to make himself nasty about it—and, if the Kittiwake stands for brotherhood, any reflections on brother Kittiwakes are contrary to the Kittiwake spirit!" "I've asked him to speak already," says the President helplessly. "Well, just leave him out," says the pastor.

The tables are nearly filled; the waiters serve the soup. Mr. Evans sits down before the American flag spread on the wall behind him. He swallows a few spoonfuls of soup, then immediately rises: "Now, to see who wins the attendance competition, will those with red badges please rise." When the reds have risen, the whites rise, interrupting their gumbo soup. While the soup-plates are being removed, the Reverend Kendricks springs to his feet: "Now, we'll sing Number Seven in the song-book and I want you to put some pep into it!" The Brothers sing Auld Lang Syne as fast and as hard as they can: when they have finished, their minced chicken is before them and even a little cold. Mr. Evans rises again: "Mr. Zeismann will now address us," he begins. "Fine the President!" cries a voice with a sharp laugh; "Yes: that'll be a dime!" "I mean to say. Brother Zeismann will now address us on business methods in the shrimp-packing industry." Brother Zeismann, who takes the occasion seriously, reads aloud in an inaudible voice a paper which he has carefully prepared. Some of the younger members become restive and grumble among themselves: the paper so far overruns the minced chicken that, by the time Brother Zeismann has finished, the Reverend Kendricks has only time for two stanzas of a comic song.

Brother Evans begins in some embarrassment: "I have asked Mr.—Brother Peterson to talk on his trip to Gulfport last week." "I want to move," snaps the Rerend Kendricks, "that no public report be made: it has no place at a Kittiwake luncheon. Let Brother Peterson make a report to the officers, if it is desired, at some other time." "I move that a report be made here!" says a Brother who has been on the trip and who does not like the Reverend Kendricks. Somebody else seconds the motion; a vote is taken and the ayes have it. "Some of the Brothers were surprised," says Brother Peterson, after a few preliminary remarks, standing at ease with his hands in his pockets, "at what happened to us up there. But I wasn’t surprised: I'd been to Mississippi before. In the first place they put us up in a little hotel that stood right beside jail-house: we wouldn'ta minded that so much if the rooms had only been clean: I expect the prisoners were better off than we were. Then, at the meeting, they didn't introduce us and they didn't say nothing to us: a Mississippi proposition was handled from soup to nuts! We little table to ourselves and it was 'way off on one and, after the dinner, we just filed out—like a team! As I say, some of the Brothers were surprised; I'd been up to Gulfport before and the last time I went I got shot. I've got the bullet-hole in my arm now! I knew what to expect and we got what I expected. In other words, the whole thing can be summed up in a single word and that word is Rotten!" The Reverend Kendricks checks the laughter by leaping into another song. "Now, we'll sing a new song," he shouts. "The new Kittiwake song—written by Brother Benziger!" He drives them through it with spiteful force. At last they subside to eat chocolate pie with a lump of meringue on top. But the Reverend Kendricks has seen his chance: "What about these pie-eaters here?" he cries. "Couldn't wait to get at their pie! How 'bout a little duet from these pie-eaters?" The two Brothers who have begun on their pie before the Kittiwake song was finished smile foolishly: one is the man who seconded the motion. "It's not a joke—not a bit of it!" insists the Reverend Kendricks grimly. "Come on, you 'Buzz'!" He leans over and glares at the celluloid buttons which indicate their nicknames, "And you, 'Doc'! Let's hear how you can sing! Come on: stand up and sing!" At his command, the two men stand up; he herds them to the middle of the room; they turn red. "Come on," cries the Reverend Kendricks, "let's hear you sing it through!" He leads them triumphantly:

We're proud to say it now! We'd say it, anyhow!