You are using an outdated browser.
Please upgrade your browser
and improve your visit to our site.
Skip Navigation
Can Aristide come home now? 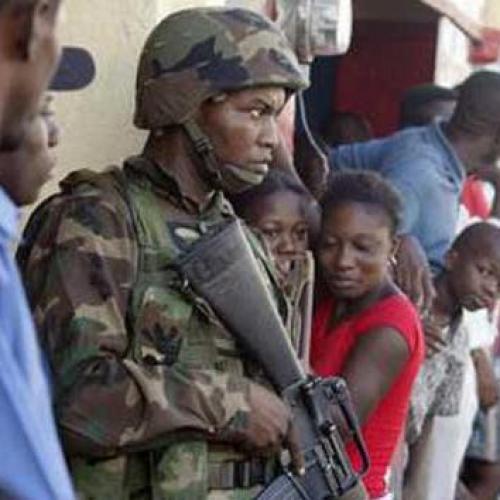 Under Bill Clinton as well as George Bush, U.S. policy in Haiti has threatened without delivering. The Haitian generals, masters of bluff and bravado themselves, see this for what it is. Their interpretation: the United States says it wants to reinstate democratic rule, but it doesn't--not really. In the past few weeks, however, the intransigence of the Haitian military has been so embarrassing to the United States that the administration has been forced to make good on a few of its threats.

Two weeks ago, responding to the Haitian generals' retreat from the negotiating table, the United States finally revoked the visas and froze the assets of some of the leaders and backers of the 1991 coup against Jean Bertrand Aristide. Of course, since the Americans had threatened to do this for almost two years, there was not much left to freeze. The United States also agreed to support forthcoming U.N.-enforced petroleum and weapons sanctions against Haiti, after having closed its eyes to the leakiness of the oas-sponsored trade embargo that is theoretically still in effect. Clinton put Marc Bazin, prime minister of the de facto regime, on his assets list, sending a signal that Bazin is no longer the Americans' pet pol. Once he lost his U.S. support, Bazin also lost his military backing and was forced to resign. Now that Haiti has no de facto president or prime minister, the regime is openly military.

Old institutional ties within Haiti are a big reason it took the United States so long to get serious. Since its nineteen-year occupation of Haiti, which began in 1915, the United States has had close links to Haiti's light-skinned elite, whom the Marine occupiers found more appealing than the country's blacker, poorer citizens. The occupation government ran customs, where its agents and officers worked with the elite business families of the bord de mer, which supervised exports. The Marines installed a succession of mulatto puppet presidents and developed a mulatto officer corps for what became the modern Haitian army. The military relationship remains strong. Generals Henry Namphy and Prosper Avril, two of Haiti's post-Duvalier dictators, were trained in the United States, as were Raoul Cedras, chief of staff under Aristide and leader of the coup against him, and Michel Francois, perhaps the most brutal of the anti-Aristide officers running the country.

In other words, the generals who led the coup against Aristide, and their business backers, had good reason to expect the United States not to push them too hard for Aristide's return. They knew the U.S. Embassy and the U.S. Agency for International Development in Haiti harbored a deep antipathy to Aristide, whom the embassy had labeled "a radical firebrand" before he became a presidential candidate. Aristide was just the kind of leader--poor, country-bred, black--the Marines had fought in various anti-U.S. rebellions. He had no ties to the elite. He was out of the Port-au-Prince loop, and to be feared.

AID, on the other hand, was very much on the inside with Port-au-Prince society. The secretaries at the fancy AID office came from Haiti's best families. The embassy nurse, an American, was married to the scion of a wealthy elite clan, a man who participated in an abortive coup against Aristide even before the new president was inaugurated. Under the Aristide government, AID, which not surprisingly found itself in agreement with the elite's arguments against the new president's proposed labor improvements (such as raising the minimum wage to 50 cents an hour), allocated more than $26 million to programs supporting the "private sector," a nice name for Haiti's robber barons. Though Clinton's assets list is tough on the military, it almost completely omits the big families who financed the coup.

Things are bad in Haiti. Surprise. Since the coup, the Haitian government, which traditionally does next to nothing in terms of public service, has done actually nothing. Children are growing skinnier and skinnier, which in Haiti is hard to do. According to a study by the National Labor Committee (a coalition of twenty-three U.S. unions), the average Port-au-Prince worker--often employed in the factory of one of the ruling families that backed the coup--makes the equivalent of fourteen cents an hour to assemble toys, electronics and clothes for U.S. export. So much for the trade embargo. In the Port-au-Prince markets, a week's salary of $5.50 buys twelve plantains, four onions, four tomatoes, three cups of cornmeal, four bouillon cubes and a cup of sugar--not exactly enough for the five to seven people a Haitian worker usually supports.

The military, emboldened by Clinton's wavering, has attacked peasant groups in the countryside--despite the presence of some 150 foreign observers from the U.N. Mission Civile. Last month, when the generals stalled negotiations and Clinton did nothing, military violence erupted. In Hinche, where the post-coup military obliterated a peasant movement, the ten foreign observers who had been interviewing locals about repression found their offices suddenly empty. "Outside the mission's office, there is always an armed attache standing there, watching," said one human rights worker. "It's not a very comfortable atmosphere to do business in." The observers, whose presence was supposed to reduce repression, are now being treated as objects of scorn. Soldiers have taken to beating their victims in full view of mission members.

No one knows how the elite and the military will react to an oil and arms embargo. Since so many American threats have been empty, they will doubtless wait to see if the sanctions are real--and effective--before they bend to the pressure. But an oil embargo seems to be the one instrument of international policy that might actually work, especially if the neighboring Dominican Republic complies. (U.S. threats to revoke its special sugar-trading relationship with the Dominicans might do the trick.) If oil supplies dried up, the army would no longer be able to project itself into places like Hinche. The provinces would be virtually uncontrollable. An embargo would also chop away at the elite's comfortable life. No oil would eventually mean no delcos, the Creole word for the private generators the wealthy use to shield themselves from Haiti's frequent blackouts. It would also mean that businesses that use generators during power outages would have to shut down during those hours. It would stop the private minibuses that bring hundreds of maids and houseboys and gardeners up from the slums to work for the wealthy. Finally, the embargo would prevent the linen-shirted bachelors, the high-heeled mistresses, the sleek matrons in their designer jeans, the long-fingered bankers and all the beautiful rich teenagers from driving their Mercedes and Volvos and smoke-windowed Mitsubishi Monteros around the high hill above Port-au-Prince.An oil and arms embargo wouldn't necessarily compel the military and the elite to give in without further fighting. In fact, the prospect of a reinstated Aristide may prompt an attempt by the military to "clean up" the opposition before the exiled president comes back. If democracy is to return, they reason, let it return without roots. This is not to say we shouldn't support the embargo. If it works and the generals step down, a timetable will be set up to appoint a consensus prime minister, create a professional police force, reduce the size of the army and reorganize the judiciary. But first and foremost Aristide must be allowed to return. This is what Haitians are dying for, not necessarily because they love Aristide but because they understand what their first freely elected president represents: the chance not to starve, the chance to work and the possibility that their government might respect them, for once.

Amy Wilentz is the author of Farewell Fred Voodoo: A Letter From Haiti, The Rainy Season: Haiti Since Duvalier, Martyrs’ Crossing, and I Feel Earthquakes More Often Than They Happen: Coming to California in the Age of Schwarzenegger.