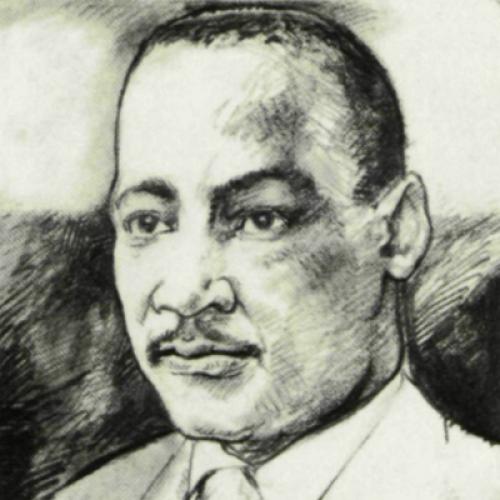 by Stephen B. Oates

When Robert Kennedy tried to get Dr. King to call off the freedom rides, he appealed to patriotism: "The President is going abroad, and this is embarrassing him." It is hard to remember how unthinkable criticism of America was as the 1960s began. William Buckley said the civil rights movement was de facto pro-Communist, since it gave aid and comfort to the enemy by admitting America was imperfect. People believed that adverting to segregation, not segregation itself, was our national embarrassment. King had to teach America to look at itself before he could begin to change things. Even some black leaders, at the outset, thought he was just causing them more trouble. The man who would seem too moderate, once he had challenged America's moral claims, seemed too radical when it was still un-American to talk of changing America.

It was not a job he asked for. Daddy King had not raised his son to be a radical. The elder King inherited the Ebenezer Baptist Church from his father-in-law. Dr. Adam Daniel Williams (the doctorate was honorary), and earned his own doctor's title at Morris Brown College in Atlanta. Martin Jr. would take the next step—a doctorate from a northern school--and make Ebenezer church even more respectable. Daddy gave him a new Chevrolet when he graduated from Crozer Seminary in Pennsylvania, and King left for Boston University and comparative freedom--from Daddy, from the South, from the local marriage and ministry that had been laid out for him. In graduate school. King became the scholarly ladies' man of a black circle in the Boston-Cambridge area, met Coretta Scott, a student at the New England Conservatory of Music, finished his dissertation (playing Paul Tillich off against Henry Nelson Wieman to reach a synthesis of the two), and hoped to become a professor.

But there were dues to pay. He felt he should spend some time in the South (so long as it was not in Daddy's church), and accepted a call from a church in Montgomery, where the real dues-collector came to him, bearing the unlikely name of Nixon. A tired woman had refused to move to the back of the bus. We do not know how many times that had occurred without anyone hearing of it; but E. D. Nixon, of the porter's union, put Fannie Lou Hamer and Martin King together, and King was forced down a path he had not chosen. He had acquired the right skills without realizing it--an ability to conceive events as moral drama and to convey that conception, along with an academic respect for nonviolent theologies. But he knew that these things were not enough. To employ them all, he would have to accept his own death.

He did not do it all at once; he hoped to slip away from the appointment he had made. But it was soon clear to him, as to others around him, that one could not challenge the entire moral basis of a society's racial arrangements without being jailed, beaten, and (finally) killed. Going to jail meant risking death from inmates as well as guards, and he went to jail nineteen times. By 1958 he was telling his wife,

If anybody had told me a couple of years ago, when I accepted the presidency of the Montgomery Improvement Association, that I would be in this position, I would have avoided it with all my strength. This is not the life I expected to lead. But gradually you take some responsibility, then a little more, until finally you are not in control anymore.

By 1962 a northern editor was instructing his reporter, "Go where the Mahatma goes, he might get killed." By 1968 the Federal Bureau of Investigation had followed up on fifty death threats. He was stabbed; his home was bombed; his church was bombed. His time was running out. Four people had publicly put prices on his head. His wife had recurring nightmares of his murder. An aide remembers that "the strain of wondering when it was coming was almost overpowering."

Those marked out for violence have a special right to anger, a right King had to forswear. His death would be meaningless if it were just another tradeoff of force for force. He moved among his potential assassins, frightened but not retaliating, waiting. Nor was the threat of white violence the only thing that drained him. Stephen Oates is admirably clear about the divisions behind the facade of black solidarity. Various factions and individuals were sniping at King, trying to use him, trying to supplant him. He had to bear all this, try to hold the fragile alliances together, month by month, handling other egos with a patience they did not reciprocate.

How can anyone do such a thing? King thought he did it because he had to--God demanded it of him. Once I denied, on William Buckley's television show, that there had been a religious decline in America, and gave King's career as proof. To which Buckley replied: "He's not in the category, at least in terms of his public performance, of the Christian leader; he's in the category of the civil rights leader, and that's different. And this may be one of the reasons why it becomes so easy to discredit religion, because nobody takes it seriously." Stephen Oates, luckily, gets things straight. He realizes that Dr. King is an important figure in American social and political history because he is an important figure in our religious history. King is one of the reasons some people take religion very seriously indeed. His was the most radical critique of America, since it was made sub specie aeternitatis. His nonviolent message is as relevant now as in the 1960s. His insistence on a moral assessment of our country's use of its power and wealth becomes more important, not less, as time passes.

Though Oates gives a thorough record record of King's activities, and gets his priorities right, the book is a bit crippled by normal liberal pieties. King was not a brilliant thinker, as Oates claims, it is significant that no effort has been made to publish his dissertation; and he always needed a great deal of help in writing his books, articles, and speeches. On the matter of infighting in the civil rights movement, Oates is clear on the main lines of conflict, but unspecific about personalities--perhaps for fear of legal problems. On the exaggerated accounts of King's sex life spread by the FBI, Oates makes the not very helpful admission that King was a "passionate" man and tried to avoid compromising situations after he learned of the surveillance. But the prophet is often not "saintly"; and the important matter about King is that he did not let "macho" sexuality affect his views on nonviolence, patience, and the acceptance of suffering. There is little analysis in Oates's chronicle. The estimate of King remains one of the principal tasks of those who would understand modern America. When Everett Dirksen tidied up the final passage of the civil rights bill, he called it an idea whose time had come. But it took a number of people who were willing to die to make that idea's time come; and King's challenge has not met with an adequate response even to this day. When President Reagan went to a black school in Illinois and was asked about making King's birthday a holiday, he said that other groups might want to have representatives honored if blacks got their way. Like Mr, Buckley, Reagan thinks King spoke just for "them," not for all of us--and that's a national embarrassment.

Garry Wills is Henry P. Luce Professor of American Culture at Northwestern University. His most recent book is The Kennedy Imprisonment (Little, Brown).