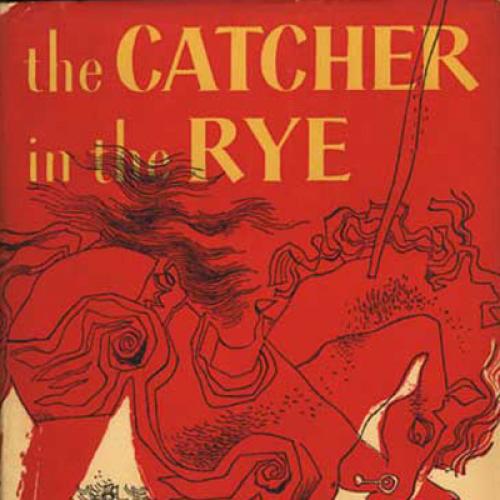 This article was originally published on July 16, 1951.

The Catcher in the Rye

In "A Perfect Day for Bananafish," the first of J. D. Salinger's remarkable short stories to attract widespread attention, a young veteran recovering from a nervous breakdown in Florida takes a little girl out swimming, in a charmingly described interlude, and then goes to his hotel room and shoots himself when he is confronted by his shallow wife. In "For Esmé— With Love and Squalor," one of the best and most moving of all his stories, an American soldier in Germany suffering from an extreme case of combat fatigue is brought back by a message from a little girl he had met in England. And in the climactic scene of his first novel, The Catcher in the Rye, the sixteen-year-old hero who has been wandering around New York alone for three days, ever since his expulsion from boarding school, in a state somewhere between reality and unreality, abandons his dream of running away to the West and goes home (and subsequently to a sanitarium) when his ten-year-old sister, whom he has met secretly, is clearly broken-hearted at the thought of his leaving.

In all three cases the children and the boy-men are exceedingly well done. In each case, despite the similarity of situation, they are quite different and distinct individuals. The final scene in The Catcher in the Rye is as good as anything that Salinger has written, which means very good indeed. So are a number of other episodes. But the book as a whole is disappointing, and not merely because it is a reworking of a theme that one begins to suspect must obsess the author. Holden Caulfield, the main character who tells his own story, is an extraordinary portrait, but there is too much of him. He describes himself early on and, with the sureness of a wire recording, he remains strictly in character throughout:

I shook my head. I shake my head quite a lot. "Boy!" I said. I also say "Boy!" quite a lot. Partly because I have a lousy vocabulary and partly because I act quite young for my age sometimes. I was sixteen then, and I'm seventeen now, and sometimes I act like I'm about thirteen. It's really ironical because I'm six foot two and I have gray hair. I really do. The one side of my head—the right side is full of millions of gray hairs. I've had them ever since I was a kid. And yet I still act sometimes like I was only about twelve.

In the course of 277 pages the reader wearies of this kind of explicitness, repetition and adolescence, exactly as one would weary of Holden himself. And this reader at least suffered from an irritated feeling that Holden was not quite so sensitive and perceptive as he, and his creator, thought he was. In any case he is so completely self-centered that the other characters who wander through the book —with the notable exception of his sister Phoebe—have nothing like his authenticity. The Catcher in the Rye is a brilliant tour-de-force, but in a writer of Salinger's undeniable talent one expects something more.