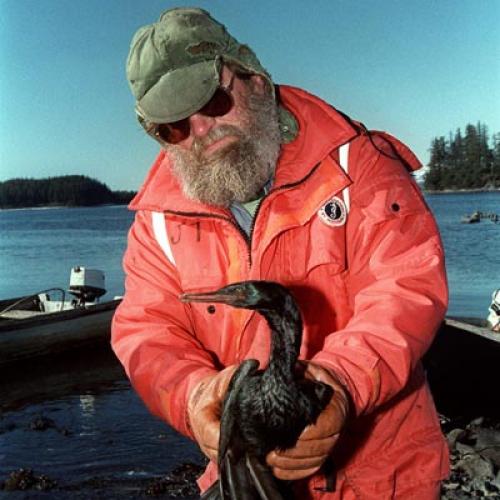 One in 28,000 would be a pretty good failure rate for a condom manufacturer. It’d be a spectacular for a method to prevent prisoner recidivism. But in fields like nuclear deterrence and ecological disaster prevention, one little mistake can spoil the whole darn program.

What is happening in Prince William Sound is a horrible catastrophe. The place looks even worse than Boston Harbor did in those Bush for President TV commercials.

Tens of thousands of oil soaked birds and animals are dead or dying, but that’s only the beginning. For example, most of Prince William’s bald eagles, which is to say most of America’s, will probably die because their oil-coated intestines can’t absorb nutrition–a pathetic fate for a patriotic symbol even nobler than compulsory flag-pledging.

The cold has congealed the oil slick into a gummy mat that traps the lighter compounds, such a benzene, which normally would evaporate, under the surface. They are now dissolving into the water, they are to be ingested by zooplankton, the tiny animals that are the basis of aquatic food chain. The poisoned plankton will carry death and disease all the way up the line.

Much of the shoreline will be rendered essentially lifeless. Prince William Sound is full of islands, coves and inlets as ideal for trapping oil as they are breeding fish. Some 800 miles of shore are already ankle-deep in a black-brown gunk that’s much less appetizing than its name: “mousse.” Ultimately, the length of ruined coastline will be as great as Long Island and Cape Cod combined–with Martha’s Vineyard, Nantucket, and Kennebunkport Tossed in for good measure.

So who ought to get the blame?

Start with Exxon, which made $5.3 billion in profits last year. Its chairman, Lawrence Rawl, is the kind of hard driving dynamo who makes Wall Street hearts go pitter-pat. When Rawl moved into the big CEO’s office, he got rid of his predecessor’s shelves of books and replaced them with duck decoys. (These will presumably now have to be painted black fo greater realism.) He also got rid of 80,000 of the company’s 182,000 employees, including all–not some, all–of its oil spill specialists.

Then we have the good people of Alaska, who have consistently voted for pro-development candidates. Alaskans talk a lot about being self-reliant frontiersmen, but they’ve been on the take for years. When the oil money started rolling in, they abolished their income and sales taxes and set up a fund now fattened to $10 billion from oil royalties, which sends a yearly check to every citizen of the state. No wonder, they were so eager to believe the oil giants’ assurance that nothing bad would ever happen.

But the biggest villains of all are the Republican politicians who, with occasional help from a few ersatz Democrats, created the conditions for this calamity.

The whole Valdez pipeline-tanker project was conceived in sin. In 1973 a titanic congressional battle climaxed in a 49-49 vote in the Senate. Vice President Spiro T. Agnew broke the tie in favor of Valdez and against the environmentalists’ alternative, which was not to prevent the extraction of Alaska’s oil but simply to send it via pipeline across Canada, thus eliminating danger of tanker spills–a danger the oil lobbyists and their Republican friends scoffed at.

The scoffing continued for 16 years. As recently as three days before the disaster, Senator Frank Murkowski, Alaska Republican and oil lobby shill, defending the Bush administration’s plan to drill for oil in the Arctic National Wildlife Refuge, wrote in USA Today: “Alarmists say Alaska’s environment would be destroyed if the refuge is explored. Twenty years ago, they sounded the same alarm against the Alaska pipeline–and they were proved wrong.”

Under Ronald Reagan, the budget cuts needed to finance a tax holiday for the rich meant, to take one small example, that the coast guard had to curtail its activities in Prince William Sound. The Guard’s old radar system would have spotted the tanker heading for the reed; the new one didn’t have enough range. More broadly, the Reagan administration’s contribution to the debacle consisted of eight years of disdain for environmentalism, hatred of “government,” and worship of “the market.” Fuel economy standards were relaxed. Conservation and alternative energy programs were eliminated. Any notion of taxing gasoline more steeply than the current 29 cents a gallon (as against $1.61 in Japan, $2.44 in France, and $3.31 in Italy) was ruled out. Oil imports, unsurprisingly, climbed all the way back to 1973 levels.

And President Bush, who had ridiculed environmentalism during the campaign by repeatedly making an idiotic joke about caribou rubbing up against the Alaska pipeline? For three days after the spill, nothing. On the fourth day, he went to the White House press room and was asked if he had changed his views on the Arctic Refuge. He said, “NO. I see no connection.” On the seventh day, he told an audience of journalists, “I think most people are reasonable enough and fair enough to look back at the record over the years in terms of the pipeline and found there had been very little damage, if any. Certainly there’s been no lasting environmental damage.” Then he unveiled this corker, “So what you do is the best you can, express the genuine concern that you feel on the environment–and I do feel a concern but not take irresponsible action to guard against an incident of this nature.”

Really, this is beneath contempt. At no point has Bush recognized, let alone expressed, the public’s indignation and grief about what has happened. At no point has he shown the slightest awareness that there is a common good at stake and that he has a duty to pursue it. And of course he has done nothing at all. Exxon, whose primary responsibility is to its stockholders, remains in charge of the cleanup.

Bush has had the nerve to compare himself, as an environmentalists, to Theodore Roosevelt. From Bull Moose to Bush Mousse: a sad decline.