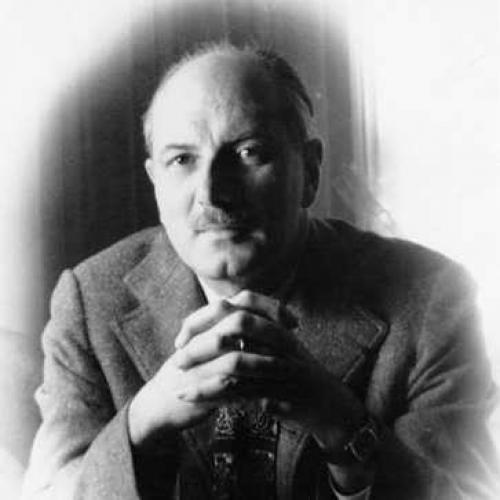 The exhibition of modern French decorative art at Lord and Taylor’s has breadth, sweep, élan. The space has been generously disposed: the furniture and textiles are arranged in rooms and alcoves: and the large room that contains the glass, silverware, stoneware, sculpture, is in itself a contribution to what a modern room in a museum might be It is a very good show indeed, for it gives a sense of the unity and interdependence of all the arts: but one can scarcely see the spectacle because of the spectators. They have come in thousands to this exhibit. They come: they look: they handle: they purr: they admire: they are shocked: they are delighted. One notes the women putting themselves in the midst of these rooms and wondering if they could live in them. They have become accustomed to a modern note in shops and smart restaurants; their men have accepted, with confused tolerance, the same sort of thing in their office building. But now these new designs threaten the home. The ladies pause!

Lord and Taylor have done an excellent job in putting such a comprehensive show before the public; but I confess I have more respect for the people who will look at this exhibition and pause than for those who will not quite understand it, or like it, but will think it their duty to swallow it whole. For the great danger is that we will swallow French modernism this season as we have succumbed to Spanish Renaissance, or Tudor English in the past; and the total effect on American taste and form will be just as mischievous. It needs no deep prophetic vision to see the furniture manufacturers turning out copies of modem designs for the next June market at Grand Rapids as they would turn out reproductions of any other period. I foresee this and shudder. Let us see if a little understanding and appreciation of these French products will sidetrack that catastrophe. All this French work on exhibition has a unity: sometimes it is acutely modern, as in the excellent lighting fixtures, and sometimes it is not modern at all, but it is always French. Consider these products as a whole. They are based on two main elements. One is patient, studious craftsmanship which never entirely left the French workshops, no matter how trivial and stupid might be the designs that they carried out: this craftsmanship has risen to new opportunities in the manufacture of glass, for instance; and the patience and care of the hand-worker have remained even in products that fully utilize the machine. In part, these new decorative forms rest upon an understanding of the nature and technical limitations of silk, wool, wood, iron, glass. But technical artifice is not the only element: the other is the artist’s response to the French, or rather, the Parisian environment, expressed organically in a preference for certain tones and colors. Except for one of the rooms done by an American designer, one notes pervasively the wan colors of Paris, grays, yellow-greens, pinks, browns, silvers; the decoration echoes the tone and mood of the best contemporary French artists—Picasso, Derain, Leger, Bracque, Vlaminck.

For a Parisian, there would be much to say for these color schemes: they would harmonize, perhaps, with some internal mood or attitude: at very least, he might enjoy them as he would enjoy the pale glint of the winter sun against the murky gray houses of the Seine, or the street lights against a foggy twilight on the boulevards, or the warmer, murkier colors of Notre Dame itself. Pictures and decorative background and the city itself have a unity: that unity is French experience itself: and this is what gives such a positive quality to modem French decorative art. Good: but the very qualities that must make this art warm to a Parisian make it cold, foreign, remote to a New Yorker. The more deeply one appreciates this French work, the more cheerfully one must leave it in the country of its origin. Our handicraft is insufficient, and in technical design we must rely much more heavily upon automatic or semi-automatic machinery: our background is different: our sense and feeling are different: and as these things work out in positive decorative forms, American art can no more be “modem French” than it can be Louis XVI. I will not argue with anyone who thinks that it can be Louis XVI; for those who think so—I say it brashly—understand neither France nor America nor the court of Louis XVI nor the functions of decoration.

The real problem before our designers today is how to achieve the common ground and the common understanding among American workmen that exists among the French. Despite the fact that the Lord and Taylor show impartially includes both the pseudo-modernists, whose feeling is still essentially rococo, and the genuine moderns, designers like Jourdain and Lurcat, the great triumph of this show is that it demonstrates that unity is possible, and that in France contemporary art is alive and active in every department. At present, we have a very shallow conception of both the modern and the American: too many of our designers think that a design based on cubes and triangles is necessarily modem, and if our textile manufacturers produce goods which use as a decorative motif the Niagara Falls or a succession of Indian tepees, they fancy, with amusing confidence, that they have created something genuinely American. This sort of understanding will not get us very far, we must go a little deeper than that; and this French show distinctly points out the way.

The problem of form can, I think, be left to itself, provided that our designers always work with an eye to the essential function of the product; this method has produced admirable results with our bathroom fixtures and our kitchen equipment, and, I think, it would do equally well with our furniture and accessory decorations, provided the designers kept it rigorously in mind. A dignified society will demand chairs of different shape from one that sinks easily into comfortable postures, and machine production will impose certain limitations or make certain concessions that would not arise in a purely handicraft technique: but once a rational basis of design is recognized, a steady improvement in form will take place.

The problem of “feeling” is quite a different one, and much more difficult; for this implies establishing a happy and harmonious relationship between the object and the person who uses it or beholds it. If I am not mistaken, color and pattern are the two chief ingredients of feeling —although form, too, undoubtedly plays a part. Feeling is associated, not with the production of an object, but with a common experience of life; it may alter without any essential changes of technique, as the flowery baroque altered into the severe rhetoric of Empire architecture, as the warm, sensuous, moist quality of Boucher altered into the rigorous line and the dry colors of David.

Modern decorative art is a synthesis of two things: new forms produced by mechanical methods of production or suggested by other mechanical objects, and new feelings. On the side of form, a certain severity and rigor is essential to modern art: but this does not hold true of feeling, for the organic opposition, which leads the office worker to spend his evenings in the abandonments of jazz, may also have its counterpart in decoration. On the formal side, then, we can learn lessons from the French artists: but we must discover our own feelings, our own appropriate colors and patterns in our own way. How? Our American artists will teach us, if our designers are chosen from their ranks, and given the opportunity that Lurcat and Leger have had in the design of textiles in France, or if the American designer’s appreciation of art gets beyond the stage of John Alexander and Bruce Crane. Hardly any of our good American artists works with a palette as dull and low as the French moderns. Whereas in France Matisse’s rich, jewel-like color is in the present generation something of an exception, among the Americans, Marin, Sheeler, Prendergast, O’Keefe, Maurer, Pach, Hartman, the color is usually high and intense. This, I think, represents the dominant American feeling, although it fluctuates from generation to generation, and doubtless changes somewhat from place to place. One finds these keen colors in the early hooked rugs and patchwork quilts: one finds them in our original architecture, from Louis Sullivan’s Golden Portal at the World’s Fair to Mr. Ely Kahn’s new Park Avenue Building. There are many sources for this feeling; but one need perhaps go no further than our brilliant sunlight, our clear air, the sharp forms of mountain and building, and the equally sharp shadows that they cast. These qualities, to say nothing of our buoyant, energetic temperament, should give our decorations a certain hard, bright, joy—as contrasted with the calm, slightly sad middle tones of contemporary French decoration.

Will our manufacturers learn this lesson? Will they understand this French craftsmanship and this French feeling so well that they will produce something wholly harmonious with our own needs? Lord and Taylor has promised an American exhibition next year if the public responds and if our manufacturers catch up with the need. There is no doubt about the public’s response: they have risen eagerly to the bait, and they display, I think, a willingness to be led. For at least a decade the American artist has been knocking at the manufacturer’s door; and, to speak frankly, the manufacturer has been asleep: he would not believe that modern designs were tolerable when the American artist and the American architect showed them to him: instead, he shrugged his shoulders and listened for the latest fashion hints on a new “period.” Will he recognize the native product at last? Will he encourage it further? Will be acknowledge his blindness and stupidity with a generous gesture? Will he undertake a general house-cleaning in his dusty show-rooms, or will he just add modernism to his catalogue of periods? One pauses: yes, precisely: one pauses for a reply.