You are using an outdated browser.
Please upgrade your browser
and improve your visit to our site.
Skip Navigation
The prospects of the Second Dawes Year. 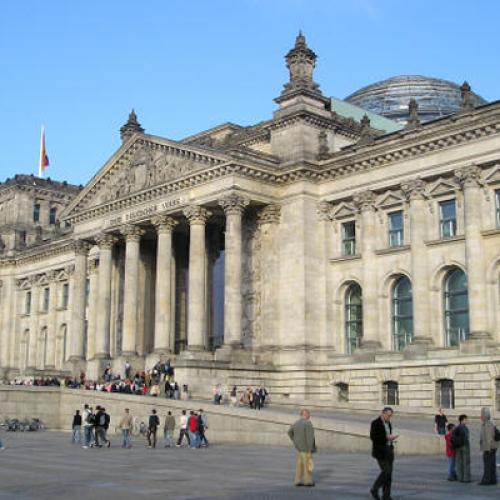 The Agent-General, the Commissioners, the Controllers, all the Jack-Daws set up to keep a close eye on Germany, have issued their first Reports. They are clear and sensible documents, full of justice and common sense, and do credit to the corps of international civil servants, who—as one of the few good fruits of the Treaty of Versailles—are now, under the aegis of the Reparations Commission and the League of Nations, playing so big a part in the life of Europe.

The first Dawes year has been, it seems, plain sailing. The machinery has been introduced smoothly, with abundant good faith on both sides. The experts’ forecasts of the yields from taxation and from the railways have proved conservative, and there are comfortable surpluses. The Dawes loan has duly greased the wheels. Deliveries in kind and collections under the reparations recovery act have so nearly covered the Annuity that it has not been necessary for the transfer committee to purchase foreign exchange except for the service of the loan. The fiscal benefits, which accrue to a country practically cleared of internal debt, state, local, and municipal alike, and owning its railway system free of encumbrances, a country moreover, which practices disarmament and has no entanglements, expenses or responsibilities abroad, are becoming evident in practice. Mr. Parker Gilbert points out that at the date of stabilization the entire national debt of the Reich in paper marks had a gold value of less than £50. Apart from reparations, Germany is a Finance Minister’s paradise. She is a standing proof that a country can live through a capital levy far more unjust and far more drastic than Socialists have yet proposed, and survive to enjoy the benefits. No national debt, no private mortgages, no navy, no Mesopotamia. Truly the fruits of defeat are very tempting! But all the same a spectre looms up. She is not through with reparations—she has not even begun.

In spite of the excellent results which the commissioners and controllers relate, one feels in their reports a note of gravity and of uneasiness. They well know that their real troubles are ahead and not behind. I think that I can put the essence of the problem in a few words.

Last year the reparation annuity cost Germany about £47,000,000, out of which the Dawes loan furnished £40,000,000. Apart from this, Germany borrowed abroad some £33,000,000 by long-term external loans, and a large additional sum in the form of short-term credits. The Reichs-Credit A.G. has recently estimated the adverse balance for 1925, including the reparation annuity, at £200,000,000, met partly by loans and partly by German citizens bringing their capital back home. This figure is surely too high. But it would seem that, apart from the reparation annuity, Germany has a deficit of at least £50,000,000 per annum on foreign trade account. The published totals for exports and imports confirm this conclusion, even if we suppose that the former are 10 percent below and the latter 10 percent above the true figure. Moreover, the volume of foreign loans and the trade figures since October indicate that more or less the same state of affairs still continues. The problem of the transfer committee during the next three years is to convert this deficit of £50,000,000 into a surplus of £100,000,000.

How to do it? The orthodox prescription is to keep prices down by curtailing credit. No adequate export surplus will ever develop unless the price-level is kept down—all experts agree on that. Accordingly the Agent-General watches the credit policy of the Reichsbank with a keen eye. So far the Reichsbank has cooperated loyally. It has been maintaining a high and effective bank rate, rations credit, and keeps the volume of currency much below the country's needs at the present price-level.

What should we expect a priori from a credit policy on these lines? So long as the price-level is rising, even a very high rate of interest, up to 15 percent, is no burden on industry. If prices are rising at the rate of even 5 percent per annum, we can have boom conditions in industry in spite of a 10 percent rate for business loans. But so soon as prices cease to rise, and, worse still, if they begin to fall, a 10 percent rate becomes a crushing burden. This, I think, is the clue to the history of German business in the past year.

In September, 1924, when the Dawes scheme began, the mean between the wholesale index number and the cost-of-living index stood at 124. By December, 1924, this had risen to 131, by March, 1925, to 135, and by July, 1925, to 138 1/2. So far the burdens of dear money had been fully compensated, so far as business was concerned, by the rising price-level. Meanwhile, the volume of currency, largely as a result of the import of gold out of the proceeds of the Dawes loan, was increasing much faster than prices—the total German circulation rising by steady increments until in July, 1925. It was 30 percent greater than in September, 1924, as compared with a rise in prices of (say) 8 percent during the same period. To such a tune, naturally and inevitably, business and employment stepped briskly. Between the same dates real wages rose nearly 10 percent, the percentage of workers unemployed fell from 12.4 percent to 3.5 percent, and the percentage on short time from 27.5 percent to 5.2 percent; whilst the tonnage of traffic handled on the railways increased by nearly 50 percent. By July, 1925, railway traffics were 99 percent of prewar, and two months later real wages also were 99 percent of pre-war. Germany’s economic recovery seemed almost complete.

But though God sent a gourd to shelter Jonah in his afflictions, God also sent a worm. And in the latter half of 1925 the worm of Deflation gnawed his way through. The Reichsbank’s policy of credit restriction gradually became fully effective. The price-level ceased to rise, so that there was no longer any compensation for the 11 percent rate charged by the Reichsbank for loans. The volume of the currency was held in check at a figure which was hardly more than two-thirds of the pre-war requirements, after allowing for loss of territory on the one hand and for the rise of prices on the other. In fact, in the autumn of 1925, Germany was trying to carry on a volume of production with a volume of banking credit and monetary resources very inadequate to the existing price-level. Provided the Reichsbank stood firm at the sources of credit, it was certain that either the volume of production must give way, or else the level of prices. As is apt to happen on these occasions, it was the volume of production which yielded. The usual symptoms began to make their appearance—bankruptcies greatly increased, the prices of industrial shares fell (during 1925 the Frankfurter Zeitung index fell 42 percent), and the percentage of workers unemployed and on short time steadily increased. The numbers in receipt of unemployed relief rolled up rather slowly at first, increasing from 195,000 on July 1, 1925, to 364,000 on November 1. But thereafter the rate was so rapidly accelerated that by December 15 the unemployed numbered 1,057,031, and by the end of the year the total had reached 1,486,000. Governor Schacht has topped his million unemployed in Germany by the remorseless working of the same beautiful and reliable technique by which Governor Norman had previously achieved a comparable figure in England.

Now to put 10 percent of the working population of Germany on to the relief fund does not help reparations. But the transfer committee is faced with a difficult dilemma. If they acquiesce in the Reichshank’s relaxing its hold on credit and allowing the German price-level to follow its tendency to approximate to the world-level, they will have to abandon hope of developing an adequate export surplus in the near future.

It has always been evident to me that the problem of reparations must become, as soon as we got to real business—which is now for the first time—a problem of the real wages of the German workers. The German worker has very nearly recovered his pre-war real wages. If we take Germany’s losses of capital and of markets into account, it seems unlikely that this fortunate state of affairs can be compatible with the development of an export surplus adequate to meet the full reparation annuity. The work of the transfer committee must become, more and more obviously as time goes on, a struggle to reduce the German workers’ standard of life. The first stage of the Dawes plan has been to give Germany a much-needed breathing space, and to replenish her resources with foreign loans. This stage has naturally benefited the workers. The serious unemployment now prevalent is, as I read it, the first episode of the second stage—it is the result of an attempt to reduce prices and wages by the method of credit restriction. It is conceivable that this method may be partly successful in bringing down wages. But the transfer committee needs a combination of good trade and low wages in order to effect its objects, and I doubt if the method of credit restriction can bring off the double event. Perhaps the Committee will be compelled to attack wages, which is their real objective, in some more direct way.

"Sound" finance has Germany by the throat, just as it has England. I expect that it will not be shaken off except by a political storm. Big business in Germany is very ready to work loyally with the Dawes Commissioners, partly for love of a quiet life, partly in order to preserve good relations with foreign financial interests. But a situation may not unlikely arise in which no German government which obeys the behests of the transfer committee can retain the votes of the electorate. If that happens, what threats will the Allies offer to overawe the German public? A campaign by the Western powers for the explicit purpose of forcing down the standard of life in Central Europe will not be a bull point for the capitalist cause, and may give to the forces of unrest further East the opportunity for which they wait.

The mild and peaceful reports of the first year’s doings do not correct my instinct that I profoundly dislike the whole business. We must hope that those in charge will continue to pursue quiet and sensible courses, will hesitate to push anything to its logical conclusion, will ease out the credit situation as much as they can, and will be content for some time yet with moderate results. At present Germany is the economic danger-spot in Europe.