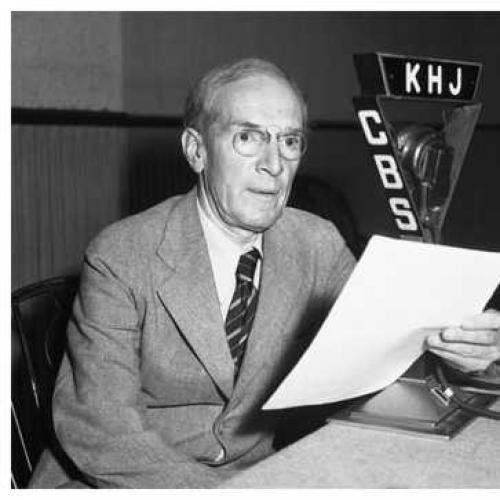 We publish below a continuation of the letters from well known Americans who have in general taken a progressive political position, stating for whom they will vote.

Among this week’s contributors, Upton Sinclair is the novelist and publicist; Allen Tate, poet and critic, is associated with the Southern Agrarian movement; Mr. Taylor is on the faculty of Columbia University and Goodwin Watson, that of Teachers’ College. Miss Van Kleeck is with the Russell Sage Foundation, and Rabbi Wise is at the Free Synagogue, New York City.

In response to our inquiry, Upton Sinclair sent us a copy of a statement he had written for The Epic News, which reads in part as follows:

Mr. Hugh Murray of Toledo, Oregon, has heard that I am going to vote for Roosevelt, and he wants to know “Is not a vote for him an endorsement of his plan to put us into a deeper, more hopeless bondage?”

I do not think that is quite his plan, Mr. Murray. It might be the ultimate effect of what he is doing, but I don’t think he intends that. He is in a rather difficult position, because the profit system is breaking down about his ears, but the people do not know it, and don’t realize it, and wouldn’t let him change the system if he wanted to. They insist upon having efforts made to preserve the system, and if Roosevelt did not make such efforts they would turn him out and put somebody in who would.

I have good reason to believe that President Roosevelt knows that there is something serious the matter with our economic affairs, and that he or somebody else is going to

have to do something quite drastic about it in the long run; but if you are going to be a political leader, you cannot go too far ahead of your followers. If you do, you will get cut off from them and retired to private life—like the present writer.

If I had the right to say who should be the next President of the United States, and if I were sure the people would support my choice, I think I would be radical enough to suit Mr. Murray. But I have not got that say and the people would not support me. The fact confronting us is that we have to choose between Roosevelt and Landon.

What can happen under Landon is that we may never have another presidential election in the United States. I do not say that Landon intends that; I have no doubt but that he would be horrified by the suggestion; and yet it may very easily happen in the working out of the economic forces now rushing this country to a collapse.

Mr. Landon says he is going to balance the budget; and at the same time he is taking the campaign funds and the support of Hearst and the American Liberty League. That very certainly means that he is pledged not to increase the taxes of the rich, so the only way he can balance the budget is to cut down relief to the poor and put some kind of sales tax on the masses of the people. If he does that, he certainly will have mass uprisings of the unemployed and mass strikes in the big industries such as steel and coal. He will certainly have to put down by machine guns and gas bombs these attempts at uprisings by the enraged people, and the outcome of that can only be the overthrow of our institutions and the setting up of a dictatorship by his big business men.

William Randolph Hearst, Mr. Landon’s first and most powerful backer, is now visiting Mussolini and Hitler and learning the formulas under which this change can be brought about. Of course it will be called Americanism and patriotism, and will be done in the name of God and country—just as it was done in Italy and Germany. . . .

I have made plain my lack of approval of most of the policies of the New Deal. I think that many of them are makeshifts and that many of them are blunders. But I realize that President Roosevelt has had a very difficult task—that of turning the Democratic Party from the party of Southern landlords and Northern corruptionists into a party of progress and social justice. I cannot expect him to do it in four years, and since I have to choose between him and Landon, I prefer to give him another four years. At the same time I shall go right on criticizing him and pointing out constructive measures to him, as I have done my best to point out to the people of California how, by electing congressmen pledged to production-for-use, they can continue to put pressure on the administration and do their part in changing the program of the New Deal.

I shall vote for Roosevelt. I am not ready to vote for anyof the radical parties simply because I don’t believe that American democracy is quite done for; if it has any chance to survive, it will be in the next four years under Roosevelt. There are very few of the President’s policies that I like, but he has been aware that a crisis exists, and there is at least a strong probability that he will take firmer and more coherent ground, in his second administration, against privilege and Big Business. Should Landon be elected he would certainly bring on a revolution of violence in his effort to restore the good old days of finance-capitalism. If I were a Communist, I think I should vote for Landon.

I intend to vote for President Roosevelt, because his program represents to me a fumbling attempt at changes along lines which I believe to be economically and politically necessary.

I am supporting the American Labor Party and its candidate, President Roosevelt. I do so despite the fact that compromises with reactionary forces have been all too evident during the Democratic administration. But as I see it, these same forces are now massed behind the Republican Party. It is important to defeat the Republican Party, and fortunately we in New York State have the opportunity not merely to go to the other old party but to join forces with the trade unions, which are determined now to develop political strength. Lack of political strength on the part of labor was responsible for many of the compromises of the recent past.

I am aware that some intellectual and professional workers in\ New York are criticizing the American Labor Party because it lacks an explicit and far-reaching program. In reply to this, my position is that the significant point is the organization of forces facing in the direction, broadly, in which the labor movement always faces, and that this organization of forces can be counted upon to defend democratic liberties. This defense is the real issue of the present, because unless that victory be won, all the other issues will be settled by the reactionaries.

Between the two major parties I see little to choose. I would prefer Landon because a fair enemy in an open field is preferable to the confusion created by New Deal maneuvers with leftward speeches and reactionary concessions. The failure of a big-business regime will be more apparent to our people if the alibi that the New Deal slows down recovery is removed. Give them rope! Some of my friends fear that a Landon regime, under Hearst influence, would be much more repressive. I doubt this. Pronouncements, at least on the matter of loyalty oaths for teachers, would point the other way.

This, I hope, is the last year in which persons interested in basic social change will have to choose between Socialist and Communist candidates. The development of a great farmer-labor-professional movement on the political front should make good headway now. Some kind of a People’s Front is coming, I think. Meanwhile, Thomas or Browder?

The answer depends upon how an increased Socialist or Communist vote will affect public opinion. Would a substantial increase in Communist votes lead to panic and repressive action which liberals could not withstand? Or would it lead to more study by many of what these Communists are saying about our American economy? On the whole, I think the mood of panic is passing, for the time being, and that any who would be influenced by minority party votes might be more stimulated to critical thought by an increase in the support for Browder.

Our letter to Rabbi Stephen Wise arrived while he was abroad. From his secretary we received the text of a public address delivered by him on May 17, indicating some of the reasons for the intention, which he has since publicly confirmed, of voting for President Roosevelt. We quote in part:

Let it not be thought that the results of the awful years associated with the name of President Roosevelt’s predecessor, though immediately the consequence of the Coolidge administration, were entirely averted or completely healed the moment President Roosevelt came to office. Even to this day the consequences are still being borne, despite the courage of the nation’s leadership and the incredible patience of millions of almost too long enduring Americans. . . . American democracy withstood its ultimate test, and, thanks to the vision . . . of President Roosevelt . . . the democratic way of life was reborn. However imperfectly and inadequately, foundations were laid for a juster order of life. Tomorrow’s foundations, upon which the future will build, no matter who becomes President or which party comes to power, unless selfish and blind leaders will to choose either the chaos of violence or the chaos of dictatorship, which is violence plus tyranny. I do not believe that President Roosevelt consciously set out to avert a revolution. It is to his lasting honor and it will be perhaps to his immortal fame, that on the one hand he averted a revolution of ruthless destruction and on the other hand inaugurated what the ages may yet call an era of “revolutionary justice” for the American democracy. . . . Naturally, there have been mistakes and blunders in the course of such years as have made it necessary for the President day after day to reach momentous decisions and to act in relation to problems of farthest-reaching consequence. The leadership of the President has been good, because he has courageously sought the right and because he has gone on undeterred in his dedication to well-being, the less scanty and the more abundant life, for all Americans. . .

The President has had to face and still faces the challenge of the ruthless tories who demand security for themselves and for the value of their securities but, like the young gentlemen in the Legislature of New York, are unconcerned about the life and well-being of the millions of these workers who together with their families constitute our America. These dragged America down, these with unappeasable selfishness and incredible unwisdom dragged America down to the level of 1929. I do not say that the President substituted a paradise in 1933-36 for the Coolidge- Hoover concocted inferno of 1925-33. But the President has helped us to save ourselves. That is his great and imperishable achievement! Not chiefly by adding twenty billions to the yearly income of the American people, but by giving back to the American people the faith which they had lost or were losing, that a decently just and equitable life is possible under the forms of democracy, that law is not forever to be tortured to the advantage of the few and that the economic as well as political security of every man, woman and child is ineradicably written in the charter of our American democracy!