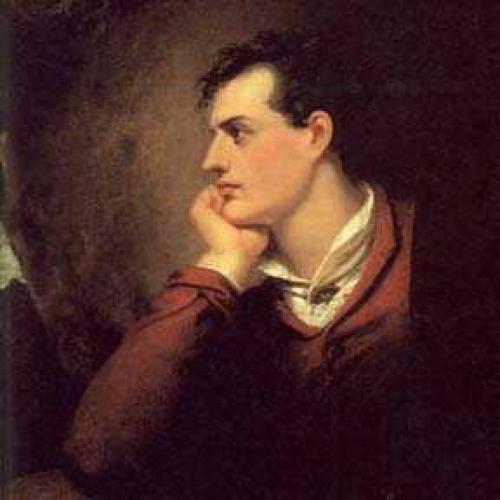 A given life, even that of a poet, doubtless must be assembled and written dispassionately and even “scientifically,” but seldom has the voice of passion been cushioned with dispassion as in this book. The biographer’s risk is that of achieving only a diagram of poetic emotion, an echo of the intensities that burned long ago. What saves this life from being a catalogue of data is the vibrancy of the Byronic temperament which still lingers in the long-ago letters and memories, and pours blood into the inanimate page.

Byron was the very voice of Romanticism, brooding upon itself in dark, Olympian melancholy. May we not discern remnants of it in our own unromantic age? Saint-Exupery was a kind of winged Byron. Some of Hemingway’s heroics, gin-bottle and all, in Spain and on the periphery of Paris at the liberation, showed a real affinity with Byron’s quest for the grandeur of action. We might also see in the meditative Childe Harold or in Manfred a little of Existential man who seeks a modus vivendi with the indignity of a human condition driven within its eternal orbit of death. Existential man, however, is intellectual and philosophical; he is a projection of rational man. Byron was all action and passion.

The boy Byron was the spoiled, abused darling of a tempestuous mother; she smothered her son with kisses but was capable of kicking him in the next moment with equal intensity. A servant initiated him at nine into some of the mysteries of sex so that he felt later that he “had anticipated life.” Love, affection, passion, became mixtures of delight and pain, tempest and calm. Small wonder that Byron’s relations with women blew hot and cold, and that he found certain men more congenial and could even love them with a “purer” passion. He could be attracted and repelled by the mercurial and eccentric Caroline Lamb; she was as unpredictable as his mother.

Otherwise there was solace, either with common Venetian women, who accepted him for his beauty with animal delight; or with aristocratic women who possessed the benign side of his mother, above all his half-sister Augusta Leigh, who rang in what we might call an Oedipal variant for Byron. Finally, in the long gallery of passion and disaster, there was Teresa Guiccioli, who constituted Byron’s “last attachment” and provided a certain protective comfort. Byron’s strange marriage to the blue-stocking Annabella Milbanke, can be partially explained as intellectual conformity and a piece of cold opportunism indulged in by a non-conformist. It had no relation to feeling. And since Byron was a man of feeling, this amounted to a denial of self. It comes as no surprise that from the first he should have behaved as one performing a distasteful duty.

The central and pathetic irony of his life—surely one of the most dramatic ever lived by a poet—was that of Byron’s physical plight. To be a peer, the mold of form and the glass of fashion of his time, to have the accent of passion so that women besieged him, and with this to carry about a club foot, was a supreme and mocking indignity. Stendhal, with his novelist’s pen, wrote a poignant sentence after seeing Byron in Milan. “Byron arrived late,” wrote Stendhal, “and he was obliged to cross a spacious saloon in which every eye was fixed on him and his club foot.” To be powerful—and maimed: to tower above men—and to limp behind them! The poet’s wound was not something to be nursed within; it was exposed to the whole world. One understands readily Byron’s need for a life of excess; even the swimming of the Hellespont did not suffice. He had to prove himself every minute of his life. “I want a hero,” he announced in the opening line of Don Juan. He could never be heroic enough to satisfy himself.

Byron, pursuing his ideals and gratifying his sensual pleasures by a process of surfeit, was distinctly aware that life, not literature, was his vocation. Poetry was for him a way of blowing off steam, ridding himself of the tension engendered by excess and not always gratified by it. He recognized this in a shrewd insight when he said that poetry was “the lava of the imagination whose eruption prevents an earthquake.” This suggests to us the explosive quality of Byron’s feelings. It points, moreover, to the second-rate in his poetry, or, as Yeats expressed it, “a first-rate man, who was somehow not first-rate when he wrote.” Byron was a witty rapid improviser and the least impersonal of poets. Poetry was made an integral part of his daily experience, and the most serious reproach to be addressed against this book is that it leaves out virtually all consideration of the poetry. There is no attempt to assess the work, to consider it as art, to arrive at a critical estimate of it. And little effort is made to relate it to Byron’s experience.

In sum, how “objective” can a biography be when it is as rigidly chronological as Professor Marchand makes it? when, in the midst of a love affair, the story halts because trivial detail and anecdote must be fitted into calendar place? The calendar effect results for one thing in a catalogues of lecheries, so that Byron is made to seem more of a heartless rake than he was. The difference between a dissolute woman-chaser and a man like Byron lies precisely in the fact that for the poet the qualities of love and passion transcend mere concupiscence. Marchand is surprised that certain readers of his manuscript taxed him with “not presenting a very favorable picture of Byron.” He is quite right in feeling that his job was to be neither favorable nor unfavorable; yet his method does end by doing scantier justice to his subject, since action is often recorded without a search for motive, or inquiry into a pattern of behavior.

Of the romantic movement, the broad background of Byron’s life, the great ecstatic shudder of hope Byron generated in Europe, we get only hints; and although the biographer visited the scenes of his subject’s life, no sense of scene is evoked for us, save where Byron himself does so in his letters. We are given a poet without his poetry, a creative being without his landscape. This is a pity, for the scholarship itself is on the whole exemplary.