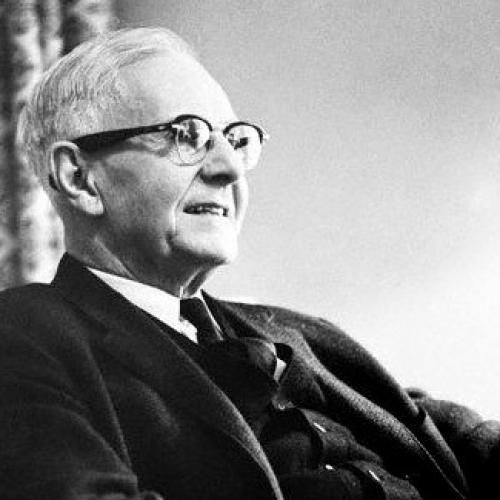 Self-taught, Thomas Hardy knew a good deal about English poetry when, in his fifties, he laid the fictions by and returned to his first love. He was an honest craftsman, attending meticulously to what we probably think of as the three dimensions of a poem. First the plot, or argument, a human representation struck off smartly, developed clearly and rounded off to a nicety. Then the meters, which this poet loved with a passion and managed with utmost ingenuity. And finally, the poetic language, the flowering habit of a thing that is alive, displaying its grace generally and coming into intermittent focus in special configurations of leaf or blossom. I am indicating such a careful sense of a complicated job as perhaps only the neophyte will want to hold to in a poetic creation. But it may be that he can afford to forget the several divisions of his labor only if and when they all will enter into the three-in-one of a single habitual and unconscious skill. There is often in Hardy’s poems the visible quaint rightness of a workman going by good rules.

His metrical formations are clean and fresh. Oftener than not, he forms the handsome stanza patterns out of ordinary iambic or iambic-anapaestic lines. But there is something special in the way he can make stanzas out of variations upon the “folk line,” which nowadays we call the dipodic line. Nothing else could have been so surely suited to certain of the country poems. And how to describe it? It goes bade to the Anglo-Saxon meters; it persists against the romanic or syllabic meters which followed the Normans into England, it lingers in the rhythm of the oral ballads; then the dominant university fashions in the Renaissance just about swept it out of existence. But in the eighteenth century it comes back into print, in the recovered ballads, and in Mother Goose. Into print, and into vogue as a popular form for second-rate poets to adopt whole-heartedly, and first-rate poets sparingly, but more and more frequently as time goes on, right down into our own period. There are just two things to look for if we would hear the dipodic rhythm. The lines are symmetrical, and so are their fractions. The original folk-line had eight beats with a break in the middle; but by division arose the four-beater, with its own break in the middle; and if the stanza wants it there can be some playing—as often in Mother Goose—even with the two-beaters. At this point division ends, and hence the term dipodic, meaning that the line has two beats at least, and if longer has a number of beats of which two is the only prime factor. The other feature is perhaps the crucial one. Often a four-beat or eight-beat line will drop its last beat and look uneven; but so strong is the dipodic expectation that we allow for the missing beat by a full musical pause. Thus the folk rhythm has an extra musical quality, not in the syllabic or university poetry at all. Hardy would have known exactly how this rhythm was scored in the hymn-books from which as a boy he had sung by note. In 1867, when he was still trying to market his early verse, he wrote “Neutral Tones” in the rhythm, and here is the first stanza:

We stood, by a pond that winter day.

And the sun was white, as though chidden of God,

And a few leaves lay on the starving sod;

They had fallen from an ash, and were gray.

The stanza consists in three four-beaters followed by the climactic three-beater. Yet the poet is sufficiently versed in the university meters to know that not only must there not be more than two unstressed syllables between the beat-syllables, but that fallen may count as a single syllable, according to a usage established by the stately poets of the Renaissance. He is at pains also to put the comma exactly in the musical middle of the fourth line after ash, as if to oblige us to make the one-beat pause at the end.

A poem which stands not many poems away from this, yet was composed much later, and peopled with familiar characters from the Wessex novels, is “Friends Beyond.” It illustrates many of the poet’s qualities at once. The argument is a fantasy of Hardy’s very own. He is in his fifties now, still hurt by the trauma he suffered in his twenties—which were the 1860’s—when he went to London, and the faith in which he had been nurtured was blown up in his face by the evolutionists, and those new Biblical scholars who for certain essays were called the “Seven Against Christ.” It was a bad hurt, but perhaps only accented what would have been anyway the melancholy set of his temperament. So in the poem the spirits of the old friends who now lie in Mellstock Churchyard are whispering to him about their “triumph” in the grave: they are delivered from “terrestrial stress,” and “chill detraction,” and even “fear of death.” They speak to him both in unison and separately. Thus two of them in one of the stanzas:

Squire.—“You may hold the manse in fee,

You may wed my spouse, may let my children’s memory of me die.”

And the poet observes:

Which in life the Trine allow

(Why, none witteth), and ignoring all that haps beneath the moon,

Robert’s kin, and John’s and Ned’s,

And the Squire, and Lady Susan, murmur mildly to me now.

Among poets there is more dwelling on mortality than on immortality. And there is something sporting, and purifying, in this poet’s resolute irony. But he was to become easier about it as he would grow older, and he was already old. He had a gentle nature, and his humble industry was prodigious; how should the knowledge of death corrupt him?

The stanza here is composed of two rhymed eight-beaters holding suspended between them a four-beater which is unrhymed. But its attachment looks forward: in the following stanza, and so on by unbroken progression through all the twelve stanzas of the poem. This rhyme-scheme is no more nor less than that of Dante’s terza rima, a form exalted among all university poets. We have attended a startling marriage between the high and the low.

I recall my excitement when I read in the New Republic at least two poems which Hardy wrote in the 1920’s, never matched so far as I know by another octogenarian poet. It would have been Ridgely Torrence who chose them. One was “Haunting Fingers: a Phantasy in a museum of musical instruments.” It is not in the folk rhythm as I hear it, but has a virtuosity in that two different kinds of stanza are employed systematically. Five separate times there are two stanzas spoken by the instruments in the one form, followed by a stanza of narrative in the other form. The second and third stanzas of the poem read:

I watch, though Phosphor nears,

And I fain would drowse away to the utter end

This dumb dark stowage after my loud melodious years.”

And they felt past handlers clutch them,

Though none was in the room,

Shrunk in the tomb.

Still later there was a wonderful day when I found another poem, in a British publication: “The Missed Train,” in five short quatrains. The speaker recalls the time in his youth when, returning from a visit to his sweetheart, he had to put up in a hotel room at a wretched railway junction, but he dreamed all the night of “the unwitting cause/ Of my lodgement.” He concludes:

Thus onetime to me…

Then from now. But such happenings today

Fall to lovers, may be!

Shrink the visions then vast in me.—Yes,

Then in me: Now in these.

It is beautiful, and final. We feel that this is the only way, in just these verses word for word as they stand, for the old poet to conclude his very late poem.