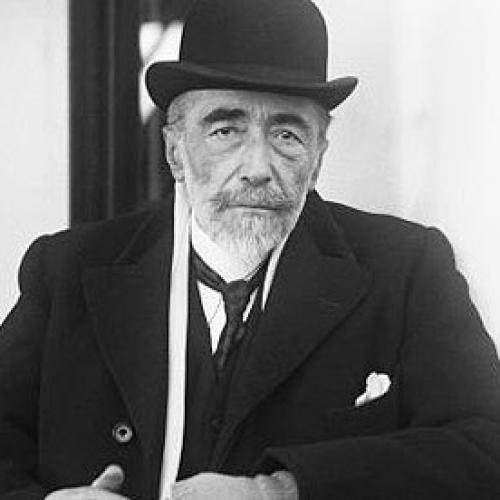 A friend of Mr. Conrad’s has kindly communicated to us the following letter denying some assertions that appeared in this country not long ago:

… I imagine that ------ called me a Jew in his publication as a manner of insult and in the hope of causing me extreme annoyance.

But I don’t feel annoyed in the least. Had I been an Israelite I would never have denied being a member of a race occupying such a unique place in the religious history of mankind. I send you this disclaimer simply in the interest of truth.

I imagine there is no scruple which would prevent ------ from calling me Mohammedan or a worshipper of Baal, for some reason of his own, or from the mere love of lying. Neither is there anything in him to prevent him calling me a forger, a burglar, a pickpocket or a cardsharp. This is a statement of fact which can be disproved as follows:

I am in possession of the following documents:

(1.) A passport in the name of Alexander II, Emperor of all the Russias, and signed by Prince Galitzin, Governor of the Province, granted in 1868 to my father, “the Nobleman Appolinary N. Korzeniowski, and his son, Conrad, aged ten years, to travel abroad for the benefit of his health for three years, etc., etc.”

(2.) Copy of my parents’ marriage certificate from the register of the Roman Catholic Consistorium of the government of Volhynia.

(3.) My baptismal certificate delivered in the usual way by the officiating priest and registered in the parish church.

(4.) The Act of Decease of my father (28 May, 1869, Cracow), delivered by the parish priest of that quarter of the town, minor canon of the cathedral, stating distinctly that the deceased died in the Roman Catholic religion and duly shriven according to the rites of the church.

(5.) An official advice from the Burgomaster certifying that I had been elected Burgess of the city of Cracow with the remission of the usual fees, “to honor the memory of his father as a Patriot and Man of Letters,” and addressed to the Highborn Lady Teofila Bobrowska as the (maternal) grandmother and the natural guardian of the minor (1869) Conrad Korzeniowski.

(This last document established my descent on my mother’s side.)

In sending these and other documents in 1864, when I became a British subject, my maternal uncle advised me that if I wanted to know something more about my descent I would find it in the archives of the Province of Podolia, relating mainly to the eighteenth century, but (he wrote to me at the same time) that he had had researches made already, which showed that during that century my paternal ancestors were men of substance and what may be called “prominent citizens” frequently elected to provincial offices of trust, and forming alliances in their own modest sphere after the usual several years’ service in the armies of the republic. My paternal grandfather served in the Polish army from 1817 to 1820, when he sold his land in Podolia and came to live on his wife’s estate in Volhynia. Their fortune, which descended to my father, his brother and his sister, was confiscated by the Russian government in consequence of the rebellion of 1863. Those are the origins and this is my history before my arrival in England. After that it is carried on documentarily by a series of my discharges (V. G. as to “character” and V. G. as to abilities) as seaman and officer in the British Merchant Service up to the year ‘94. From that time to the present day it is carried on by my written and published pages, eighteen volumes in all, which have a certain amount of recognition. The police of the County of Kent have nothing against me—in fact, if anything, I am rather honorably known to  them; even to the extent that one day when our car broke down on road the son of our  local superintendent of police came out to the rescue—five miles—in his own car, and was perfectly charming. But that may have been on account of my wife, who is a very popular person, and—I add—not a Jewess.

So if it pleases—to declare me an anarchist, a forger of bank notes or anything like that, I trust you will be good enough to affirm to everybody that it can disproved on documentary evidence.