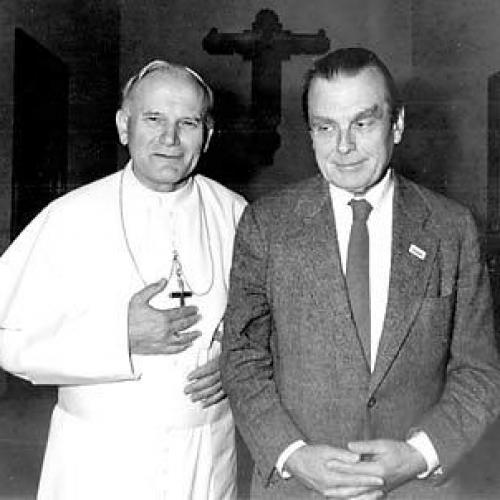 Raised in the Catholic religion, I am not indifferent to the remarkable successes of American Catholicism; I read its press, I take sides with certain of its well-known figures against certain others, and I am even perhaps a good parishioner. Or maybe not. The division of people into believers and nonbelievers has always made me somewhat uneasy because it assumes a qualitative leap, a different substance for the “believer” and the “nonbeliever.” I suspect, a few exceptions aside, that we are dealing here with a decision, a will to belief or disbelief, resting on considerations which, relative to the heart of the matter, are rather secondary, and also that the imagination of those who attend mass every Sunday is no different from that of those who never set foot inside a church. I would even push this further—the difficulty that the imagination must overcome to return heat and life to religious symbols may itself be a significant factor in the triumphs of Catholicism, which does not favor private meditations, and which demands, or has until now, obedience above all. Catholicism is safer; the decision to be Catholic does not properly concern one’s faith but the submission to or the revolt against authority. Responsibility has been shifted and the faithful comply. They kneel, rise, kneel again, sing, take communion, and all this is done ceremonially, in a state of detachment.

There is the warm, human presence of a God who took on flesh in order to experience our hunger and our pain, so we would not be doomed to strain our eyes upward but could be nourished by words spoken by lips like our own. And the God-man is not one of us in our moments of pride and glory but one of us in misfortune, in slavery, and in the fear of death. The hour when he agreed to accept suffering conquers time; centuries of change and passing civilizations are insignificant and short-lived, and no wasteland of cement, glass, and metal will make man different from those men Christ addressed in Galilee. He still has the right to proclaim: “I am love.” There is the son and beside him the Mother, the eternal mother, forever grieving over her child’s suffering, the protectress, the intercessor. Thus, in the imagination, the dogma of the Trinity imperceptibly flows into another, unformulated dogma, the Trinity of the Father, Mother, and Son. The radiance of that Trinity confirms the community of the living and the dead, the communion of saints, dialogue, and intercession. In this way a purely human space—filled with the rays which dart from eye to eye, from hand to hand, and with voices in prayer and supplication—is constructed alongside physical space. All humanity, past and present, is, in truth, a Church persisting outside ordinary space and time, a Church opposed to the necessity built into the universe. Catholicism is the most anthropocentric of religions and, in some sense, through its own excess of divine humanity, it resists the exact sciences which annihilate the individual. Thus, paradoxically, it is less susceptible than other religions to the disintegrative influence of science and technology. In Catholicism, even Heaven and Earth, the Descent and the Ascension of God are not like relations between worlds but like those between human forms.

At the same time, however, since the Catholic catechism, a fortress built on a crag, cannot be chipped away, what constitutes its strength is also its weakness. The mind receives advance warning that it should not venture outside the walls of the dogmas and the mysteries of faith, and should bow humbly to things which it does not cease to find absurd even when it denies its own nature. There is merit to that interdiction because Catholicism signifies a participation in a feast, the partaking of bread transformed into the actual body of Christ. A mind infected with rationalism trying to explain how a little flour and water could also be the body of God led Zwingli to the proposition that Christ’s presence in the wafer was purely symbolic. For Protestantism that was the beginning of the decline of faith in the Eucharist, that is, the beginning of the end of the sacral feast. But how many Catholics, when receiving communion, fail to overcome their own doubts and resort to a symbolic interpretation, since their minds can neither surmount nor avoid the obstacle?

Not taking part in Sunday mass is a mortal sin and before receiving the Eucharist one must be absolved of that and other mortal sins through confession. But the faithful cannot grasp the meaning of Original Sin, which is reduced to the breaking of a taboo by the catechism, nor can they grasp the meaning of sin in general. Sin is now being broken down into clusters of psychological and sociological determinants; it is being universalized, changed into a sense of undifferentiated guilt, and it seems pointless to whisper one’s transgressions against a set of numbered regulations through the confessional’s grille. The psychoanalyst’s confessional has already taught us that what is hurriedly recited to the priest will not be the truth and that absolution is obtained by feigning regret, while one actually treats past transgressions as more or less inevitable.

In a moment of sincerity nearly every Catholic would no doubt admit that he is unable to unite the separate points of doctrine. Thus, for example, the Credo does not demand belief in the immortality of the soul, only belief in the resurrection of the body and life eternal; that is something completely different from the astral travel of souls liberated from skeletons and flesh. But at the same time the imagination is required to deal with the mystery of eternal punishment for the evil so deeply rooted in some people that it refers us back to yet another mystery, that of predestination and freedom, and thus the resurrection of bodies is linked with eternal physical torment.

But couldn’t someone who wished to understand what he believes commit an error? That would be a fair objection had not Catholicism labored for centuries to erect a magnificent intellectual structure around the dogmas and had its theologians not formulated all man’s problems with his own existence into syllogisms. As soon as a worshipper on his church bench does not limit himself to mindless compliance, which is in any case impossible, he encroaches on the fields tilled and cultivated by theology, which does not at all mean that he had to read any theological works. The very intellectual structure that Catholicism demands emphasizes the obstacles the contemporary mind encounters there. For this system, perfected in the thirteenth century (and still far from renewal, no matter what anyone says) belongs to another layer of civilization, another episteme, and that once lucid architecture is now becoming less self-evident.

The training a Catholic receives in childhood inclines him to respect mystery; life and death conceal their depths beneath layers of meaning. Mystery compels humble submission to an authority that derives its power from the will of God, but the mind wavers between resignation and the hope that there is some path that leads into the heart of the fortress. Were it not for that hope, there would be no stands with Catholic philosophical literature in paperback in the vestibules of American churches. I, however, assume that a religious man who brings home a volume of the Summa Theologica and sits down with it for some serious reading is making a decision not too different from the decision “to be religious.” The ideas he encounters offer insurmountable resistance; they weary him. It could be said that the sleep sealing his eyes marks the line between the promise and its defeat.