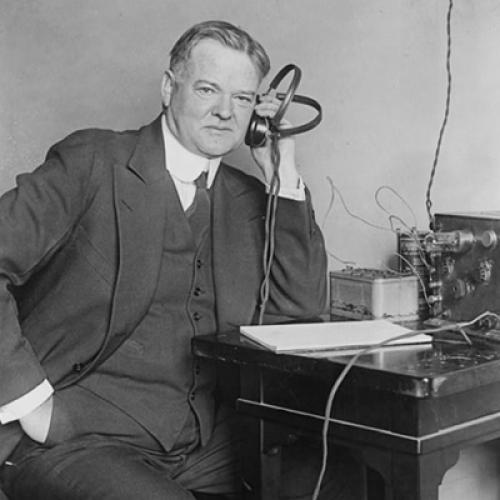 Herbert Hoover’s defense of his administration at is like the climax of a Greek tragedy. It represents, as in Aristotle’s definition, the struggle against inexorable fate of a good but not wholly guiltless man. Elected four years ago on the flood tide of success and fame, he now faces certain and probably overwhelming rejection because of the misfortunes which have overtaken both him and his people. Though he still thinks of these misfortunes as being undeserved, their origins are inextricably interwoven with his own past. He was a part of the administration which led the country up the mountain and to the brink of the precipice, and he took credit for the ascent. He was blind to what lay ahead; he grasped responsibility by the plea that still greater triumphs awaited us in the same line of march. Disaster took him unawares.

He is conscious of having waged an unremitting battle for his followers according to the best of his lights; it hurts him deeply that they have turned away. He himself was an farm boy, nurtured in the spirit of pioneer individualism; he has done what any such boy of sufficient character and intelligence would have been expected to do. What is the matter? In contrast with his former vaulting hopes, the best he can say is, it might have been worse. He has been in daily contact with the perplexities and details of what has happened, but he does not understand its essence. He refers to the root causes as an Athenian might have referred to the mythical vengeance of a god—something profound, universal, beyond the ken of little man. But he still clings desperately to hope.

How much he has tried to do, and how little he knows what are the effects of what he does, are clearly shown in the more detailed economic sections of his speech. His own understanding of economics remains, as it always has been, muddy and confused; but certain strains of clarity have always obviously been introduced by the banker type of mind. He has taken over from men like Ogden Mills and Eugene Meyer a rationale of the way to fight depression and restore prosperity; and because he has been made to see so much more clearly in this direction than in any other, he has persuaded himself that doing what the bankers wanted done was really in the best interest of the Iowa farmers, the debtor classes in general and the unemployed. He has created a fable about the fight for a sound policy which in parts is true, in other parts conceals the truth, and in some important respects presents a grotesque distortion.

Take his defense of “sound money.” What does he mean by it? A dollar which does not change in purchasing power over commodities? At times he seems to mean this, as when he tells the farmers that what they need now is higher prices. But at other times he talks of “dangerous inflation” when he opposes measures calculated to restore prices to something like their former level. Most of the time, as when he denounces “tampering with the currency,” he really adopts the bankers’ point of view that sound money is money which has a constant value in gold, no matter how much gold may have appreciated in terms of commodities. This, of course, really leads in time of depression to a deflationary policy. It constitutes serving not the debtors, but the creditors. The owners of bonds and mortgages who are paid interest and principal at a time when prices are abnormally low make an immense profit at the expense of those who borrowed the money from them at a higher price level. This obvious fact seems utterly to have escaped Mr. Hoover. He ignores it entirely, for instance, in his argument that going off the gold standard would have injured the debtors. There he speaks only of the fact that paying the principal of gold bonds, in currency at a discount in gold, would be a hardship. But how large a proportion of debt must be paid in gold? Ordinary farm mortgages certainly are not gold debts, and even the interest on “gold bonds” does not have to be paid in gold. In any case, if inflation had occurred as a result of going off the gold standard, the increase in commodity prices would have gone a long way to cancel any disadvantage to debtors caused by the depreciation of currency in terms of gold. If this part of Mr. Hoover’s speech had been delivered by a man more expert in the subject, it would have to be put down as deliberate misrepresentation.

His story of the heroic fight against abandonment of the gold standard seems to have been exaggerated for campaign purposes. At no time was the gold standard in the threatened by the withdrawal of gold from our banking reserves by foreigners. They could take only as much gold as their available funds here could buy; the amount of these was known, and was too small to threaten the adequacy of the reserves. When foreigners had taken abut all they could in this way, gold exports stopped, and this in turn aided confidence in this country. This eventuality was not due to any administration policy; it was automatic and predictable; and it was in fact predicted. Only Americans could have put us off the gold standard by hoarding gold or sending it abroad, wherever they might think capital was safer. But such a refuge was hard to find. Domestic hoarding was, of course, extensive, but most of it was in the form, not of gold, but of currency. The motive for much of the hoarding was undoubtedly fear of bank failures rather than fear for the currency. The Glass-Steagall Act helped to stem the tide of bank failures; it was also constructive in that it made possible the pursuit of an aggressive policy of buying government bonds by the Federal Reserve. But this was a different matter entirely. To represent it chiefly as a heroic defense of the gold standard is sheer melodrama.

Again, the “sound” policy of balancing the budget was a bankers’ policy, pursued in the interest of financial institutions—our great creditors. It may be argued cogently that only by protecting these interests at all costs could we, within the limits of the capitalist system, prepare the way for a possible revival. But it is either disingenuous or stupid to represent this course as being in the immediate interest of debtors, farmers, and the unemployed. On the contrary, it shifts to them a major part of the losses of the depression. Why? Because the rigid economy necessary to produce a balanced budget limits governmental expenditures at the very time when it is most necessary to expand them as a means of unemployment relief, direct aid to debtors and a really adequate program of public works which may create employment, put money in circulation and tend to raise prices. ’s claim to credit for a large public-works program is wholly false. Public works have greatly contracted during the depression. He has fought every measure which really would have led to a net expansion. If he had wanted at all costs to aid the unfortunate and increase prices, he would have enlarged governmental expenditures and would have borrowed the money with which to do so. Thus he would have risked further depreciation of bond prices and injured the creditor class. What he really did was to try to save the capitalist system by saving the creditors at the expense of the population at large, letting the devil take the hindmost. But he will not admit the necessary cruelty of this process, or accept as just the resentment of those whom it has injured. He smooths it over with fallacious, though probably sincere, sophistry.

The most glaring of his confusions is of course that in relation to tariff and farm relief. When reviewing this subject he neglected entirely to mention the one important American farm industry which is really kept alive by the tariff—sugar growing. To mention it might have been embarrassing. But how can he possibly keep on pretending that protection is of the slightest advantage to grain and cotton growers, or even to most of the livestock raisers? In the case of cotton, of course, the protectionists have not even made the bluff of giving it a tariff. If economics is certain about anything, it is certain that farmers who raise crops, a large part of which must be exported, cannot benefit from a tariff. The farmers have learned from this by bitter experience. And yet Mr. Hoover solemnly and even with emotion hands them the same old bunk. A President who tries to enlarge the export market while obstructing imports exemplifies one of the most obvious and destructive contradictions of nationalist capitalism.

In these contradictions is the bitter essence of Mr. Hoover’s tragedy, to which he is totally blind. On every hand he is enmeshed in contradictions. The very optimism and the aggressive devices of prosperity, in which he played so large a part, made depression inevitable. Once depression had come, he could not defend the system with which he is identified without protecting favored classes at the expense of the disinherited and the unfortunate. Something like Fate drives him to incur the hostility of the people, to suffer defeat and dishonor, because every effort he makes in pursuit of the faith which he blindly accepts injures those whom he thinks he is serving.