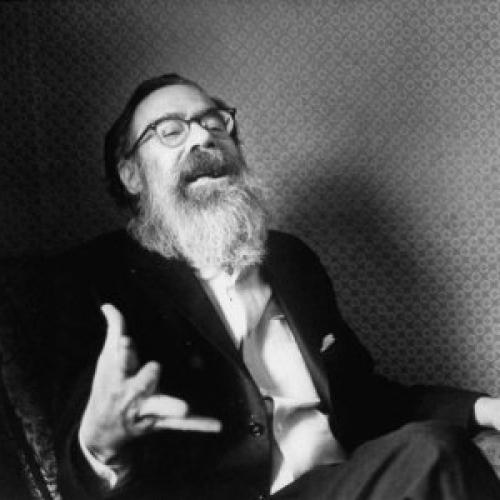 Candor has long been known as one of Spender’s chief notes, both as a writer and as a man, and it looks forth at us, tranquil and friendly, everywhere in this collection of his recent criticism. It has come under reproach for a pose. Whether it is or not, it serves him well. The company is pleasant, the conversation good, the tone is very personal, even confiding, the subjects attractive. If anyone’s social life has been defective lately, I recommend this volume highly.

Unlike Auden, who recently allowed as how he has never written a word of criticism unsolicited, Spender is a professional critic. Of course I do not use the word in an honorific way; I mean that he is willing to undertake the responsibility of judging, and that he works from certain comprehensive prepossessions. Both aspects can be illustrated with a passage from a useful paper (“Greatness of Aim”) contrasting Auden and Thomas, the most dazzling English poets, I suppose, of our time (I never know just what Eliot is, but it is certain that Auden is not an American):

“Today there is a vice of thinking that opposed forces are symmetrically balanced (the East and West as bad as one another—McCarthy in America, slave labor camps in Russia: so perhaps I should explain that because I think Dylan Thomas and W. H. Auden opposites I have not fallen into the contemporary assumption that they must be equal forces. Mr. Auden’s seems to me much the more considerable achievement: although, superficially, he may seem a less ‘poetic’ writer than Thomas, he has gone much further in achieving the main task of contemporary poetry, which is to transmute the anti-poetic material of contemporary life into transparent poetry.”

I feel considerable sympathy with both the judgment and the generalization. It is clear that Auden’s crazy, magisterial early work is now undervalued, and likely that Thomas’ spell is still so over us that we overrate his work taken as a whole; moreover I don’t trust Thomas’ early work any more, ingenious, entrancing and original as it is. I think he became magnificent only later and will look very uneven, like most romantic poets, to readers in the future.

Spender’s dominant interests, perhaps, in this collection, are the Self of the poet—how it works, what it does—and the British-American (or American-British) relation in literature. With regard to the first, I am obliged to confess that I have never much liked the essay called “The Making of a Poem,” from which the collection takes its title.

This is partly because I cannot like much the poem the composition of which it rehearses (one of his own—though I would like to explain in passing that I am not lined up with critics hostile or indifferent to his poetry) but even more because it dazes me. Most of the poets with whose writing practice I am familiar revise a good deal. Yeats and Lowell are extreme cases—or so I thought until Spender published “The Making of a Poem.” But good heavens, if everybody versioned and versioned this way, there would be damned few poems around. I don't know how Spender has got so many poems done, especially because he does many things besides write poetry: he is a brilliant and assiduous editor (I would call Encounter the most consistently interesting magazine now being published), he writes plays and fiction and has done an autobiography, he lectures and teaches, he sponsors conferences and causes.

Since James, Eliot, Pound, writers have gone east; since Lawrence, Huxley, Isherwood and Auden, writers have come west in what Spender terms (in a Texas lecture) “the Immigration in Reverse.” If there is anyone more knowledgeable about this phenomenon (to take it as one, not two) than Spender, I do not know who it is. He understands much better than most Englishmen who have sailed or flown in on us both the misleading force of the familiarity that, owing to similar languages and cultures, they feel here, and the immense difficulty they actually experience in getting hold of American intellectual life at all. But it is unfortunate, I think, that in the light of later experience he has revised “The Situation of the American Writer,” an article of 1949, so that it now truly represents neither 1949 nor 1962; I wish he had reprinted the original and then done a postscript. Conditions do indeed alter very rapidly. I take one general and one particular observation that seem to me admirable. He cites Keats, early Gide, Rilke as instances of a sense that “the European failure is often a kind of snobbish success, at any rate among a small circle…But in America there are scarcely these public failures who are secretly private, highly superior successes. There is very little sense within a civilization which is  changing and expanding so rapidly, that if one misses one’s time, another time will discover one.” I think of James Agee and Nathanael West as exceptions here, but I believe Spender has put the desolate rule accurately; between failure and acclamation in Time magazine is no-man’s land, where most professional writers live. The universities, awards, paperbacks help: the medical corps. The particular observation is about T. S. Eliot: “In much of Eliot’s writing there is an underlying fear of provincialism, a great admiration for the places which are central and which therefore connect with the main stream of tradition and the intellectual life of the past…In Four Quartets he looks for shrines left in the countryside, far from the centers of civilization.”

But the paper here which pleases me most is one on Housman. Housman presents a problem which not even Edmund Wilson and Orwell have been able to solve. Here is a poet who, after writing almost no serious verse (he was a master of light verse) until his mid-thirties, suddenly burst forth briefly and thereafter fell largely silent though he lived on to 70; a failure at Oxford who became one of England’s greatest classical scholars since Bentley and Porson; a sadist unrivalled even in the history of scholarship. There was a story at Cambridge—where I went into residence a few months after he died there in 1936—to the effect that that event was succeeded by a spate of classical publication such as Europe had never seen before. Scholars had been holding up their works for years lest he review them; wisely—for among his papers were found more of the elegant terrifying characterizations of his colleagues for which he was infamous, but without the names filled in yet. A man with one friend, an athlete named Jackson who went off to India, a man who reminds one now of another Cambridge scholar-poet-bachelor, Gray, now of T. E. Lawrence (an affinity Housman recognized), now of nobody; a mind as bleak as Beckett’s, as inventive as Charles Addams’; a poet still everywhere popular, author of a handful of masterly poems seldom if ever anthologized, hardly read, and despised by or unfamiliar to almost every respectable critic in England and America.

Spender does not solve the problem. But his abilities are nowhere more evident than in his addresses to it. He quotes the overwhelming lyric, “When the eye of day is shut,” praises it justly, and continues: “All the same, even here, there is something lacking, some element which has not been stated, some nagging Housmanish secret. One feels that the poem has its autobiographical aspect; and yet this is realized neither in the situation of the speaker of the poetic monologue nor in that of the ‘hearts that loved him’.” This could not be bettered, and allied to it is the perception that “in this poetry of unrequited love, the loved one is not blamed for the failure to return love.” Best of all is Spender’s defense of some of the (finest) poems against the assumption that because of their adolescent attitude they cannot be taken seriously at all: “It is possible—on the contrary—to argue that for a poet of limited aims, strong ideals, and a perfectionist technique, adolescence—according to Housman’s way of interpreting it—is an admirable theme. This theme is the stage in life where idealistic and sensuous impulses establish a precarious trance,” and so forward, at a length I must not quote. The whole little essay—which ignores, though, the Schadenfreude in the poetry—is a joy, and the book worthy of one of England’s most distinguished men of letters.