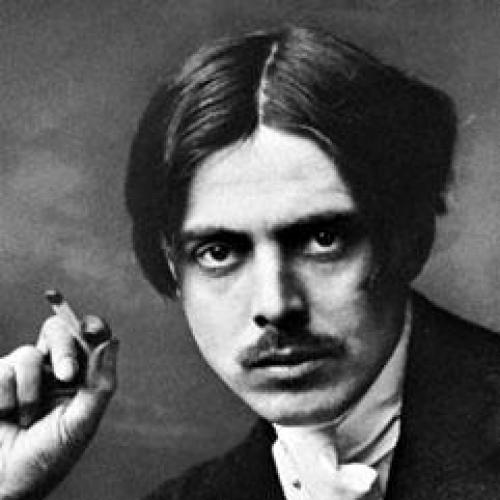 When an art dies, there is no announcement in the newspapers, as in the case of the demise of an eminent citizen. So no one knows that it is dead. It is still spoken of as if it were alive a modest little affair, though it made a great stir at the and kicking.

This article is a sort of obituary notice. It is written to announce the death of "abstract art."

At last the Cube, the Cone, the Cylinder are still forever. They will never again stalk the streets of Paris. The Equilateral Triangle has breathed its last. Bracque's abstract bric-a-brac is fast becoming junk. The most amusing collage will fetch nothing in Europe. Brancusi's Egg has gone to join the Dodos.

But in all its forms—not only in its purest absolute—abstract art is no more. It is in vain to cite Picasso—his latest spawn is merely reflex action, from a lower center, that does not count any more than the stampede of the chicken after its head has been severed. A little kicking goes on, of a morning, in Monsieur Leger's studio, no doubt (for he is still alive, of course). But all such activity today—however corrupt and involved with natural form—belongs to a movement that is dead. It just runs on for a while, here and there, the work of practitioners no longer young. But it always was, I am afraid, a bit of an automaton.

Abstract art—the real article, the simon-pure—was a modest little affair, though it made a great stir at the time. It had no pretentious metaphysic. It sought to be a visual music—a perfectly respectable ambition—but it was classed (by Herr Hitler among other people) as a peculiarly decadent idea.

Myself. I painted a number of “abstract” fugues, which nobody could understand, but which were in fact severely classical. Had this been revealed at the time there would have been a considerable scandal. People supposed these incomprehensible oddities to be so revolutionary and satanic that the thought of them kept them awake at night.

It is with genuine regret that I announce the  passing of that jolly little movement—just as in a sort of way I should hate to see the last swollen-footed Picasso nymph clump off the stage for the last time. I like to see her lumber on, in the Modern Museum, and squat there, staring blankly at Hoi Polloi.

The abstract is dead of a very customary complaint of civilized man: boredom. It was never very hardy, I am afraid. The last war hastened its end—in Europe, I mean. For here in the United States it arrived much later. Its effective life was of a very few years' duration. Already in 1924 I had dropped it, and although about five years ago several people in England (notably a certain Mr. Ben Nicholson) attempted to apply artificial respiration, 1913 to 1923 was its utmost span in its lands of origin.

Miss Georgia O'Keeffe is probably its best known exponent in America. When it began here I do not know; but Miss O'Keeffe left it some time ago for the red hills of New Mexico and the pea-green valleys of Quebec. Those are very "abstract" places, or lend themselves to a diluted abstractionism. But they are mere shadows of the real thing.

All along the line nature has won. There is, I think, no one today in America (I am sure there is no one in Europe, unless you count Mr. Nicholson as a person) who will pursue forms and colors for their own sakes. No one any longer pretends to that disinterestedness. Nobody will have anything to do with forms and colors unless they are hills, or trees, or faces. They are esteemed only because landscapes and men have to be made out of them. They are the stuff of which men and things are made; and their sole meaning to men, today, is this function of theirs; and that is the end of the matter.

In stating that Abstract Art died of acute boredom, I meant boredom on the part of both public and artist.The public got bored because these things meant nothing to them, and they only went to see them in the first instance because they made them laugh. After a bit they became a stale joke. The artists' boredom was of a more complicated order. I will endeavor to explain it.

The public reaction, or lack of reaction, counted for something. But economic considerations, or ridicule, have never stopped any man from pursuing a line of research which he felt would lead somewhere. Artists are just as susceptible to the appeal of novelty as the rest of men. Picasso jumps about so much because he gets bored very quickly. While the idea of a visual music was still a novelty, everything went swimmingly. But it turned out that the visual world could not be reduced to those terms, simply because it is there in front of us all the time, and is so much more interesting than the "abstract" volumes of our visual-musical world could ever be.

Picasso and his cubists recognized this by never departing from nature: they would distort and interpret it in the most violent manner, but all that they did started as a plate of apples upon their table, or as some bonhomme they had studied at first-hand (probably holding a guitar, or dressed as a harlequin). What they did was merely a very witty, geometric commentary upon an assemblage of objects, or a scene beneath their eyes. That of course was why in 1920 I attacked them as nature-mortists. I could not see why one should depart so far from nature if one did not depart altogether. And still, in a sense, I do not see why. When one has purged natural forms entirely of their organic or natural reference, and made abstract counters of them, they are in themselves very empty and dull. Their relations to each other may be interesting, in the abstract. But, visually, the whole set-up remains vacant and impoverished. For you have to empty a form so much in order to drain it of all natural reference.

If to escape from this, you blotch and pockmark your surfaces, as nature does, the result, like badly faked old furniture, has a bogus look. But the main difficulty is that it is as if you were living by yourself upon a small island, all the few trees, rocks and fauna of which you knew by heart. You can get terribly sick of the same old hypostasized tree, or the same little platonic brook.

Then with the purist abstractionist, nature is always lying in wait for him. In certain relations his synthetic shapes look like houses, in other relations they look like people, or like clouds. There is nothing in nature in the least like a Bach fugue. But the human eye has a different subject matter and a different function from that of the human ear. Without mixing nature in (as most of us ended by doing) your visual music is dull and monotonous. The "abstractist" comes to long for a big juicy trompe l'oeil, just as prohibition drove men to the bottle.

Abstract art had to be attempted; it had its bootleggers, too, namely the dealers. But as was suggested by the present writer in "The Caliph's Design," it is a (fantastic) branch of architecture, rather than anything else. Architecture having recovered and become reinvigorated, there is no further excuse for it.