You are using an outdated browser.
Please upgrade your browser
and improve your visit to our site.
Skip Navigation
New weapons, old feuds in south Sudan. 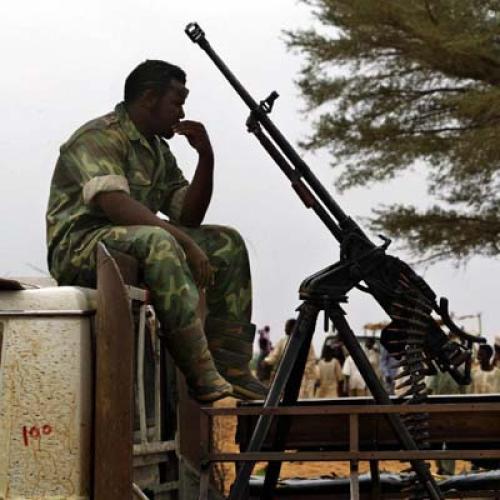 JUBA, THE SUDAN--Khali al-abidyakul al-abid—"Let the slave eat the slave," goes an old Sudanese saying from the 19th century, when Arab slave merchants dominated southern Sudan by pitting one black African tribe against another. Now Sudan's government has revived memories of that old slogan with its conduct in the country's six-year-old civil war. Caught up in geopolitical intrigue and tribal rivalries, and armed with modern weaponry, southern Sudan seems to be eating itself alive.

Sudan's civil war, which has killed hundreds of thousands through starvation and created some two million refugees, is usually portrayed as a conflict between the predominantly Arab and Muslim north and the black African, mostly Christian and animist, south. The many tribes of southern Sudan have indeed been waging a common war against northern political domination since 1983, when then-President Gaafar el-Nimeiry, a Muslim from northern Sudan, undertook a series of measures that effectively made southern Sudanese second-class citizens. Increasingly, however, these southern tribes have fallen to fighting among themselves. And instead of using spears and muskets, this time Sudanese are settling old scores with automatic weapons, SAM-7 missiles, land mines, and other armaments supplied by Libya and the United States—both jockeying for influence with the government—and Ethiopia, backer of the rebel Sudanese People's Liberation Army (SPLA).

The SPLA's strategy is to destroy the government's capacity to govern in the huge and already impoverished southern half of the country. It has succeeded in gaining control of most of the south, confining government troops and officials to a few remaining outposts like Juba, the provincial capital of southern Sudan, 800 miles south of Khartoum. But hunger and indiscipline among the SPLA's 30,000 mostly illiterate rank and file have led to widespread looting and pillaging, effectively destroying not only the government's ability to govern the region but the people's ability to live in it. The rebels, like the government, have used food as a weapon, destroying crops and then blocking humanitarian efforts to deliver famine relief. Juba itself was completely isolated for two months last fall after the rebels ambushed a food convoy. The people survived on a diet of boiled water lilies and roasted rats.

The government of Prime Minister Sadiq al-Mahdi, meanwhile, is waging a proxy war. In what looks like a repeat of the divide-and-rule strategy of the slave trading days, it has created tribal militias, providing high-powered weapons and ammunition to traditional ethnic rivals of Sudan's largest southern tribe, the Dinka, who predominate in the SPLA. These modern weapons, nominally provided for self-defense against the SPLA, have ratcheted up the stakes of age-old ethnic competitions over land and cattle—conflicts that until only a few years ago were waged with sticks and spears and settled through negotiation by tribal elders. Now they are waged with automatic assault rifles and hand grenades, in an escalating cycle of attack and revenge that has led some Sudanese to speak of the "Lebanonization" of southern Sudan.

Among the earliest southern tribes to be armed by the government were the Mondari, pastoral nomadic cattle herders like their Dinka neighbors, with similar physical features. They are exceptionally tall and thin, and pitch black, with decorative scars on their foreheads. The Mondari have a reputation as a warrior tribe. Even now, amid famine, what little food is available is said to go first not to the women and children but to the young Mondari men, the warriors, on whom the rest depend. And even now the men look fit. On Christmas Day the young Mondari men, having evidently set aside their automatic weapons, dressed in leopard skins and gaudy sashes and paraded through the streets of Juba waving flags, blowing whistles, chanting traditional African call-and-response holiday greetings, and staging wrestling matches in a downtown square.

Depending on who is reciting the history of what followed after the government armed the Mondari in 1983, the Mondari either raided neighboring Dinka for their cattle or resisted SPLA raids, and the fighting continued for two years. The Mondari finally retreated with their cattle to the outskirts of Juba, where they set up camp. In 1988 the SPLA attacked the camp and drove the Mondari further into town, to a ragged assemblage of green plastic tents and thatched-roof huts barely a mile from its center. So the Mondari, in spite of—and perhaps because of—their government-sponsored militia, have been twice displaced by the war.

Most of Juba's inhabitants are no strangers to war. It was here in this country's southernmost province of Equatoria that most of the fighting occurred in Sudan's earlier 17-year civil war, which began with independence from Britain and Egypt in 1955. That war went almost completely unnoticed in the West, though it cost an estimated 500,000 lives—ten times as many as the United States lost in Vietnam during roughly the same period. Then as now, hunger was the worst killer.

On quiet nights during the current dry season, when the rebel siege has eased, it's possible to share a meal in a lightless thatched-roof caf6 with middle-aged veterans of the old Anyanya guerrilla movement, which sought to liberate the south of Sudan and create a separate African nation. The 1972 Addis Ababa accord, which ended the 17-year war, established limited southern autonomy instead. These Equatorian Anyanya veterans will tell you that the SPLA is not much more than a Dinka tribal militia. They will say that the Equatorians like themselves initiated that earlier cam paign. The Dinka, they argue, formed the SPLA to fight the government only after the government threatened to diminish Dinka power by  ubdividing the south into three separate provinces, a move that seemed to benefit Equatorians. The Dinka, needless to say, tell it differently.

The irony is that most southerners readily identify with the cause of the SPLA. All share the ancient and deeply held grievances of the African south against the dominant Arab north. But from this vantage point the larger issues in the war seem increasingly remote. One hears a lot of talk about how there are "no good guys," in this war, that "both sides are to blame."

For nearly six years, the government's cynical strategy of divide and rule has, in effect, been a substitute for bargaining in good faith with the SPLA. Despite Khartoum's recent overtures to the SPLA, it's unlikely that any agreement will arrest southern Sudan's cycle of violence. Even if John Garang, the SPLA's leader, manages to come to terms with the government, it is doubtful that he or any other leader can control more than a limited number of the armed combatants. The forces of anarchy have taken on a momentum of their own.

Last Christmas Day, at least, Juba seemed momentarily to forget about the war. In the camps for displaced people, men, women, and children gathered on rows of log benches under plastic canopies and celebrated the holiday with remarkable cheer. But even as mass was being held in the Lologo camp on the outskirts of town, the singing was disrupted by the blast of an exploding land mine. SPLA rebels had entered the camp on Christmas Eve and kidnapped a dozen young women and boys. They had covered their tracks with mines and four people stepped on them the next day. All were killed. For a bemused Equatorian relief worker, the news seemed to capture the war in microcosm. "The government wants the people in the south to die," he said. "And the SPLA has done the government's job for them."

BILL BERKELEY is a New York-based journalist who has written frequently about Africa.