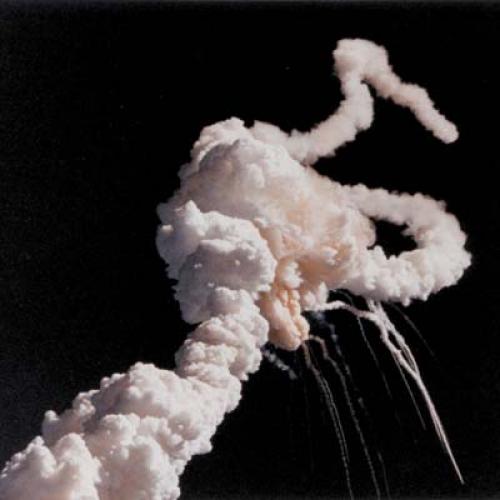 With an immediate concern for the feelings of the pupils in his charge, Mr. Charles Foley, the principal of Concord High School, asked the students to return to their classrooms and the reporters and cameramen to leave the building. In that local and exact response, he distinguished himself from the hollow emotions that television tried to arouse in the American people from the moment Challenger exploded and fell from the sky. For a nation, rightly, a president speaks. Like presidents before him at such moments, President Reagan was adequate to the occasion and humble in his address. But as if that was not enough, all day the network anchormen assumed the duty of telling us what to feel. The event, the disaster, the tragedy, the grief: one by one they were transformed, beyond their measure, beyond their place, and above all, beyond the point where we could recognize ourselves.

Again and again the comparison was made to Dallas in 1963 and Memphis in 1968. But the explosion in the sky bore little resemblance to those tragedies. In Dallas and Memphis there were assassinations, and the acts were deliberate. Above Cape Canaveral there was an accident, a mechanical failure, or at worst (we may never know) a human error. In Dallas and Memphis the nation lost two unusual and significant leaders; in Challenger we lost five American men and two American women who might live next door. There was, perhaps, a common sense of loss uniting all three: in each case, a nation's hope for its future was dimmed.

But what the assassinations and the explosion truly had in common was the presence of the camera and the swarm of anchormen. They must spend a day inviting us to the titillation of watching a toy explode in the sky. That is what it became: television had launched a toy and made it explode—before our very eyes. The comparison to Dallas was made, in some cases explicitly, to exalt television as the legitimate creator of a common national emotion. Everything led to Koppel, and once he told us what to feel, we could go to bed secure in our emotions.

HEROES OF THE HEAVENS screamed the New York Post the next morning. Television had already spent a day making heroes out of five men and a woman doing their job, at a risk they knew and accepted, and one schoolteacher who had eagerly sought to join them in a mission she understood, again knowing and accepting the risk. It is brave to travel into space, and it is daring; and it is still something like a human miracle that we are up and out there at all. The bravery, the daring, the endeavor benefit us when we are reminded of them. But they do not, singly or together, make heroes. A soldier is brave and daring to go into battle; he is not by that reason a hero. He becomes a hero when by some conspicuous act he takes a risk that, more likely than not, will demand the sacrifice of his life.

It was not heroism that was at issue this time; it was symbolism. Challenger carried with it a human hope and yearning that is as old as the ages. After 25 shuttles we have been reminded, and some may have discovered for the first time, that what may have come to seem routine, scientific, technological in the astronauts is exactly what gives them their meaning in our place and time. That was what sending an ordinary citizen up into space was meant to recapture. And that excitement and wonder were precisely what Christa McAuliffe conveyed; those qualities came through not because of the press hype, but in spite of it.

The more obsessively the media watched the shuttle explode and the faces crumble, the less they saw. The world may be transfixed by disaster, but as Auden explained, it is not transformed.

In Brueghel's Icarus, for instance: how everything turns away Quite leisurely from the disaster; the ploughman may Have heard a splash, the forsaken cry. But for him it was not an important failure; the sun shone As it had to on the white legs disappearing into the green Water; and the amazing delicate ship that must have seen Something amazing, a boy falling out of the sky. Had somewhere to get to and sailed calmly on.

In that, which might almost be about Challenger, Auden (and Brueghel) had the perspective right: he described the suffering, and he enabled us to recognize ourselves. The media once again got it wrong.