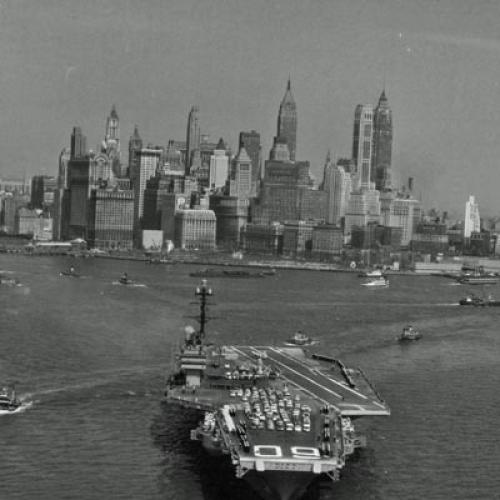 Perhaps the most fruitful way of looking at Max Lerner’s America as a Civilization, is to read it not against de Tocqueville or Bryce, as initial reviewers have, but against the book which consciously or otherwiseLerner was trying to take the measure of, Harold Laski’s The American Democracy, which was published just ten years ago.

The surface similarities are striking: both are big books; Lerner’s is 1036 pages, Laski’s, in smaller type, 783 pages. There is an extraordinary congruence in topic: Laski begins with the traditions of America, deals with education, culture, business enterprise, the political system, America as a world power and ends with Americanism as a principle of civilization, Lerner, too, begins with tradition, continues with the idea of America as a civilization, covers the same ground as Laski, although in genuflection to newer concerns adds two chapters on parent child relations and on American character, and ends with America as a world power.

Politically and temperamentally the two have had much in common. Both are prolific writers whose signatures are primarily in the phrases they formulated for the liberal middle-class intelligentsia of the thirties and forties (“the revolution of our time;” “ideas are weapons”). Both were pipers of the popular front ideology but became, Lerner more astringently, anti-Stalinist. Both have been open, gregarious, buoyant, academic yet engage, interested in influencing the young and shaping the political culture yet eschewing office (Laski could easily have become a Labour MP) or organizational commitment (Lerner has shied away from positions in A.D.A.).

Both as Jews were aware of their distance from the established idols of society. Both have been highly self-conscious of their varied aspirations and roles (Laski more so, so we can see from his posturings in his letters to Holmes). Both felt that they were summing up a generation. Both books were a decade in the writings and were published a decade apart. And it is that decade which marks the difference.

Laski was trying to write a Marxist analysis of America. For all his awareness of the complexities of the American past, his picture of the contemporary scene was cast in a rigid bedframe. America was a political democracy, but only of the middle class “which assumes though it does not announce, the authority of wealth,” and is careful not to “jeopardize the claims that the men of property invariably put forward as the boundaries beyond which democracy may not pass.” Nor could the political democracy “conceal the facts that [its forms were based on an economic foundation which was growing oligarchical in character,” while the courts served to “act as a brake on the democratic habits of the legislature.” His conclusion was dark, “The spirit of America in the nineteen forties . . . [with] a growth of anti-semitism and of bitter hostility to the Negro advance” must give any “honest observer . . , some hesitation about its outcome.”

This was Laski in 1947, after 14 years of the New Deal and Fair Deal. He could hold these views, knowing as much as he did about the details of life in the United States, because of the conviction, shaped by a Marxist view of social evolution, “that the history of the United States, would, despite everything,follow the general pattern of capitalist democracy in Europe.” How reckless the unqualified phrase, “despite everything,” yet this conviction was held in unwavering form by most of the leftwing intelligentsia in the thirties and forties and is one of the reasons why the “left” so consistently misinterpreted American political developments.

In reading Lerner, one is struck immediately by the difference in key terms: the language is no longer Marx, but cultural anthropology cum Jungian and a nervous sociological idiom. Where for Laski the US comes into perspective only through socio-economic forces, vested interests and power, in Lerner there is myth, norms, character, culture and personality. Where Laski felt that we would recapitulate the fate of Europe, for Lerner there was the “psychic necessity for rejecting Europe” arising out of (with reference to The Golden Bough) “the symbolic slaying of the father,” Frustration for Laski was a socio-political problem because “the ruling class of the United States employed the traditional American spirit to prevent the adaptation of American life to the facts it encountered,” {i.e. the need for a socialist solution to economic difficulties). For Lerner, frustration is a sociopsychological drama, induced by success, the conflicts in values and the inability of individuals rising in status to learn new styles of life.

The contrasts are most extreme in their key image of Americanism. There is a malaise in America, said Laski, which was responsible for the “European escapism” of Henry James, the “religious escapism” of Willa Cather, the “provocative defiance” of Tate and Ransom (i.e. the Southern agrarians), and that malaise arises out of Americanism, a chauvinistic doctrine fostered by the industrial oligarchy to hide if not corrupt “the failure [in America] of the historicdrive towards the egalitarian society.” The American, says Lerner in a rapturous paragraph, is the modern man par excellence, restless, mobile, a man of energy, mastery and power:

Above all he is the man for whom the walls have broken down. He is the double figure in Marlowe of Tamerlane and Dr. Faustus, the one sweeping like a footloose barbarian across the plains to overleap the barriers of early civilization, the other breaking the taboos against knowledge and experience, even at the cost of his soul. Thus the great themes of the Renaissance and Reformation are fulfilled in the American as the archetypical modern man—the discovery of new areas, the charting of skies, the lure of power, the realization of self in works, the magic of science, the consciousness of the individual, the sense of the unity of history. These themes, says Lerner, following Wyndham Lewis, plus the “logic” of its geography and history, will make America “the epitome of all societies.”

Clearly the picture sketched by Laski is out of focus today. Business is less pecuniary and acquisitive, although more manipulative and security-conscious; it has achieved a certain social-mindedness and become decent, at least to its “exempt” personnel (a curious legal term signifying those who are exempt from unions under the Taft-Hartley law, or to whom the overtime provisions of the Walsh-Healcy act do not apply). The social strains of the last ten years have not been over property but over status: McCarthy was backed not by corporate big business but by a curious mixture of the new rich and various ethnic groups whose unity lay in a hate of intellectualism. The traditional conservatives proved to be the strongest bulwark against McCarthy while the courts have upheld the constitutional spirit against the “democratic” legislatures.

Whether the US, however, will “epitomize” all other societies is a moot point. What is startling is that in the next half century, for the first time in human history, a common technological foundation will underlie all cultures. Yet this does not mean that all societies will be alike. Despite certain “logics” which follow from the fact of industrialization (technical education, new professional classes, the increase in white collar occupations) each society is sufficiently singular in its cultural traditions for the profiles of these countries to remain markedly different. And it is this cultural “superstructure,” in fact, which belied Laski’s gloomy predictions.

The remarkable fact about the United States—and the one which makes it difficult for anyone to do justice to it—is that ours is probably the first-large scale society to have “built” change and innovation into the culture. It is this, perhaps, which has allowed us to absorb the fantastic number of social upheavals whichfollowed the break-up of family capitalism and the rise of the corporation, the abandonment of old frugalities and the spread of prodigal consumption, the centralizing of political decision-making and the assumptions of world power responsibility, while older societies, such as Germany, were overwhelmed by status and political anxieties which came in the wake of change. It is significant, perhaps, that the major theorists of mass society were German—Karl Mannheim, Emil Lederer and Hannah Arendt—and derived their analysis from the breakdown of traditional political structures in Germany under mass democratization. Yet here, despite the erosion of family and community ties, we have not experienced the European sturms und drangs.

Any attempt, then, to encompass the variety which is America, must not only describe such changes, but find some scheme or method which will give some coherence to this fluidity and change.

This is the first section of a two-part essay, to be completed next week.