You are using an outdated browser.
Please upgrade your browser
and improve your visit to our site.
Skip Navigation
On the Hill. 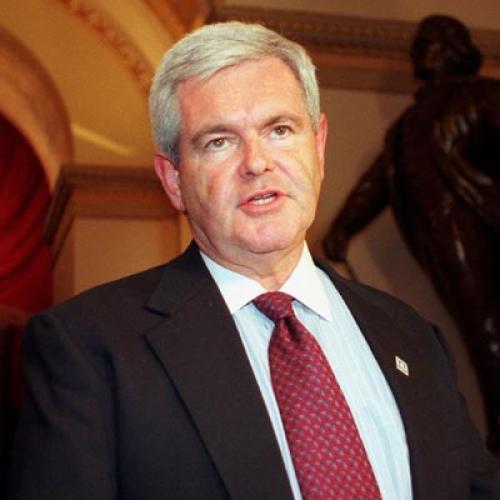 Last month, after outraged moderates cornered him over a harsh anti-regulatory bill, Newt Gingrich bowed to their pleas and yanked it off the floor. A few days later a different group, this time angry hard-core freshmen, surrounded Majority Leader Dick Armey in his office. Fed up with the Speaker’s bleeding-heart betrayals, they sought a new commander for the revolution. “The truth is,” freshman Representative Steve Largent said later, “Newt is no longer the polar right.”

The incidents underscore one of the strangest turnabouts on Capitol Hill: Newt Gingrich, the man who led the seventy-three freshmen into battle only a year ago, and is still regarded as an extremist by much of the public, has emerged as a hero of moderate Republicans and the bane of hard-line conservatives. “Since he became Speaker, Newt has become hostage of a few moderates, at the expense of the rest of the conference,” snapped one angry GOPer. Hard-core freshmen, who once hung on the Speaker’s every word, now dismiss his fiery rhetoric as just that—rhetoric. “He says things to the right of me,” complains freshman class vice president Mark Souder, “but then moves halfway around the world.”

Moderates like where Gingrich has ended up. The former bomb thrower has embraced Bob Dole, a man he once denounced as the tax collector for the welfare state; forced his unruly freshmen to reopen the federal government; supported the pro-choice General Colin Powell as a possible Republican vice president; defended freedom of expression in cyberspace; fought to save endangered species; flirted with a budget deal with President Clinton; and opposed gutting affirmative action.

Behind these seemingly mainstream stances is the Speaker’s peculiar “progressive” conservatism—an amalgam of free-market principles, states’ rights and technological utopianism. While Gingrich looks optimistically to the future, many social conservatives pine for the past. The two sides have increasingly clashed, most notably on censoring the Internet. “Newt thought conservatives were spitting against the wind of history,” says Souder. “But at least I could say I went down spitting.”

As campaign ’96 rolls around, Democrats are gleefully fanning Newt’s militant public image. But, in their more reflective moments, even they admit that he is less ideologically driven than many in his party. “He never was a true conservative,” says Representative Neil Abercrombie, a long-haired liberal from Hawaii. “I don’t know why people ever got that idea. They confused opposition with conservatism and ambition with conservatism.”

Most of Gingrich’s moderate positions are rooted in a realpolitik that transcends ideology. “Newt is a conservative driven by conservative principles,” says his spokesman, Tony Blankley, “but he is practical enough to solve any problem.” Gingrich’s problem in the minority was how to gain a majority; now it is how to maintain one. As a result, he has consistently placated the party’s thirty or so moderates, who often enjoy more leverage than their conservative counterparts because they may, in a pinch, vote with the opposition. He conspicuously excluded divisive social issues such as abortion and school prayer from the Contract with America. And, since taking power, he has strategically placed moderates like New York’s Sherwood Boehlert at the helm of several of his new task forces.

Quintessential New England moderate Chris Shays, a former Gingrich foe, now hails him, without a hint of irony, as “one of the finest thinkers in Congress, a true patriot.” But the flip side is that Gingrich has begun to lose his once-unassailable conservative base. Most hard-liners celebrated when Gingrich announced last month that he would no longer micromanage the House in order to concentrate on the GOP’s message. Hard-liners had harrumphed because, while Armey has always run the day-to-day operations of the House, moderates had increasingly circumvented the more doctrinaire majority leader during contentious battles, pleading their case directly to Gingrich. After deficit hawks eliminated housing money for aids victims last year, some thirty moderates marched into Gingrich’s office. “Afterwards, most of the funding was reinstated,” says moderate Representative Rick Lazio. “I’d say we won.”

It is such caves that have led previously ardent followers to question Gingrich’s conservative credentials. Representative Tom Coburn, head of the family caucus, scoffs at Gingrich’s self-described “progressive” conservatism: “Frankly, I don’t know what that is.”

Though many freshmen have been stunned by Gingrich’s moderation, Republicans who have known the Speaker for years are less surprised. After all, the pear-shaped professor was once a Rockefeller Republican, crusading for civil rights. “The moderates like Newt,” says Resources Chairman Don Young, a fiscal conservative, “because Newt has always been a moderate.” Many moderates supported Gingrich’s bid for minority whip in 1989 over Ed Madigan, a fellow centrist. In part, they knew he could help them return to the majority, but they were also able to distinguish between Gingrich’s guerrilla tactics and ideology. “I was a backbencher who knew that in order to be effective,” Gingrich confessed to Atlanta Magazine in 1990, “you had to use certain techniques.”

Newt the Speaker no longer throws bombs the way he did as a member of the opposition. This is why, according to many aides, Gingrich pursued budget negotiations with Clinton last fall, even after Dole, the famed deal maker, had decided that long-winded soirees at the White House were counterproductive. What has undermined the Speaker is his inability to exploit his own moderate positions: most Americans still see him as an ultra right-winger, and his approval ratings are as low as Richard Nixon’s at the height of Watergate.

This public unpopularity has ironically strengthened the House radicals, who seem prepared, if need be, to jettison their former guru. “There are thirty people other than just the Speaker who have the leadership ability and confidence to hold the conference together,” says Coburn. In contrast, Shays, the Connecticut moderate, says, “It’s a little scary, but I think Newt is indispensable.”

For the moment, Gingrich still maintains the trust of most in the party. He remains their best communicator and fund-raiser. And moderates—in a panic over Armey’s recent ascension—believe the voluble Speaker will still come to their rescue. After Gingrich’s intervention on the regulatory bill, moderate Representative Ray LaHood said happily, “Gingrich is still calling the shots.”

But with Gingrich’s former supporters now occupying his infamous back bench, the Speaker is already showing signs of retreat. To appease the true believers, last month he scheduled a vote, after nearly a year of delay, on repealing the assault weapons ban. And, with the fall election closing in and Armey prepared to step into the breach, Gingrich may soon be forced to become the one thing he has never been in his heart: an extremist.

David Grann is the executive editor of The Hill.