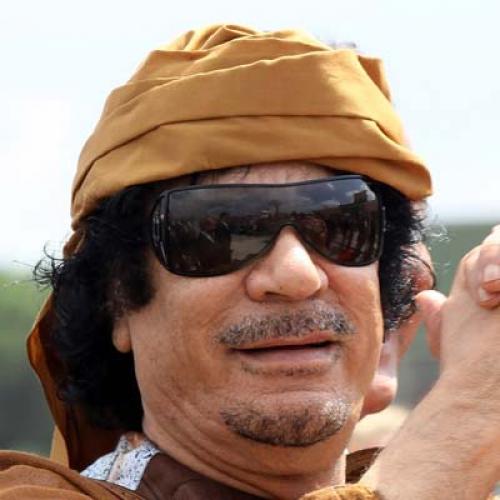 In the Middle East, as in much of the world, if a ruler can ward off the assassin’s hand, he need  not govern effectively or justly to remain in power. But the career of Colonel Muammar al-Qaddafi demonstrates that the key to power in a place like Libya is not just brute force. It is the ability to mesmerize the mob. The mob is fickle, easily roused and easily disenchanted. With minimum expectations of what life might otherwise offer in a rationally organized economy and free polity, it feeds on slogans and fantasies. Still, it takes skill for a person to sate a mob for 17 years on such an insubstantial diet. And Qaddafi, eyes wild with rage and given to threnodic oratory, has that special demonic knack that has enabled some other tyrants of our era (not all in the Middle East, to be sure) to keep the people in their thrall.

For the dictator in Tripoli, the armed doctrine is hatred—hatred of the West, hatred of the Jews, and hatred of the United States. This message is also heard elsewhere in the Middle East, and sometimes with equal virulence. What differentiates Qaddafi from his Middle East peers is not the fact that he takes such rhetoric as sanction for terror. After all, Hafez al-Assad of Syria is surely responsible for e death of many more Americans and other innocents than Qaddafi is.

But there are two demarcating differences. The first is that Qaddafi has never pretended to statesmanship. He has never been Jimmy Carter’s favorite Middle East politician (though he came close; he was Billy’s). Nor has he, like Assad, ever had friends from time to time in the Reagan administration. The second difference is that Qaddafi, unlike Assad, is not under the special protection of the Soviet Union. When Qaddafi tried to claim that protection last week in order to deflect what seemed like an inevitable U.S. retaliation for his countless provocations, Georgi Arbatov, the authoritative Soviet voice on relations with Washington, went on American television to say that the Libyan dictator has no such protection. In the days before the American attack, Russian ships apparently also discreetly left Libyan waters. All that was left to the scenario were the bombs themselves.

Oh yes. Also our European allies. Except for the British, they did not behave as President Reagan would have liked. The French—and the Spaniards, our latest NATO ally—did not assent to the raids, and forced our aircraft originating in Britain into a humiliating flight plan that added 1,200 dangerous nautical miles to the mission, each way. To compensate for this pusillanimity. President Mitterrand “affirmed France’s and my own determination to continue fighting relentlessly against terrorism.” The Italians, who’d foolishly behaved for years as if the terrorists they propitiated would exempt their citizens from massacres, also affirmed their relentless determination.

In trying to understand the fecklessness of our European partners in democracy, we might pause to remember that it is now 30 years since Suez, when, in a fit of misplaced moralism, John Foster Dulles treacherously undercut our French and British allies at a critical moment in their histories. With this began the futile American courtship of Gamal Abdel Nasser, whose yoke the Egyptian people had to bear for another decade and a half. Had we not panicked the two European powers into retreat, subsequent developments in the Middle East would have been far more peaceful, and far more conducive to orderly modernization. Moreover, we would have had allies who could trust us—and whom, as a consequence, we could trust.

One reason Britain gave tactical and moral support for the Libyan operation is that London has experienced particularly traumatic instances of Libyan terrorism. In addition, there sits at 10 Downing Street an uncharacteristic Tory serendipitously attuned to the temperament of the man who sits in the White House. But even this would not have sufficed had the United States not supported Britain in its Falklands war against Argentina. An alliance is a two-way transaction or it is not an alliance at all.

Notwithstanding their churlishness about U.S. military action against Libya, it was precisely this action that finally pushed the European Economic Community countries into taking limited measures against Libya they should have taken years ago. The “clear consensus” against terrorism that the Italian prime minister’s adviser on foreign policy said was “developing in Europe” was a consensus on timid steps. These amount to putting some constraints on the number of people attached to Libya’s so-called People’s Bureaus, where much of the traffic in terrorist arms and passports has been carried out.

It is too early at this writing to tell what concrete effect the raids will have on Qaddafi’s behavior.  It took a visiting professor of government at Harvard to observe, as the Boston Globe reported, that “Qaddafi may lie low for a while but he may not.” One anxiety about President Reagan’s policy that we share is whether a great power should mobilize so much emotional energy and military force against someone who is after all nothing more than a tin-pot or, to put it more accurately, an oil-barrel dictator, and yet still permit him to remain in power.

But an important principle has been established: American lives cannot be taken without cost. That is, in fact, a principle of justice. For the president now has behind him, as he does not have for any other active aspect of his foreign policy, a united people. What we have done once in Libya we can do again, and elsewhere too. This may even give pause to Moscow’s terrorist clients. Grenada aside, Reagan never has had such unity as a political asset in his dealings with the Soviet Union or with their various proxies in the Middle East.

The reflexive nay-sayers in the U.S. are now prophesying a surge in Qaddafi’s prestige among the mob that is the base of his power. But how do they know its mercurial ways? As we go to press, there are sketchy reports of fighting in the streets of Tripoli. Even in Libya, a state but hardly a nation, there may be some other colonel or perhaps even a dissenting politician who can persuade the people that a small country, however bloated its recent oil revenues and its visions of grandeur and revenge, cannot really wage war against the United States of America. And then maybe the loyalty of the mob will be lost even to Qaddafi.