You are using an outdated browser.
Please upgrade your browser
and improve your visit to our site.
Skip Navigation
An Interview With Qaddafi 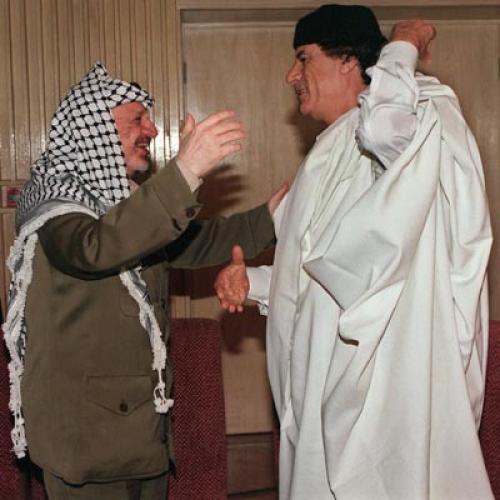 President Bill Clinton and Jews have an unlikely new champion: Colonel Muammar al-Qaddafi of Libya. To hear him tell it, the fiercely anti-American and anti-Israeli leader who has made himself an international pariah through his unwavering support of terrorism around the world is intent on dramatically changing his ways.

"We were happy about Bill Clinton's success. We will not create any problems for him," the quixotic leader told me in an interview last month in his untraditional bedouin tent pitched in the center of the Bab el Aziziya barracks in Tripoli. "We consider him the savior of the new world, the United States and the Western world." As for Israel, he said: "Were it not for the problem of Palestine, I would be the first to defend the Jews of the world."

In an astonishing series of about-faces during the ninety-minute meeting, Qaddafi said that Tripoli would soon extend an invitation to Jewish leaders, including some from Israel, to a planned conference of the three major monotheistic faiths; that he would permit a group of Libyan Muslims to visit holy shrines in Jerusalem; and that he would soon put in place a 1970 law providing compensation to Italians and Jews who left property in Libya when they fled after the 1967 Arab-Israeli war.

He insisted that Libya had closed camps that the West has alleged are terrorist-training facilities, and he invited United Nations inspectors to visit any site they suspect of such activity. He vowed that Libya would never develop or seek to purchase nuclear weapons -- both of which it has previously attempted -- and that it would never use weapons of mass destruction against Israel. He denounced Islamic militants, whom he branded "mad dogs and terrorists" who act in ways contrary to Islam, and called for close cooperation between Arab and Western countries to fight them.

In a subsequent interview, Libyan Foreign Minister Omar Montaser indicated that Libya was prepared to recognize and make peace with Israel. Libya, he noted, was already involved indirectly in the current Arab-Israeli peace talks through the participation of a Maghreb Union representative in the multilateral sessions of the talks. And Tripoli, he added, would continue to pursue its goal of federation or union with Egypt. "It goes without saying that we would recognize any agreements Egypt has signed with third parties," he said, alluding to Egypt's peace agreement with Israel.

What is going on here? Why has the 50-year-old dictator who has repeatedly vowed that Israel and its American sponsor will be savagely routed from the map of the Middle East suddenly recanted? The answer may lie in his growing frustration at his sense of isolation. u.n. sanctions against Libya, imposed after Qaddafi refused to surrender two Libyan agents accused of the 1988 bombing of Pan Am Flight 103 over Lockerbie, Scotland, have left him severed from the rest of the world. Since April 1992 Libya has endured a cutoff of international air travel to and from the country, an arms embargo and reductions in the already low level of diplomatic contact. In February the sanctions were tightened further (though they still don't include an oil embargo, which Washington favors). Still, Qaddafi refuses to surrender the alleged bombers for trial in the United States or Scotland.

Seasoned Qaddafi watchers see his latest overtures as an effort to circumvent the impasse on the Lockerbie affair by demonstrating remarkable flexibility on other issues of American concern: the security of Israel, preventing Islamic radicals from destabilizing friendly regimes and the proliferation of weapons of mass destruction. So far, the Israeli and American responses have been muted. The most recent statement of U.S. policy toward Libya reiterated Washington's view that Libya should continue to be ostracized. The u.n. has declined to send inspectors to alleged training sites. And even Israeli Foreign Minister Shimon Peres, who has never seen a diplomatic opening he didn't want to test, has expressed skepticism about Qaddafi's gestures.

Qaddafi's new stance leaves Clinton with a choice. He can either cling to the hard-line policy of the Reagan and Bush administrations or try a new tack. During the campaign, Clinton promised the families of the victims of Pan Am 103 that American policy would not change until and unless Qaddafi surrendered the two agents. Clinton seems intent on keeping his word for political reasons and in order to discourage terrorism here and abroad.

But a continuation of the current policy is unlikely to accomplish that; there was no indication from either Qaddafi or his senior aides that continued ostracism will result in the surrender of the two men. Quite the contrary. Libyan and foreign officials agree that Qaddafi will not give them up, both for domestic political reasons (one of the agents comes from his deputy's powerful tribe) and because he fears the impact of such a stark loss of face. And while Libyans are paying higher prices for goods, the sanctions are not bringing the country to its knees.

What can the United States do? One option is to step up the sanctions, hoping that this might force Libya to give up the two alleged bombers. But only an embargo on Libyan oil is likely to inflict true economic pain on Libya, and European allies have already informed Clinton that they will not support this. So no realistic possibility exists of increasing economic pressure through sanctions.

Another option is to explore the possibility that Qaddafi has changed his line. The Clinton administration has not been persuaded that Qaddafi's gestures are anything but theatrics and tactics. It notes that while Abu Nidal may no longer be in Tripoli, members of his group are still there. And that Qaddafi's outreach to terrorists becomes more intense whenever there is a danger that the United States may move for stronger sanctions. The administration is concerned that initiating a diplomatic relationship with Qaddafi might suggest that the United States is weakening its commitment to fight terrorism. Finally, it doesn't believe that Qaddafi is capable of changing. "When Hafez el-Assad gives his word, he sticks to it," a senior official said, referring to the hard-line Syrian leader who has long supported terrorist groups but is now engaged in peace talks with Israel. "There is no such pattern of consistency or stability with Qaddafi."

However, the administration will never know whether Qaddafi is serious unless it tests his intentions. The foreign policy choice seems to be between pressing ahead on Lockerbie or probing Qaddafi's opening. But, in fact, that is a false choice. For it should be possible for Clinton to approach Qaddafi without compromising his insistence on getting satisfaction on Lockerbie.

For example, the United States could pressure Qaddafi to make good on his promises and end his support of terrorism and its relentless quest for weapons. Clinton could also pressure Libya for indirect Libyan support for Egypt. More than a million Egyptian workers are now employed in agriculture, commerce and construction in Libya. Egypt's political stability may well depend in part on a continuation of the remittances from them. Egypt would surely not be strengthened, as President Hosni Mubarak recently warned Clinton, by the precipitous return of such workers, many of whom were ejected from Iraq during and after the Gulf war. And it could be very helpful to have Libyan cooperation both in the Arab-Israeli peace process and in efforts to stop the spread of the Islamic fundamentalism that now threatens Egypt and other friendly regimes in the region.

Indeed, Libya is in a position to be helpful to American goals in the Middle East should Qaddafi choose to be so. Either the United States can continue to pursue a policy that squeezes Qaddafi but is unlikely to press him hard enough to result in the return of the two Libyan agents or, while continuing to insist on their surrender, it can begin to test Qaddafi's ostensible desire to be no longer part of the problem, but part of the solution.

JUDITH MILLER, a writer for The New York Times, is on leave at the Twentieth Century Fund.