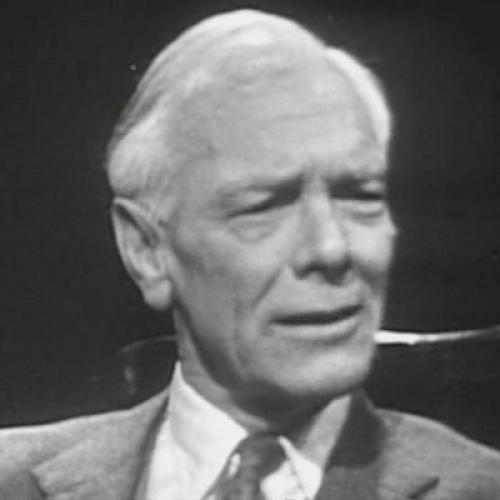 The dust jacket of Mr. F. J. Stopp’s study of Evelyn Waugh shows his subject, dressed in check tweeds, a large, unlighted cigar in his hand, and leaning over a gate inscribed: “Entrée Interdite aux Promeneurs.” This portrait is by Cecil Beaton, who specializes in photographic studies of the royal family. It conveys the whole irony and poignancy of Mr. Waugh’s life out of which his writings have come—the notice in French on the gate of what is supposed to be an English country house, itself along with Mr. Waugh’s singular fancy dress serving to draw attention to him when, according to Mr. Stopp’s and his own account, one of his major objects in life is to avoid being intruded upon or noticed.

My own acquaintance with Mr. Waugh is slight. The last time I saw him was at a wedding. I am no expert on wedding attire, but his seemed unusual. A tall black top hat, I thought funereal in character, provided an additional bizarre touch. He made considerable play with an old-fashioned Victorian ear trumpet, though whether for use or ostentation I cannot say. Occasionally he seemed to head in my direction, almost to orbit round me, but no trace of recognition appeared on his large, rubicund countenance. I felt no particular desire to be recognized by him, but these strange gyrations struck me as odd. In any case, on the few occasions that I have been on speaking terms with Mr. Waugh, I have formed the impression that he does not like me.

Usually, such antagonisms are mutual. I cannot, however, say that I reciprocate Mr. Waugh’s dislike. There is, to me, something oddly sympathetic about this professional eccentric. I admire the bizarre, though none-the-less often highly effective, protests he has made against the times in which we both live. I once saw him at Brighton, on this occasion attired in an enormous overcoat and grey bowler hat. He was making his way alone on to the pier. I was tempted to follow him and see whether it was the machines—“What the Butler Saw,” or some other—which attracted him thither, or whether he just went to the end to stare for a while out to sea. Despite his bulk and peculiar accoutrements, he had, I thought, an air almost of sanctity. The fool who persists in his folly becomes wise, Blake wrote. In this sense at least, Mr. Waugh may be accounted wise. Most of us, in the pursuit of folly, at a certain point prudently draw back. Mr. Waugh has persisted to the end. He has fought the good fight, if only with bladders and in the setting of a harlequinade.

Mr. Stopp’s study is painstaking, sympathetic and occasionally illuminating. He suffers, however, under the disability that he has only felt able to offer serious criticism in the words of others. His own attitude is too uniformly approving to be interesting. Also, alas, he notably lacks Mr. Waugh’s gift for the terse ironical phrase, the sharp, icy comment.

He is deeply serious, if not solemn, and has that curious convoluted way of writing which life at a university (in his case, Cambridge) seems so often to inculcate. Mr. Waugh has long passed the time when he needs an apologist. He has, in any case, been most ardently his own. And, in his last work, The Ordeal of Gilbert Pinfold, a discerning reader may find out a great deal more about him than most authors have disclosed about themselves. Mr. Stopp could scarcely have hoped to add to this.

His Evelyn Waugh is divided into two parts, the first biographical, the second an analysis of Mr. Waugh’s works. The biographical section takes us rather sketchily from Mr. Waugh’s childhood in a prosperous London suburb, Golder’s Green, the son of Arthur Waugh, for many years head of the publishing firm of Chapman and Hall, to his time at Lancing, where he began to emerge as a “character,” and distinguished himself at the school debating society. Mr. Stopp adds, rather naively, that the Headmaster’s House, at which Mr. Waugh was, had special connections with Eton, and that this may account for Mr. Waugh’s subsequent large acquaintanceship with Etonians. I can think of other explanations.

Mr. Waugh went on to Hertford College, Oxford, where he obtained a history scholarship, and there became an eminent figure among the group of aesthetes whose leader and chronicler was Harold Acton. A portrait by Henry Lamb belonging to this period bears out Harold Acton’s description of him as a prancing faun, thinly disguised by conventional attire. His wide-apart eyes, always ready to be startled under raised eyebrows, the curved sensual lips, the hyacinthine locks of hair, I had seen in marble and bronze at Naples, in the Vatican Museum, and on fountainheads all over Italy.

He neglected to take his degree, though he obtained a third-class in his finals. After Oxford, he was at a loose-ends, did a bit of preparatory school teaching (resulting later in Decline and Fall), tried his hand at carpentry, and, after his first marriage, began to write. His marriage was a failure, and he spent most of the remaining years before the outbreak of the 1939-45 war in travelling and writing travel books.

With great gallantry and persistence, although by this time 37, he managed to become a combatant soldier, and was with the Royal Marine Commandos in North Africa. Then he transferred to the Blues (the Royal Horse Guards), and, by one of life’s little ironies, was given indefinite leave of absence to write a book—Brideshead Revisited. From this compulsory retirement, he was rescued by Mr. Randolph Churchill, with whom he joined Fitzroy Maclean’s Military Mission in Yugoslavia. It was during this period that he first elaborated his interesting theory that Marshal Tito is, in fact, a woman. I caught a glimpse of him in the war, in Algiers, at a picnic party given by the Duff Coopers. He seemed, I thought, somewhat bemused and melancholy. His uniform, though exact, somehow gave the impression of not quite belonging to him. He looked, I decided, like a letter delivered to the wrong address.

In 1930, he had been received into the Roman Catholic Church, and after the war married into a delightful family of that faith, the Herberts. Thenceforth, he settled down to elaborate his impersonation of a crusty old country gentleman, collecting the requisite properties, both personal and household, and occasionally appearing in London in this role. Mr. J. B. Priestley and others have complained about the impersonation on the ground that the writer has been suffocated by the elaborate superstructure it has required. This seems to me absurd for two reasons—firstly, that Mr. Waugh remains an excellent writer, probably the most accomplished today in the English language, and, secondly, that his impersonation of a country gentleman is as integral a part of his writing as was George Orwell’s equally absurd converse impersonation of a down-and-out.

An interesting comparison could be made between these two. Whereas Mr. Waugh considers it “common” to pile plates after a meal, Orwell thought it “unproletarian” to drink in a saloon bar; whereas Mr. Waugh’s wardrobe is based on sporting prints of the late Nineteenth Century, Orwell’s followed the general lines of a workman in Punch jokes of the same period. If Orwell had not been able to convince himself that he was once down and out in Paris, and to dress and play the part, however imperfectly, the probability is that he would never have written Animal Farm or 1984. In the same way, Mr. Waugh’s masquerade has been essential to his work. Without it we might well have lacked his delightful comedies, in the Wodehouse manner (though Wodehouse with a decided dash of vinegar), that little masterpiece. The Loved One, as well as Brideshead Revisited, his books on the war, and,finally, Pinfold.

Precisely the same comment may be made on Mr. Waugh’s occasional political attitudes, which some have found offensive. Peppery old gentlemen living in the country, and needing ear-trumpets to hear what is said to them, are naturally pretty antidiluvian in their ideas. The Times is too Red for them, modern Toryism is little better than Bolshevism, and if they have occasionally heard the radio playing in the servants’ hall, television is something they just do not know about. So it must be with Mr. Waugh, though, according to Mr. Stopp, acute boredom often induces him to go off to the local cinema in the afternoon. Again, it is an infinitely touching picture —the grey bowler perched on the large head, the defiantly “loud” country suit, the pony-trap harnessed and whip cracked. But to go where? To the local Odeon to see Gary Cooper. “World, World; Oh! World,” as Lear remarked in not wholly dissimilar circumstances.

Mr. Waugh would, in any case, accept what he supposed to be the political attitudes which went with his Roman Catholicism. For instance, he would feel bound to approve of Franco quite irrespective of any private distaste he might have for the Franco regime. He has labored hard to make himself into a conformist, though his conformism is a Do It Yourself brand of his own. Thus, as a war-time soldier, his object was to submerge himself in smart regimental life. The novelist and gentleman must give way to the officer and gentleman. This, of course, did not make for popularity in the mess. His fellow-officers wanted to be diverted by the author of Vile Bodies, not confronted with a slightly grotesque, aging version of themselves. They expected him to be funny and unusual, not taciturn and sullenly laboring to be usual. As is clear from his two novels Men at Arms and Officers and Gentlemen, the Pinfold voices told Mr. Waugh this at the time —which must have made his suffering all the greater. He bore it, as always, with fortitude.

Mr. Stopp is puzzled by the great popularity of Mr. Waugh’s novels—especially, of Brideshead Revisited—in the United States. This is the only book by Mr. Waugh I have never been able to get through. It seems to me to be tedious and rather foolish. On the other hand, I find no difficulty in understanding why its American edition should have sold 700,000 copies. Its success, surely, is exactly comparable with that of My Fair Lady. Indeed, it might well have been called My Fair Gentleman. It sustains the illusion, especially dear nowadays to many Americans, that the old familiar social landmarks are still extant in England. How amusing that yesterday’s Chicago Tribune target should be today’s solace! It is the kind of situation with which Mr. Waugh in his young days would have been particularly fitted to deal. Indeed, up to a point (Lord Copper) he does deal with it in the first part of The Loved One. That he should have benefited from it financially is, therefore, right and proper.

The side of Waugh which is most admirable, as Mr. Stopp clearly shows, is his unpretentious dedication to the craft of letters. He has refused to be side-tracked into all those ancillary activities upon which the rest of us have, uselessly and often shamefully, expended so much spirit. He decided to be a writer instead of a carpenter, and thenceforth devoted himself wholeheartedly and conscientiously to this pursuit. How few in our time have managed to do this! Even the terrible Pinfold experience (equivalent, in the context of his life, to Scott Fitzgerald’s Crack-up) was coolly, neatly, expertly recorded. So rare a devotion deserves at least the Order of Merit. I should love to see it round his neck even though he still looked at me across it with those angry, explosive eyes of his.