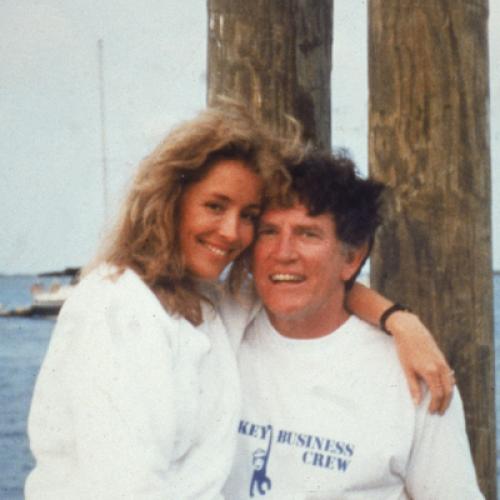 Gary Hart has now become the first American victim of Islamic justice. He has been politically stoned to death for adultery. The difference is that in Iran, the mullahs do not insult the condemned prisoner by telling him that he is being executed not for adultery but because of “concerns about his character,” “questions about his judgment,” or “doubts about his candor.”

As far as I can determine, Gary Hart is the first presidential candidate, president, prime minister. Cabinet member, congressional committee chairman, party leader, or television evangelist, American or foreign, ever to be destroyed solely because of what David S. Brodef, the dean of American political reporters, calls “screwing.” In the past, for a public person’s private sexual life to be considered a fit subject for exposure in respectable newspapers, some additional factor had to be adduced in order to establish a connection, however tenuous, between the screwing and the screwer’s performance of his public duties. At Chappaquiddick a young woman was drowned and the accident was not reported promptly. In the Profumo affair Miss Keeler’s other clients included Soviet diplomats. In the Jeremy Thorpe scandal an innocent dog was cold-bloodedly murdered.

But Gary Hart is held to be different, because in Gary Hart’s case “concerns” had been raised about his “character.” The business with Donna Rice was said to be part of a pattern. What else was part of this pattern? Well, the name change thing. The age thing. The signature thing. Anything else? No. The list ends there. What all these things have in common is that they are trivial. Character, however, is not trivial. It is the collection of qualities that make one person distinct from another; it is the overall moral pattern of a life and work. Character, by definition, is woven through the total pattem of a person’s life; a man does not leave his character at home when he goes to the office. If Gary Hart is a man of bad character, surely the voluminous public record of his actions, decisions, statements, writings, and political maneuvers over the last 15 years must be replete with examples. Those who have condemned his character on the basis of the Donna Rice affair have been quite unable to point to such examples. If character is something that manifests itself solely in a person’s private sexual behavior, yet leaves no trace in the rest of his life, including his work life, then “character” is not very important after all—and the sexual details tell us nothing. If character is something that manifests itself in the totality of life, then we don’t need the sexual details to discern it.

The fact of Gary Hart’s adultery—we must stipulate it for the sake of the argument—is being seen as the philosophers’ stone that converts the rest of his life to dross. It certainly did that to his chances of being president. But to regard sexual facts as having a special, magical power of revelation that makes them superior to all other facts as clues to character is a vulgar distortion of psychoanalytic thinking. It’s voodoo Freudianism.

The entire political and journalistic community “knew” about Gary Hart’s marital infidelities long before the Miami Herald staked out his house, as did any intelligent newspaper reader capable of picking up hints and reading between the lines. For this large group of people the Herald’s tawdry scoop provided absolutely no new information by which to judge Hart’s character. The only new information was provided by the manner in which Hart behaved when the catastrophe struck. In the face of what Time’s Walter Shapiro accurately described as “the most harrowing public ordeal ever endured by a modem presidential contender,” Gary Hart showed an iron gut. His fortitude was remarkable, his coolness under fire exemplary, his courage admirable. Before all this happened I too had questions about Hart’s character, as I have questions about the characters of all the candidates. But I think rather, more highly of his character now than I did before.

But Gary Hart is held to be different, because in Gary Hart’s case “questions” were raised about his “judgment.” And it was certainly an error in judgment for him to imagine that he could enter his own house, on a dark street, in the middle of the night, without being observed by reporters hiding in parked cars. Perhaps, given the way the press behaved, it was also an error in judgment for him not to have anticipated what have turned out to be the public consequences of his private life — though that comes perilously close to saying that the fact that he has been destroyed is proof that he deserved to be destroyed. If judgment, not sex, were truly “the issue,” as we have been told over and over, then Hart’s campaign would still be alive. And the headline in the New York Post would have been HART’S JUDGMENT REVEALED AS FAULTY, not GARY’S LOVE BOAT FOLLIES.

Gary Hart is held to be different, because in Gary Hart’s case “doubts” were raised about his “candor.” The issue is truthfulness, we are told, not adultery: the fact that he lied about his adultery shows he’s a liar. The difficulty with this is that lying comes close to being an intrinsic part of adultery. The fact that a person will lie in the context of adultery proves nothing about his general propensity to lie. Whatever one thinks about adultery itself, lying about adultery has less in common with Watergate-style lying than with such social fictions as a habit of saying “Glad to see you” to people whom one is not in fact glad to see. The point is that if Hart is a liar there must be one or two more lies among the millions of words he has spoken as a public man. Let them be produced.

“This is not about screwing,” David Broder told a Harvard forum last week. “This is about the ability or inability of a candidate to sustain a human relationship over time.” If that is what this is about, then it is not immediately apparent why Hart, who for all his personal troubles has been married to the same woman for 28 years, is to be condemned more than the several other candidates who have divorced and remarried. Still, Broder is edging toward the only even remotely persuasive argument that Hart’s sexual behavior is relevant enough to his ability to govern. This is what might be called the feminist argument. Writing in Newsweek, Suzannah Lessard defended the relevancy of a candidate’s adultery as a measure of his “awareness of the dignity and equality of women.” Yet even Lessard added that “a candidate’s behavior in this respect is significant but not the kind of issue that by itself ought to decide one for or against a candidate.” It’s worth mentioning, by the way, that no major presidential candidate in American history ever put women in such influential and important posts in his campaigns as did Gary Hart. If Hart is a misogynist of some kind, no hint of it ever carried over into any aspect of his work.

The famous dare Hart put to E. J. Dionne Jr. of the New York Times—”If anybody wants to put a tail on me, go ahead”—was both the candidate’s biggest mistake and the press’s luckiest break. The Miami Herald’s stakeout was widely rationalized as a response to this challenge—though how a challenge can be taken up before it is issued remains a mystery. (The Miami vice squad was outside Hart’s house the night before Dionne’s piece was published.) But it is infantile to think that Hart’s foolish dare somehow freed the Herald from any obligation to decide for itself how it ought to behave. That level of moral reasoning is better suited to a grammar school blacktop than to the newsroom.

The bottom line is that no matter what Gary Hart says, Gary Hart’s private life is none of my business, none of your business, and none of the respectable press’s business. The Miami Herald editor who got the tip should have said, “I’m sorry, ma’am, you have the wrong number. You want the National Enquirer.” The reporter who got the order to do the stakeout should have said, “I’m sorry, sir, but it’s more than this job’s worth to be a Peeping Tom.” And when Gary Hart noticed the earful of men parked in the gloom outside his house, he should have called the police and told them he had reason to believe a Libyan hit squad was shadowing him. A couple of reporters spread-eagle against a fender, surrounded by cruisers with red lights flashing and radios barking, might have done wonders for journalistic ethics.

The gross violation of the privacy of Gary Hart, Lee Hart, and their children is part of a general degradation of the public sphere and a general weakening of the distinction between the public and the private realms of life in the United States. This is a social phenomenon with many sources—the Reagan administration’s delegitimization of public action, the human potential movement’s hostility toward “hypocrisy” and exaltation of “authenticity,” and the feminists’ dictum that the personal is the political, to name three. But none of this justifies the Miami Herald and the Washington Post any more than the correlation between poverty and crime justifies mugging.

I don’t mean this to be a defense of Hart, whose public behavior was in many ways foolish. I do mean it to be an attack on the Herald and the Post,which deliberately opened a sluice gate that will not be easy to close. The papers are full of assurances that there will be no peeping into other candidates’ bedrooms without “probable cause.” There was probable cause in Hart’s case because (a) many people knew of the rumors of Hart’s infidelities; (b) the currency of these rumors constituted presumptive evidence that Hart was recklessly indiscreet; and (c) his presumed indiscretion legitimately “raised questions about his judgment.” One might call this the Gossip Standard of Probable Cause. The problem is that Hart is not the only candidate whose “judgment” is called into question by the Gossip Standard. In the current field, for example, I have heard that Candidate A is as notorious a womanizer as Gary Hart, that Candidate B is having an affair with his secretary, that Candidates C and D are involved with members of their staffs, that Candidate E had numerous affairs during his first marriage and got a married woman pregnant, that Candidate F is a homosexual, and that Candidates G and H are adulterers. If I have heard these rumors, thousands, perhaps millions, of others must have heard them too. The Gossip Standard of Probable Cause. I’m confident that the Herald and the Post will not stoop to going after any of this, but there are many newspapers in this country, and not all of them are so scrupulous. If some fourth-rate paper somewhere does a story, and it moves on the wires, and people start calling radio phone-in shows, and the story gets picked up by a couple of third-rate papers, and “concerns” start getting “raised”...

This article originally ran in the June 1, 1987, issue of the magazine.