You are using an outdated browser.
Please upgrade your browser
and improve your visit to our site.
Skip Navigation
The investigation of the Monicagate scandal raises its own questions. 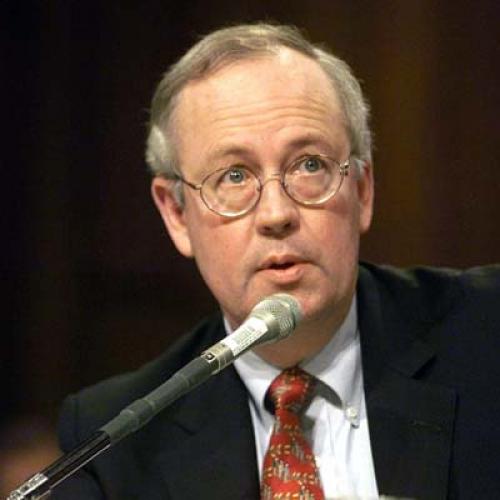 People are asking how Monicagate compares with Watergate. Here's a thought: back then, a president was brought down for using scary police-state tactics — CIA cover-ups, wiretaps, secret tapes, black-bag jobs — in an effort to destroy his political enemies. This time, the roles are reversed: a president's political enemies are using scary police-state tactics to destroy him.

Consider the following from page 41 of the February 2 edition of Newsweek:

FBI agents wired Linda Tripp with a secret listening device. Over lunch, while hidden tapes turned, Tripp walked her unwitting friend back through the whole story. According to knowledgeable law-enforcement sources, [my italics] Lewinsky made particularly damning statements about Vernon Jordan. "He said, `It doesn't matter what anybody says, you just deny it,'" Lewinsky said....

In other words: secret agents of the federal government orchestrated a conversation between two private citizens about incriminating aspects of their private affairs and the private affairs of other citizens. The agents eavesdropped on this meeting and tape-recorded it. Then, these secret agents, or the unelected prosecutors who supervised them, picked an especially "damning" portion of this set-up conversation and described it to the press--in circumstances calculated to maximize both the harm to these people's reputations and the pressure on them to capitulate in later criminal proceedings.

Talk about a scandal! The "law-enforcement sources" who leaked these tidbits were themselves violating at least the spirit of the laws which prohibit the publication of raw FBI material. Certainly, they were violating any notion of fairness toward Lewinsky or Jordan. To me, this one indecent act by sworn officers of the court suggests that Ken Starr's investigation did more violence to the really important values of our democracy than Bill Clinton's alleged dalliance with Monica Lewinsky ever could.

This is not a knock on Newsweek; reporters get their news where they can. But it's revealing that, in an article full of ostensibly self-critical commentary on the magazine's cooperative interactions with Starr's team, Newsweek never stops to consider that the means of leaking this particular scoop might be even more troubling than the contents of the scoop itself.

I've never been a particular fan of Clinton himself or of his administration. (Nor am I endorsing Hillary Clinton's bizarre "right-wing conspiracy" talk.) If the allegations about a pathologically reckless liaison with Lewinsky prove true, and if the president lied in a sworn deposition and to the American people, then I think the sheer tawdriness of it all might render him incapable, and hence unfit, to be president. He may have to resign — perhaps after some delegation of Lloyd Bentsens and Warren Christophers informs him that it's for the good of both the country and his party.

But if Clinton abdicates, how will we feel on the day after? I was barely in my teens when Nixon resigned, but I vividly recall the cathartic climate of August 1974. Not just a bad president, but a corrupt and undemocratic presidency, had been purged. We were relieved. There was closure. As Gerald Ford put it: "Our long national nightmare is over."

Will we feel the same way the day after Clinton resigns? I doubt it (assuming he resigns soon). A bad president will be gone, but not a bad presidency. And we'll still be stuck with the independent counsel law and all its potential for abuse. Meanwhile, where's the national nightmare? By all accounts, the country is in excellent shape, both economically and socially. On the very day that The Washington Post first reported the scandal, it also carried the results of a new poll showing that Clinton's approval rating was 60 percent and, more importantly, that public faith in government was growing. "[F]ar more people than ever say they are satisfied with the way government is working, and fewer people say they are angry," the Post reported.

Among other things, these data reflect a public consensus that there is simply no comparison between the transgressions of this White House, cheesy and sleazy as it has been, and the massive abuses of power by Nixon. (Clinton's affairs with women may constitute an abuse of his power over them as individuals, but it's difficult to see how this constitutes an abuse of his office, much less a violation of his oath.) It is a consensus that has withstood two democratic tests — the elections of 1992 and 1996. And who's to say the people were wrong to accept this trade-off?

Hence the public ambivalence we now see in the polls. People don't approve of what seems to have been going on in the White House, but they also seem reluctant to fire the president based on his job performance. Do self-protective lies about the most embarrassing aspects of his private affairs — even lies under oath — justify his removal, given the performance of his administration in other respects? Inside the Beltway, the obvious answer is yes. But in the rest of the country, the answer seems to be somewhere between "not quite" and "I wish this whole thing would go away." Americans seem to realize that their own tolerance of Clinton's personal excesses was tantamount to complicity in them — and they are cautious about overturning the government in a time of prosperity.

This view may be wrong, but it deserves a hearing in some formal legal or democratic process. How could that happen? Clinton has already had his two runs for office. We can't call a midterm referendum, and the 1998 elections for 435 disparate House seats wouldn't be a good proxy. Divisive as the Clarence Thomas-Anita Hill case was, at least it finally came to a vote in the Senate. But that's not an option here.

It is in this sense that I almost hope Clinton will refuse to step down and dare his foes to impeach him. Impeachment alone provides a way to make all our elected representatives put up or shut up about this issue. As politicians, not jurors or judges, they will naturally weigh all the factors — including not only the president's criminal liability and personal disgrace, but also, appropriately, the evident public satisfaction with his job performance. (Not that anyone's thinking about it at the moment, but impeachment would also be fairer to Clinton than the current campaign of wiretapping and leaks.) Yes, impeachment would be wrenching and timeconsuming. But the removal of a president is, at bottom, a political decision that should be made by political institutions. Far better to put American democracy through the crucible of impeachment than to let any president — even this one — be overthrown by lawyers and journalists.

This article originally ran in the February 16, 1998 issue of the magazine.