You are using an outdated browser.
Please upgrade your browser
and improve your visit to our site.
Skip Navigation
Marion Barry's resignation should not be traded for leniency. 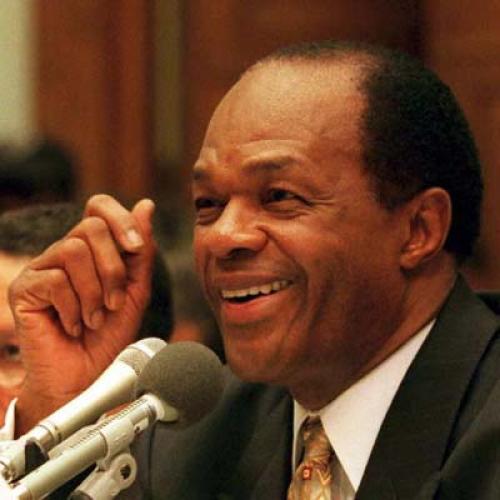 The Mayor of the District of Columbia, Marion Barry, recently went on a 48-hour odyssey of self-discovery, and here is what he found: "I have spent so much time caring about and worrying about and doing for others, I have not worried about or cared enough for myself." This may strike some people as odd — invoking selflessness as an explanation for spending one's leisure time taking drugs with beautiful models in hotel rooms. But at least it isn't insidious, as is the more conventional explanation for Barry's self-destructive visit to the seventh floor of the Vista International, where he allegedly bought and smoked crack and tried to bed down with an FBI informant, all while the camcorder was purring.

The conventional explanation is that Barry had a debilitating disease: he was in the clutches of drugs, his volition smothered by liquor and cocaine. Barry's remaining apologists have explicitly pushed the disease alibi, and it was implicit in his maudlin plea for pity on the Sunday after his arrest: he was sick, so he would "begin to heal my body, mind, and soul" — after which, presumably, he would be all better (i.e., electable, or at least pensionable). This cycle is the medical equivalent of sin, penance, and redemption, with one difference: to admit sin is to accept blame; to claim illness is to duck it.

The disease paradigm for substance abuse is open to question on scientific and logical grounds, but its practical upshot is what makes it finally unacceptable. Suppose Barry were to get what, in the immediate aftermath of the bust, he has seemed to want: to be allowed, after being "cured," to stay in, or quickly return to, high public office, even though he has broken the laws he was sworn to uphold — not just in taking drugs, but almost certainly in perjuring himself and probably in misspending public funds in pursuit of various forms of exotic entertainment. Will the new, improved Mayor Barry, once forgiven, agree that society should comparably forgive other drug abusers? Should a man who robs or murders someone while on crack be released from prison upon displaying a receipt from the Betty Ford clinic? Of course not. The appropriate penalty for people who rob or murder is to be sent to jail, regardless. And the appropriate penalty for public officials who grossly breach the public trust is to be banished by the voters from office for many years, regardless.

There is a second misconception about drug abuse also brought to light by the Barry incident: the one toke-and-you're-dead myth. In a well-meaning effort to scare kids away from hard drugs, educators, public officials, and journalists have jointly fostered the idea that to smoke crack once is to fall immediately into its unrelenting, brain-addling thrall. All the Washington schoolkids who have been told this must be confused these days, and not just because the Mayor who toured their schools preaching the evils of drugs has been revealed so spectacularly as a monumental hypocrite. If Mayor Barry was a crackhead, the kids may be forgiven for wondering, how come he was able to give speeches and hold press conferences and do a superficially passable job of running a big city? This leads to two more questions: Is it possible that teachers have been misrepresenting the dangers of drugs? Does that mean drugs are OK? Well, yes and no.

Here, in a form even an adolescent can digest, is the truth about crack, and many other drugs. If you do it once, you are significantly more likely to mess up your life than you otherwise would have been. If you do it a second time, the chances rise again. And so on. At some point — assuming you're not among the few who can indefinitely take such an alluring drug in moderation — continued use entails some degree of ongoing damage to your life, and the chances of something truly catastrophic happening become high. (The fact that the drug does not instantly destroy you, that it allows you to believe you can "handle" it, makes it not less but more dangerous, though in a subtler way than is suggested by TV spots comparing users' brains to eggs in a frying pan.) At a certain point it may in some sense be beyond your power to step back from the brink. Still, when catastrophe strikes, it's all your fault, for two reasons: (1) you knew, or should have known, the odds when you went into the game; and (2) society can't afford to hand out blanket exemptions from moral responsibility.

Barry remains in office at this writing, but as the initial shock of his arrest wears off, his departure seems only a matter of time, and of negotiation. In his Sunday homily, surrounded by ministers, he admitted to nothing more specific than "human frailties." A franker admission, like his job, is one of the cards he still holds, to be played later in his dealings with the prosecutors. The U.S. Attorney has hinted that Barry's resignation might be extracted as part of a plea-bargaining package. Perhaps Barry should resign, but not that way. He should not be allowed to trade his resignation for leniency. Prosecuting this Mayor is the U.S. Attorney's duty, but removing him from his position or preventing him from running for re-election to it is not. That's up to Barry himself, or, should he try to hang on, to the voters. And if by some wild mischance they decide to reelect him — well, that's democracy. Such things have happened before in big cities. Remember Mayor Curley?

It's not likely to happen here, though. Barry has not been an especially beloved figure, and he has been a poor Mayor. The chief beneficiaries of his 11 years in office have been the big downtown developers. The poor and working-class people of Washington's black neighborhoods have fared less well. The murder rate is the highest of any big American city. So is the infant mortality rate. The bureaucracy is downright Soviet in its size and inefficiency. Corruption is widespread, and two Deputy Mayors and six department heads have been among the convicted.

As Mayor, Barry has built his power through a political machine oiled by lavish hiring: the municipal payroll has grown by 10,000 over the past six years, making a total of 50,000 city jobs for a population of 620,000, His popularity, initially based on his youthful service in the civil rights movement, has since the first allegations of drug use six years ago been based increasingly on demagogic defiance of the "white" news media, Barry has never hesitated to blame his troubles on racism, especially the supposed racism of the press. He has encouraged the notion that he is a victim of a "plan" to restore the city to "white" rule. What tends to be forgotten is that when he himself won the 1978 Democratic primary — tantamount to election — he did so with a plurality of barely 35 percent against an all-black field, and most of those votes were white. The most important factor in his victory was the editorial endorsement of the Washington Post.

The murmurings of racism by Barry's remaining supporters have found a muted echo in the charge by Benjamin Hooks, executive director of the NAACP, that the Mayor's arrest fits into a pattern of "selective enforcement of the law" against black elected officials. Unless Hooks has some evidence, it's an irresponsible allegation. Can he point to an egregiously law breaking white official whom the FBI has ignored? Locally, at least, the opposite appears to be the case. The U.S., Attorney's office in Baltimore stung white Prince George's County Council Member James M, Herl, also on a cocaine charge, just a week before Barry's arrest, making similar use of a female lure. If Justice Department officials were out to “get” Barry, it isn’t because he is black but because they believed his offenses were serious enough and frequent enough to warrant prosecution.

Newsweek described Barry’s humiliation as “a stunning blow to black elected officials nationwide.” There is no reason why this should be so, any more than the humiliations of Richard Nixon, Spiro Agnew, Gary Hart, and Jim Wright were stunning blows to white elected officials nationwide. Marion Barry was not the first black Mayor of Washington. He will not be the last. And he certainly will not be the best.

This article originally ran in the February 12, 1990 issue of the magazine.