You are using an outdated browser.
Please upgrade your browser
and improve your visit to our site.
Skip Navigation
Gerald Ford, Nelson Rockefeller, and the 1976 Republican nomination. 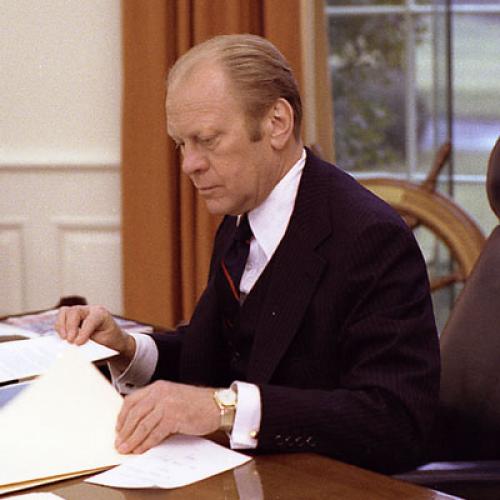 The President's second press conference at the White House in 11 days, after nearly five months with no press conferences in Washington, produced some wonderful pictures and in several other respects furthered his humiliating fight for his party's nomination in August. The pictures showed him standing, confident and laughing amid a gaggle of reporters, on the White House lawn with the north portico of the executive mansion in the background. His answers to questions played upon his incumbency, an asset that of late had not been as helpful to his candidacy as it is traditionally assumed to be. By inference, Mr. Ford compared his 27 years in national politics and government with Jimmy Carter’s single term of four years as governor of Georgia. The whole affair reflected the conclusion, arrived at in recent weeks and forced upon the President and his advisers by his dim performance in the Republican primaries, that his best hope of nomination and election lies in his being as presidential as possible even when he’s campaigning and, at this preconvention stage, wheedling and bargaining for the absurdly few individual delegate votes that he needed in order to defeat Ronald Reagan for nomination on the first ballot in Kansas City.

A reporter's reference to the publicized and rather pretentious process of interviewing and pondering that preceded Carter's choice of Senator Walter Mondale to run with him for the vice presidency gave the President his shot at his opponent's relative inexperience. Mr. Ford said he'd been thinking about his own choice for some time and continued: “I know all of the individuals who are being considered very well. I have worked with them, known about them. . . . Therefore it won't be a last-minute analysis. It will be one based on a good many years of experience and opportunities to know how they performed in public office and otherwise.” Two other answers displayed the President in his first direct reaction to the Carter campaign and, as it turned out, having his first direct impact upon a Carter position. The indications in the Carter and Mondale acceptance speeches at the Democratic convention that the nominees planned to make issues of the Republicans’ Watergate past and of Gerald Ford’s pardon of Richard Nixon caused the President to abandon his hitherto flat opposition to legislation that would remove the main responsibility for investigating and prosecuting federal official wrongdoing from the Department of Justice and vest it in special prosecutors. Mr. Ford announced that he’d go along with the general approach if the President were authorized to appoint a single, permanent special prosecutor, subject to Senate confirmation, rather than the temporary prosecutors who under pending legislation might be chosen either by the Attorney General or, if he failed to act upon a complaint, by appellate courts. The change was a sign of awareness that any appearance of indifference to Watergate and its lessons could be fatal to a Ford candidacy.

When the President was reminded of Senator Mondale’s explicit and Carter’s implied criticism of the Nixon pardon and was asked whether he considered it a liability, Mr. Ford defended the pardon in the same stanch way he has ever since he granted it. “I decided to grant the pardon in the national interest,” he said, and he finished his answer on a note of defiance: “I would do it again.” At a press conference in Plains the next day, Jimmy Carter in effect swallowed his own implied criticism and repudiated Mondale’s explicit criticism of the pardon. He said he still thought the pardon “ill-advised” and “improper” but wasn't going to make an issue of it in his election campaign. Comparing his view with the one asserted by Mondale at the New York convention, Carter said with a remarkably open touch of pragmatism: “I personally think my position on the pardon is preferable from a political viewpoint. The American people know who pardoned President Nixon. They know the circumstances involved in the pardon. They don’t need it raised for political advantage and they would resent it if it was.”

At the latest press conference and at the previous one, much probing for the President’s thoughts about a vice presidential nominee produced no information whatever. The White House inquirer is told that private discussions of the subject with Mr. Ford are no more informative. Seven acquaintances of mine, five of them officials and two of them private citizens, who have talked about the matter with the President insisted in late July that they had no inkling of what he intended to do or even of whether he knew then, after the Democratic convention and nominations, what he was going to do. My impression was that if anybody around Mr. Ford really had some indication, it was staff chief Richard Cheney and he wasn’t saying. A reporter’s inquiries over the past several weeks did, however, elicit some interesting indications of what the President was hearing and of how he reacted to it.

The most interesting figure among those who talk about the President’s own nomination problem and about his vice presidential problem with him is Vice President Rockefeller. The gist of his advice to the President and to all others who will listen is well known. It goes as follows: now that Jimmy Carter has been nominated, forget the South, Don’t let Carter's choice of a prominent and committed liberal, Senator Mondale, for the vice presidency trap the Ford forces into alienating the moderate-to-liberal segment of the electorate by excessive damnation of Carter as a hidden liberal and of his ticket as a dangerously liberal one. Go for the North and Northeast, where most of the big blocs of electoral votes are. Go for the moderate-to-liberal majorities in those states (New York, Pennsylvania, New Jersey, Massachusetts, etc.). That means—no Reagan, no Connally for the vice presidency, despite enormous convention pressures for such a nominee. It means the choice of a moderate middle-roader, middle perhaps to the point of being innocuous. Senator Howard Baker of Tennessee is cited as an example. Governor Dan Evans of Washington State, an able man who gets much less national notice than he deserves, is another acceptable prospect by this measure. The possibility that pro-Reagan delegates, whether declared for him or officially committed to the President, may be so insistent that they deprive Gerald Ford of his choice and force Reagan or Connally upon him is recognized by Rockefeller and by others who take the Rockefeller line. If this happens, they argue, let Mr. Ford be in a posture that makes it clear that the convention and not he has condemned the Republican party to electoral suicide.

How does Gerald Ford respond in such discussions, whether to the foregoing or to opposite advice? The answer provided by one participant in Oval Office talk about campaign problems is that the President doesn’t respond. “With this President,” says the acquaintance quoted here, “you don't discuss anything. You speak your piece, he listens, and that’s all. You learn later, if at all, usually through somebody else or from what is done or announced, how he reacts to what you’ve said to him.” It’s not that Mr. Ford is rude or secretive, according to this account. It’s simply that, except on matters about which he's already made up his mind when a point is broached, he is wary of instant decision and commitment and prefers to take his time.

It’s especially interesting that Nelson Rockefeller is defending and supporting Gerald Ford as loyally and strongly as he is. Among the tensions at the Ford White House that were described in my last report, none is potentially more destructive and actually under better control than the tension between Rockefeller and the President. Rockefeller feels that his withdrawal last November from consideration for the vice presidential nomination was deliberately devised and forced upon him. He is convinced that Donald Rumsfeld, former White House staff chief and now Secretary of Defense, principally contrived the pressure in furtherance of his own ambition to be the nominee. Does Rockefeller hold the President fundamentally responsible? The answer heard in Rockefeller quarters is, he allowed it to happen. Yet the Vice President continues to do a better job of articulating Gerald Ford’s claims to nomination and election than the President does.

This article originally ran in the July 31, 1976 issue of the magazine.