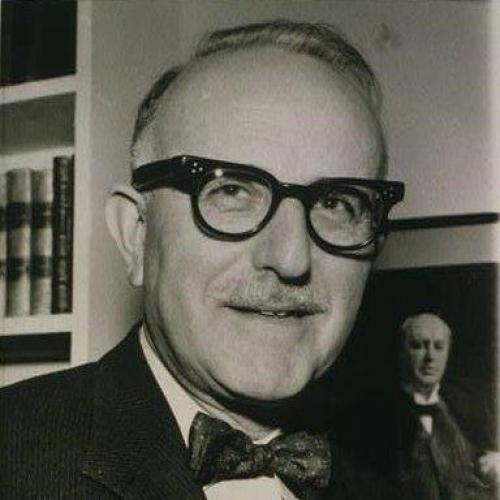 A review of Portrait of André Gide by Justin O’Brien.

André Gide sat for his portrait many times—and largely to himself—during his sixty years of creation. He made of his books a long and continuous confessional, a mirror of his adolescence and troubled manhood, a polished reflector of his meditative old age. To a greater or lesser degree this is true of all writers: their works inevitably are the mirrors of their minds. Gide, more than most, however, not only used his writings to ease his troubled inner spirit, but seemed to resist the final act of cutting the umbilicus that bound them to him. Before he launched a work it was discussed and analyzed in the perpetual  self-communion of his interminable journals. Launched, it often acquired a sequel, or “retouches,” or an explicative preface; or it became promptly the subject of a correspondence that did not wait for posterity to find itself in print.

A writer so mirrored is bound to be a challenge to the biographer. The biographer must take account not only of the “hard facts” of his subject’s life, but see them transmuted into the now glittering, now somber actor’s attire, donned before the ever-present reflectors. He must paint his portrait having before him a veritable gallery of self-portraits. The venturesome biographer’s picture must not resemble too closely the existing pictures for he must be able to see his subject in better perspective than the subject saw himself. Here lies, perhaps, the essential weakness in Justin O’Brien’s otherwise painstaking and saturated picture of Gide. He leans too much on the self-portraits; he creates not so much an independent portrait as a kind of ruminative and pleasant stroll through the Gidean picture gallery. Here he seems to say that Gide is playing Narcissus; and there he is Proteus, fancying himself in many roles, Gide’s favorite myth. And now he sees him as Philoctetes, suffering from his homosexual wound; but so ardently does he apply the self-therapy of his writing that he emerges as Oedipus in a process of self-integration.

All this is very ingenious, even if it does split Gide too neatly into thirteen classical segments—among them Dionysius, Icarus, Prometheus and Corydon—and it is, I suppose, what O’Brien means when he tells us that he is writing a “fluid portrait,” that is keeping his colors wet for possible retouches. O’Brien, however, knew the old Gide, he was writing with the image of the man still before his eyes and the sound of his voice still in his ears. (It is true that he naïvely seems to believe that the astute French writer answered his questions over several summers “without fully knowing” that he “sat to me for his portrait.”) But the portrait is drawn not so much out of O’Brien’s memories of the master, or the old man’s doubtless admirable talk, as from the works themselves. And not only too much on Gide’s terms, but with an often too defensive tone that only reveals the biographer’s failure to disengage himself from his subject.

O’Brien clearly has other problems that are beyond his control. There are certain obvious gaps in the pages of even so documented a life as Gide’s which only time can fill. The biographer must still be discreet about Gide’s daughter and his relationship with Elisabeth Van Rysselburghe, whose name he cautiously hides in the index without allowing it to appear in the text of the book. Indeed he uses words like “rumor” and “reported” in the one paragraph devoted to Catherine, as if it were not an established fact that she exists, has married and is a mother.

Yet any details throwing light upon a strongly heterosexual Gide, however difficult to establish, are supremely important in assaying the life of one who described his homosexuality to the world and defended it in so many brilliant pages of his prose. We have here a biographical drama as bizarre as it is significant: the image of a cultivated mind and a creative spirit, brought up in a household so rigidly Protestant that Gide ever after spoke of himself as being a combination of a little boy having fun and a Protestant minister; a being, moreover, in whom the natural sexual appetites were associated exclusively with sin and held in abhorrence, while Woman was an exalted image of chastity and purity untouchable by man.

In Gide’s life such a woman existed in the flesh, if one can speak of flesh in mentioning his idealized and etherealized cousin Madeleine. If women were forbidden, and sexual relations with them were to be abhorred, the boy in Gide, on reaching manhood, discovered that other boys were not (especially if they were of different race, like young Arabs in Africa) and that anxiety producing heterosexuality could give way to exhilarating homosexuality, even if afterwards there was guilt to be expiated. Gide married his cousin, Madeleine two or three months after his mother’s death (his father had died when he was eleven) and he established a strange modus vivendi for himself: he had a virgin in his home, pure and undefiled, for the Protestant minister in him to love, while the fun-loving boy could release his animal nature among other boys.

We had most of this story long ago from Gide himself and further details of his marriage emerged in the posthumous pages, Et nunc manet in te ... published in 1951.

But the presence of a daughter, and the long friendship with Elisabeth, suggests dramas; beyond those which Gide revealed.

O’Brien discusses, for instance, the burning of Gide’s letters by the longsuffering mother-cousin-wife in 1918, in what he believes was Madeleine’s disillusionment on discovering Gide had fallen in love with a youth, thereby ceasing to dissociate love from animal desire. Might there not, however, be more than this in Madeleine Gide’s act of disillusion and “jealousy”? Elisabeth was already on the horizon; Gide had met her during the first World War. And while this is all vague and requires definition, the evidence does suggest the need for further data. Gide’s trumpeted homosexuality would take on a different light if we discovered him capable of having a relationship with a woman such as he was unable to consummate with his wife.

For the present, Justin O’Brien’s portrait remains, therefore, tentative and marginal. The isolation of the “dominant aspects” of Gide’s personality in the separate myths makes for a less integrated critique of the work than that given us two years ago by Albert Guerard in his admirable study of Gide. And there is a failure, too, to see the interrelatedness of the myths as expressions of Gide’s central problem, that of his narcissism. O’Brien fights against the idea that this was anything but a “pose.” Yet all of Gide’s writings are a function of it: his use of journals and diaries, his very publication of these during his lifetime, his issuing of small editions of his works, (that is his use of art as self-explanation rather than communication), his penchant for the dialogue form, (that is for conversations with himself), the constant resort to the first person in his tales, his repeated reliance upon mirror images, his histrionic sense (“I am playing no other part than myself”), all bespeak the conscious self-imager.

It was an essential trait in Gide, the source of the series of beautiful works shown us in his multiple mirrors. That is justification enough for it. Even Gide’s mild flirtation with Communism (for which O’Brien is again needlessly apologetic, since Gide himself quickly penetrated the facade of doctrinaire fanaticism and never committed himself) was but one of the writer’s periodic attempts to break out of the charmed circle of the Self. He never succeeded and the world’s literature is all the richer for it.