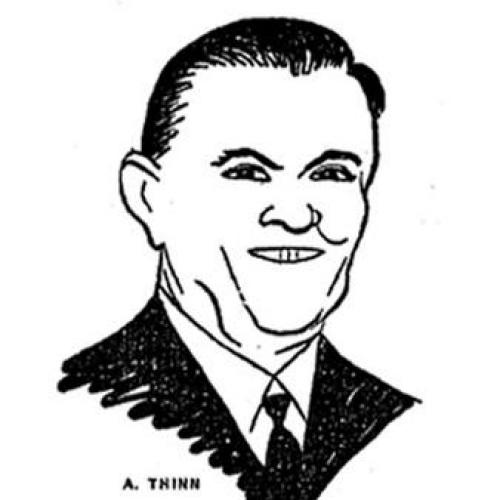 At midnight last August 5, Wilbert Lee O’Daniel stood in his pajamas on the station platform at Beaumont, Texas. He made his last speech as Governor of Texas and climbed back into his berth on the train carrying him to Washington.

It is said that as he spoke, Tom Connally, Texas’ senior Senator, was imploring Chesley W. Jurney, the sergeant-at-arms of the Senate, to place “Keep off the grass” signs on every inch of Capitol lawn. Mr. Connally is said to have warned Jurney that without the signs the lawn would not survive long after the arrival of the junior Senator.

Senator Connally had good reason to fear for the lawns. There once was a no less beautiful lawn around the eighty-eight-year-old Capitol at Austin. But the climax of Pappy’s second inaugural as Governor was an all-night barbecue. For days before the inauguration, goats pigs and calves arrived in Austin for the slaughter. One poor buffalo was even sent, and lived miserably in a small pen until Pappy put on his hunting clothes, went out to the pen and with a high-powered rifle slew it with a single bullet at five yards’ range. Then the lawn was dug up for barbecue pits and for two days the smell of roasting meat hung over Austin. Twenty-two thousand people feasted at the barbecue, including “Spear,” the new member of the Barbershop Commission who was appointed because he was the only barber in Austin who would shave Pappy free of charge. They ate and sang, and respectable citizens of Austin looked away, speaking in undertones of “the rabble of low degree.”

When Pappy arrived in Washington he went straightaway to the White House to call on the President. The President, he was told, was away on a fishing trip. Crestfallen, Pappy told the people of Texas in his weekly recorded broadcast that the President had apparently left town because he was afraid of meeting Pappy. It was only when the records were being rushed back to fifteen Texas radio stations that Pappy learned to his dismay that the President had left Washington not only to avoid him, but to meet Winston Churchill.

When the President returned, Pappy went to see him and they got on splendidly. “His appearance and actions,” Pappy said in his next broadcast, “conveyed the impression that he was master of the situation. In other words, his facial expression and demeanor portrayed the same confidence that Grandma used to show when I was a boy playing checkers with her, just before she jumped four or five of my men and got into the king row.”

Soon after his White House visit, Pappy joined the pilgrimage to the ranch home of George Washington at Mount Vernon. On the way back he went to a restaurant and asked for a rush order of ham and eggs. “I wish you could have seen the expression which registered on the waitress’ face,” he said in his third broadcast back home. “She looked at me like she thought I had lost my mind and said, ‘We have some fine broiled ham, Sir, but we do not serve EGGS.’ Now folks, think of that! An eating place without EGGS!...Well I was too hungry to give up my place at the table so I had to eat ham without EGGS for the first time in my life….I have told you folks about how funny things are up here, but whoever heard of boycotting the lowly HEN? What harm has the HEN done? I have been feeling sorry for the Horse, then the Cow, and now I am feeling sorry for the HEN. I am so hungry for a feast of good old fried EGGS that I wish some of my farmer friends in Texas would send me a dozen EGGS. I want to eat them here in Washington and I don’t mind if I decorate my necktie a little with them and I might walk down the avenue thus advertising TEXAS EGGS by the yellow spots on my necktie.”

Sure enough, Pappy’s farmer friends came through. “There’s one thing I want to say right here at the opening of this program,” Pappy said at his fourth broadcast: “And that is how much I appreciate the many dozens of fine, big TEXAS HEN’S EGGS which our friends down there have sent us. Now maybe you think I haven’t been feasting on these eggs—Yes-Sir-ee! I’m not eating the ham without the EGGS these days!”

Surrounded by thousands of Texas EGGS, Pappy still felt restless and homesick. His broadcast record of September 7 is a masterpiece of nostalgia. It begins with a rendering of “Home Sweet Home” by the Hillbilly Boys and the Texas Songbird. Then “We are the lostest folks you ever saw, up here in this big city, living in hotel rooms,” says Pappy wistfully. “There’s no driveway to drive into…no garage with kiddie cars or bicycles laying in the way to get out and move….No beans and ham and apple-pie fragrant odors wafting in through the kitchen door…no Pat and Mike and Molly with their problems and plans and laughter…just a hotel room on the fifth floor. Now, folks, my work keeps me so busy that I don’t have time to notice all this so much…it’s the Missus that it’s telling on…she keeps talking about the house where she can have another canary bird…if you recall little Jerry, the canary who lived with us for thirteen years, and almost all the time we were in the Governor’s Mansion at Austin, is buried on the Mansion grounds. Then she always had her goldfish—something happened to them all, but she still has her fish bowl—I guess they all drowned when they found out we were moving from Texas.”

To cheer up the Missus, Pappy took her to the movies. But “as soon as we got in and were seated,” Pappy says on the broadcast, “the orchestra began to softly play ‘Home on the Range.’…I looked over at her but she had her face covered with her handkerchief.”—(Pappy’s breaking voice is interrupted by soft voices of the Texas Songbird and the Hillbilly Boys in “Home on the Range.”) “Yes, when that song was over,” Pappy continues, “the newsreel of the war flashed on the screen…one soldier looked a lot like our son Pat…she could see no more of that newsreel.” (The Texas Songbird and the Hillbilly Boys break in with “Just Before the Battle, Mother.”) “Then the feature came on—‘Life Begins for Andy Hardy,’” but Andy Hardy grew up during the film, and that reminded them of another son, Mike. (The Texas Songbird and the Hillbilly Boys come in with “Old Folks at Home.”)

But after the showers and the sun breaks through. Pappy catches the sob in his throat and cries, “I’m going to ask the Texas Songbird and some of the rest of them to say what is uppermost in their hearts right now.” (The Texas Songbird and the Hillbilly Boys strike up Pappy’s own song, “Beautiful Texas!”)

The first unwritten rule of the Senate is that no Senator shall speak for two months after his induction. Sure enough, Pappy arose on his second day in the Senate. “The war now raging is terrible and must have consideration,” he told the Senate, “but the thing of which I speak is even as great a menace, if not greater than the threat of war.” It was the dictatorship of the “powerful, dominating…bloodsucking, money-minded…power-crazed, wild-eyed labor racketeers.” He wound up by introducing a bill to outlaw closed-shop contracts. It received rather unkind treatment, however, and Pappy was forced to withdraw the bill and reintroduce a resolution providing for a constitutional amendment. The amendment guaranteed “freedom to work.” “Freedom to work,” as Pappy explained to me when I went to see him, “once you have a job.”

IN PAPPY’S OUTER OFFICE, Pappy’s secretary had fastened his eyes upon mine. “The Senator will see you,” he said. “But let me tell you this. He don’t always cotton onto newspapermen. Down in Austin they were rough on him and he don’t forget easy. But you play along with Pappy, and he’ll play along with you, see. He can give you plenty of news. He makes news.”

When I met him, Pappy didn’t look at all as I had expected. He was totally unlike, for example, Huey Long, who had a conspicuous sentimental streak. In spite of the broadcasts I have quoted, Pappy seemed without sentiment. His shifty eyes and nervous hands were like those found among people with an abnormal fear of persecution. He should not be taken lightly; when he seems to play the clown he is in fact suiting himself, with astonishing skill, to the tastes of a large section of the American people. He has real power and great ambition, and he will make news. I left him uneasy and glad that he lacks Huey’s genius for organizing.

Pappy will attempt to pass a great many biscuits to the American people in the next six years. The people, if they are smart, will pass the biscuits right back to Pappy.

This article appeared in the October 27, 1941, issue of the magazine.