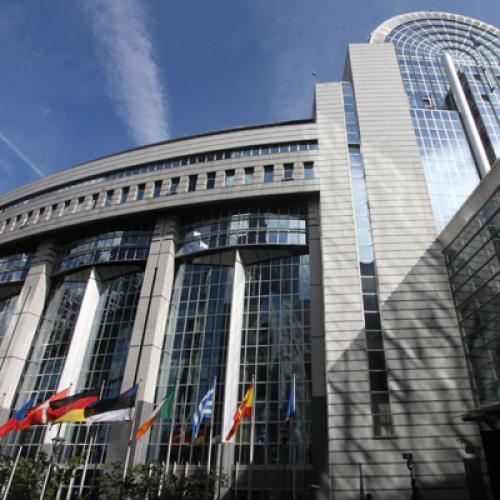 I recently spent three weeks in Germany and France—in the very center of Europe-to-be. In Frankfurt, a city of banks, all the bank windows feature a handsome poster showing the design of tile new euro. The bills have a map on one side, an architectural design on the other. They have no faces, and this absence is, perhaps, their most important symbolism. Most of the people I talked with—Social Democrats, Greens, left academics, and liberal members of the different religions communities—are good Europeans. This is especially so in Germany, where the left, and many members of the Christian Democratic center, too, see the European Union as a permanent constraint on German nationalism. But I also found a lot of anxiety about the fate of democracy in the emerging union—a fear of the facelessness of Europe’s new rulers.

In its modern versions, democracy is a political regime specifically for nation-states. That was the setting tot all the revolutions and popular mobilizations that produced universal suffrage, political rights, and accountable government; none of these have existed in any other setting. There is as yet no effective transnational democracy in Europe or anywhere else—no Euro-wide parties, for example (despite the once-vaunted “internationalism” of social democracy), and no decision-making agencies that are responsible to a Euro-wide electorate.

Representatives to the European Parliament are chosen in what are essentially national elections. But the body has no substantial legislative powers: It can resolve but it cannot enact. It conducts hearings and investigations, and it has issued—so I was told—some useful reports. But it can’t be said to control the Brussels bureaucracy, nor will it control the officials of the European bank soon to he established in Frankfurt.

European democracy, then, is indirect. The bureaucrats and bankers are responsible to the various heads of state (or to the most powerful among them), and the heads of state are responsible, in turn, to their various national electorates. But many people in those electorates, and probably some heads of state, too, feel that they are being forced to submit to policy decisions, particularly with regard to the economy, that they had no part in making and cannot effectively resist. A couple of years ago, I met the newly elected socialist prime minister of one of the smaller European states. I asked him what it felt like to come to power and rule a country. He described a budget-making process largely dictated from Brussels and concluded, “One doesn’t rule a country these days; one relates to it.”

Can democracy work beyond the nation-state? The truth is that we have virtually no experience from which to address this question. The founding of the American union isn’t a useful model; there isn’t going to be a United States of Europe. What made possible a strong federal government in the U.S—and a politics that transcended the 124 stales—was the relative homogeneity of the American people (given the exclusion of the Indian nations and the black slaves). But Europe consists of radically heterogeneous peoples, each of which is territorially based, of ancient standing, speaks a different language, and has a long history of self government. Sovereignty may be eroded over time: that process is well begun. But it won’t be conceded en bloc. And so democratic politics in the ordinary sense, the open competition of parties and leaders, will remain national in character while Euro-wide decision-making will continue to take place largely out of public view.

All of which is reason to worry about European union but not to oppose it. The bureaucrats and bankers are Marxists of a sort. They seem to think that politics follows economics—the euro is the key to Europe. If they are right, the gradual Europeanization of political society should follow as a response to an increasingly Europeanized economy. I would guess that the members of Europe’s Socialist, Social Democratic, and Labor parties are already starting to meet regularly; the Christian Democratic conservatives and center-right parties will presumably do the same; the Greens, too. These different groupings won’t compete for power together, but they can at least coordinate their party programs.

It is especially important that labor unions from different countries aim at common policies. Since capital is already transnational, its requirements are well looked alter by the faceless bankers. But the conditions and remuneration of work are still, despite Europe’s “social charter,” local issues. The recent strike at Air France suggests the difficulties of labor coordination-the French pilots, before their strike began, earned more than the pilots of any other European airline. Without coordination, however, workers won’t have much to say about crucial economic decisions. Only elite groups, like the pilots, can still win local victories.

The new social movements reach across the old borders, though with what effectiveness is not yet clear. French and German feminism certainly look very different, not only in cultural style, but also in policy substance. I am not sure that feminists from the two countries even read one another’s writings.

Indeed, language may be the crucial obstacle to tile formation of an all-European political public. There are as yet no genuinely European newspapers or magazines. The International Herald Tribune probably comes closest, even if its articles and editorials are drawn from The New York Times and The Washington Post, not from Le Monde or La Stampa or the Frankfurter Allgemeine Zeitung. There is now a Euro-public (even if some of its members are Euro-skeptics), but this public hardly extends beyond the policy elites. Hence the importance of parties and movements that bring ordinary men and women into the crucial debates—and let them know that they have been brought in Ultimately, however, there won’t be a coherent political society until its various organizations find a visible institutional focus—and what can that be? A real parliament? A Euro-cabinet?

Europe has been a top-down project, and its success has probably depended on that. For the immediate political losers are the citizen voters of each of tile countries who’ve seen their sovereignty erode. Now Europe has to become a bottom-up project, too, so thin this loss can be redeemed and democratic politics can find an all-European home. Whether this is possible I don’t know, but the dangers of failure are plain to see. There are already nationalist politicians in every European country, mostly but not only on the right, trying to create, or exploit, popular resentment against the faceless bureaucrats and bankers. Nobody that I spoke with had a sure answer to these local, possibly nasty, nationalisms. Somehow European politics will have to be provided with … what? Not a lone accountable face—that’s not possible or, for that matter, desirable. But something like what representative democracy has always required: a set of accountable faces.