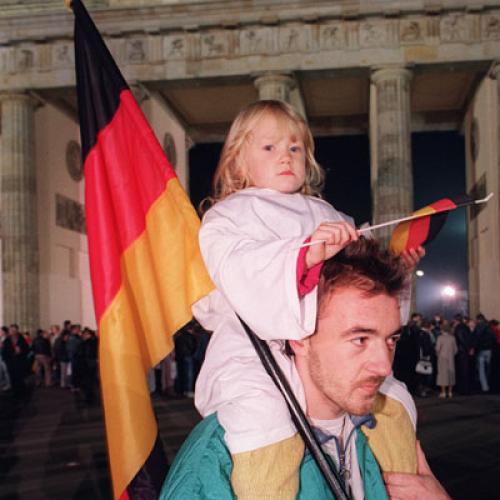 Last week, while the British were safely off at their Commonwealth Conference in Zimbabwe, the French and Germans announced a major increase in the troops committed to the Western European Union, from 5,000 to 30,000. It was the latest piece of evidence that the EC countries—in particular, Germany—are ready to bear more military and diplomatic responsibility in Europe and beyond. The swift superpower disarmament on the Continent, the resilience of the German economy, the relative economic decline of the United States—all these have also added to the force of the argument.

It is, however, an empirically dubious one, and those now fretting over the possible obsolescence of NATO need not get too alarmed. Just over a year after unification, the new Germany is in no shape, politically, economically, psychologically, to play the role some Americans are yearning for. The country faces still massive economic consolidation and adjustment. Its social equilibrium—regional, religious, cultural—has yet to be found. Its reluctance to become an international superpower has deepened since reunification. Even in its immediate sphere of influence, Western and Eastern Europe, Germany is still a diplomatic weakling.

Germany’s military power is decreasing. The Bundeswehr, like most European armies, is shrinking: by 1994 it will be reduced from the current 655,000 to about 370,000, a minuscule fraction of which will be committed to the WEU. Article 87 of Germany’s Basic Law still curtails Germany’s ability to act militarily, except in its own defense. Article 24 allows the country to join in “a system of mutual collective security for the maintenance of peace,” meaning the deployment of German forces outside the country, but there’s still massive hostility to it. Although Helmut Kohl tried to shift public opinion on this during the Gulf war, he failed. A postwar poll showed that only 32 percent of Germans supported amending the constitution to allow the Bundeswehr to join in U.N. peacekeeping operations. Fifty-three percent were against.

Forty years of peace, even cold peace, and the inculcation of pacifist ideals have taken their toll on the German mind. The Germans contributed $11 billion to Desert Storm, $2 billion more than Japan, and $4 billion more than Kuwait. Afterward they felt extorted; next time they may refuse to participate financially at all. They didn’t respond kindly to arguments that lower oil prices disproportionately affected their oil-importing economy. Germans use less than half as much oil per capita as the United States, and tax it far more heavily. The average American uses 484 gallons of gas a year; the average German, 206.

Even within Europe, where the new Germany is a dominant economic force, German political clout is a chimera. In the EC’s cramped, futile attempts to keep Yugoslavia together, and to broker a succession of failed cease-fires between the warring states, Germany trod very carefully in a region where German intervention is a touchy point. Even in less delicate areas—such as European monetary and political union—Germany has been eager to let the French, Italians, and British make the running, and exert its influence gently.

Most expensive of all, the federal government will have to cover the deficit of the Treuhandanstalt (Trustee Institute), the institution set up to privatize the East German economy. The Treuhand is projected to lose about $14 billion this year and $22 billion next year. By the year 2000 it may be as much as $240 billion total in the red. The result should be familiar to most Americans: big budget deficits. Germany’s federal deficit this year will be around $80 billion, rising to around $90 billion by 1994. The national debt will soon break $900 billion. To pay for this, Kohl set a record for breaking campaign promises by imposing a slew of “reunification taxes” shortly after his sweeping victory in last December’s all-German elections. The income tax went up by 7.5 percent, the gas tax by fifteen cents a liter, and telephone tariffs also shot up.

The result has been a slump in the economy and inflation higher than France’s. Unemployment stands at 6.2 percent nationally. Everything is ten times worse in the East. More than a million East Germans—12.1 percent of the work force—are out of work now, and worse is to come. Culturally, too, the strains of uniting a religious South with an atheist East are beginning to be felt. The former Easterners are atheists (only 34 percent believe in God) and the Westerners are believers (70 percent believe). The East, where religious at all, is predominantly Protestant; the West is evenly split between Catholics and Lutherans. The East believes in authority (57 percent found the concept sympathetic) and the West distrusts it (only 31 percent). There are eight times as many foreigners living in the West, yet it is mostly young, male, unemployed East Germans who have taken to beating up Vietnamese guest workers, throwing Namibians out of windows, and pushing Mozambicans from streetcars. As many as 50,000 East Germans may belong to one neofascist group or another. One sign of the strength of this pressure is that the government has been forced to capitulate to declare that it would house foreigners seeking asylum in camps.

We have no doubt that in the long term, the German economy will prosper and that the social and cultural stresses of the new Germany will play themselves out. But the short term looks grim. The IMF predicts growth in Germany will slow from 1991 to 1992, and the pressures of immigration are likely to grow. This is no scenario for brave new initiatives, either diplomatic or military. NATO is not likely to be replaced by the WEU anytime soon. Neither is American leadership and involvement on a still fragile and unstable continent.

This article appeared in the November 11, 1991, issue of the magazine.