You are using an outdated browser.
Please upgrade your browser
and improve your visit to our site.
Skip Navigation
Gingrich's fatal misreading of the past. 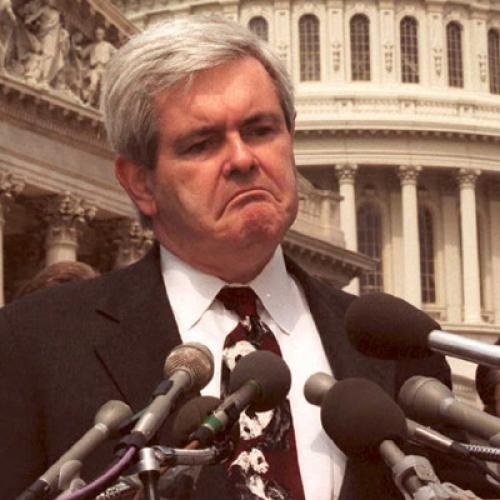 Throughout his career in the House of Representatives, Newt Gingrich reminded Americans that he was aware not only of American history—but of his own place in it. And, although many politicians have claimed the same thing, Gingrich ostensibly knew whereof he spoke: he actually has a Ph.D. in history. Alas, for Gingrich, this credential didn’t bring with it a true understanding of how the past relates to today. Indeed, Gingrich’s misreading of U.S. political history contributed to his ultimate downfall.

Gingrich spelled out his theory of history in a series of books (beginning with the most candid, Window of Opportunity, published in 1984) and through interviews. One of the clearest summaries is in E.J. Dionne’s They Only Look Dead, a 1996 book predicting that the Democrats would rise again. Gingrich combined the futurism of Alvin Toffler with the theory of political realignment championed by V.O. Key and Walter Dean Burnham. From Toffler, Gingrich adopted a theory of the stages of history, according to which the United States had passed during the early twentieth century from an agrarian "first wave" to an industrial "second wave" and was now moving toward a post-industrial "third wave," precipitated by an "information revolution." Each wave had its characteristic form of governance. Just as the second was shaped by the welfare and state capitalism of the Progressive and New Deal eras, the third would be shaped by new political ideologies and structures.

From Key and Burnham, Gingrich borrowed the idea that the election of 1896 had been a turning point in American politics—and applied it to the present. In 1896, Republican presidential candidate William McKinley, guided by his campaign manager, Mark Hanna, had represented the "rise of modern America." He defeated Democrat William Jennings Bryan, who represented the agrarian revolt against industrial capitalism, in an election that ushered in the second wave. Gingrich saw himself as Hanna (and later as McKinley); he saw the election of 1994 as a replay of 1896. It would, Gingrich argued, usher in the third wave by banishing the political forces and structures, including the welfare state itself, that were associated with the second. Naturally, Gingrich saw Clinton as Bryan, whom he described to journalist Fred Barnes as a "remarkably shallow but emotionally effective demagogue, maximizing class warfare and a sense of fear in order to avoid modernization."

There was also, however, an unconscious element in Gingrich’s theory of history that was a product of his having come of age politically in the late ‘60s. He envisioned the future apocalyptically—as a choice between heaven and hell. If America failed to adjust to the third wave, he warned Republican candidates in September 1994, "our children will live on a dark and bloody planet." If America adjusted, Gingrich wrote in To Renew America, "there is every reason to believe that this new era will see a revolution in goods and services that will empower and enhance most people." He saw the process of change itself as a stark contest between stagnation and revolution. He identified incremental reform with decay. He wanted to "accelerate the transition from a second-wave mechanical, bureaucratic society to a third-wave information society" (my italics). He envisioned the election of 1994 not as an ordinary political realignment but as a "revolution."

Alvin Toffler, wiser than his disciple, advised Gingrich after the 1994 election to follow the example of the British conservative Disraeli and co-opt rather than repudiate what was positive in the Democratic opposition. But Gingrich, his mind fixed on an image of revolution and sudden transformation, followed the example of Robespierre and H. Rap Brown. He called for "replacing the welfare state with the opportunity society." He bragged about letting Medicare "wither on the vine." He signed off on legislative proposals intended to cripple the regulatory reforms first adopted under a Republican administration, Richard Nixon’s. And, when the administration balked at his plans, he shut down the government itself. By January 1996, Gingrich’s program was in ruins. And he was never able to construct a new one in its place, partly because other conservatives wouldn’t let him. House Majority Leader Dick Armey and the Young Turks of the Conservative Action Team believed in a similar theory of right-wing revolution and wouldn’t abandon it.

There were, of course, elements of truth to Gingrich’s worldview. We are indeed in a transition from an industrial to a post-industrial society, but we have been since the 1920s. The new economy—emphasizing consumption over savings, software over hardware, design over mass production, and the global integration of manufacturing—has already forced dramatic changes in the way Americans live, and in our politics. But these changes haven’t necessarily followed Gingrich’s model or that of other Republican conservatives. The new economy is hostile to religious conservatism; it requires revamping, not eliminating, environmental, consumer, and labor regulation; it puts a premium on public education and vocational training and on new kinds of unemployment insurance to mitigate the insecurity brought about by accelerated change. It’s a political economy much more suited to the views of Robert Reich and Bill Clinton than to those of Gingrich or Armey.

And, as the current election demonstrated, it has not yet produced a political realignment like the one that occurred in 1896. American politics today much more closely resembles the 1880s—a time of equilibrium between the parties and programmatic stagnation in Congress—than the economic depression and populist insurgency of the 1890s. During the 1880s, the differences between candidates seemed stark, but the historian, comparing the Arthur, Harrison, and Cleveland administrations, finds far more continuity than change. The current decade is very similar. While it has seen dramatic election battles in 1992 and 1994, and the advancement in 1993 and 1995 of very ambitious, and utterly incompatible, programs by a Democratic president and a Republican Congress, it has also seen remarkable sameness in the actual policies enacted. There is no difference in thrust and intent, for instance, between the Bush administration’s 1990 budget deal and the Clinton budget of 1993. There is little difference from 1988 to 1998 in the pattern of public spending or in the kind of domestic policy legislation that Congress adopted.

Clinton, also a child of the ‘60s and a student of political realignment, believed in November 1992 that he, too, had created a "new era." He didn’t compare himself to Hanna and McKinley but to Franklin Roosevelt, whose "hundred days" he promised to emulate. Clinton survived because he accepted the verdict of November 1994 and lowered his sights accordingly. He was able to reconfigure his vision to the more modest political circumstances of the 1990s. Gingrich was forced to resign because—caught between the ardor of his followers and his own grandiose view of history—he was not able to adjust.

John B. Judis is a senior editor at The New Republic. This article appeared in the November 30, 1998, issue of the magazine.