You are using an outdated browser.
Please upgrade your browser
and improve your visit to our site.
Skip Navigation
Campaign Diarist 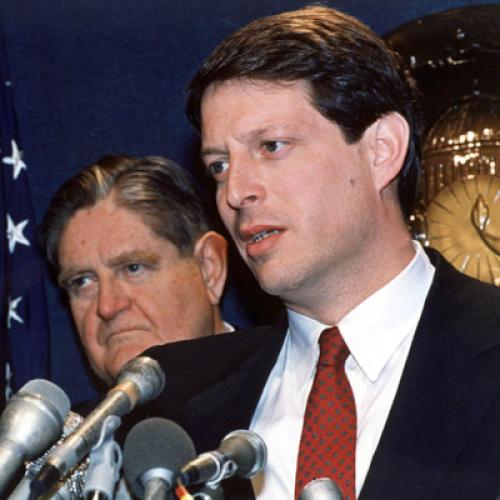 The 1988 campaign woke up with a start last Monday night. The sitzkrieg ended; the blitzkrieg began. The Iowa caucuses put a shocking stop to a long, dreamy year in which every event or pseudoevent that came drifting into view could be analyzed and reanalyzed, and then the analyses could be languorously analyzed in their turn. There was no hurry, even when, as happened from time to time, the events themselves lurched quickly. Whatever the distraction of the moment, it could be savored at leisure like a glass of port. The candidates and their staffs, of course, were all frenetic activity; but they were seen, if they were seen at all, as if through the wrong end of a telescope, tiny figures gesticulating in the distance, their voices faint and tinny, Inconclusiveness had become a settled way of life. It had begun to seem as if things might just go on that way forever, that we might all grow old together, lulled into somnolence by the gentle rhythms of endless poll results and murmured complaints about the length of the campaign, the absurdity of the process, and the inadequacies of the candidates. Then, blam! Iowa, Suddenly we're at Mach 2, and the landscape is a giddy blur below. To paraphrase Bette Davis, Fasten your seat belts. It's going to be a bumpy ride.

On the Democratic side, there were two unambiguous winners (Gephardt and Jackson), two ambiguous winners (Simon and Dukakis), one ambiguous loser (Gore), and two unambiguous losers (Hart and Babbitt), Among the losers, none showed his pain more chillingly than Gary Hart, From May to December, Hart was consumed by a single question, to run (again) or not to run. He never thought beyond that question. Eight weeks ago, when he made his existential leap into the void, he was beatific with relief. But in Iowa the pavement came up to meet him, and on caucus night his face was drawn into a mask of bitterness. In a tight, angry voice he told interviewers that his invisible showing didn't mean that much, that he'd do better in New Hampshire, that he'd only had a couple of weeks to campaign while everybody else had been at it for a year. The reality is that he has been campaigning for six years. New Hampshire will be the end for him. After that, for First Returns his sake, I hope he decides to forget about politics. He should move to L.A., where tolerance reigns and new beginnings are routine, there to become an entertainment lawyer or a movie producer.

Bruce Babbitt deserved better than the nine percent of the vote Iowa gave him. His calls for fiscal honesty had won him, briefly, the attention of the voters; but once they were listening he simply repeated himself, instead of telling them what (other than a tidy balance sheet) the taxes he advocated might buy them. He too will be out after New Hampshire, but if the next administration is a Democratic one there surely ought to be a place for him in it. As for Al Gore, his Southern strategy had looked for a clean Simon victory. Gore is ill served by Gephardt's emergence (and by Robertson's—more conservative Southern Democrats will now cross over on Super Tuesday), Gore survives, but his immediate future is as cloudy as his longterm prospects (he won't be Hart's age, for example, until the year 2000) are bright.

The Big Democratic winner, of course, was Richard Gephardt, a man who puts me in mind, unreasonably to be sure, of an earthling whose body has been taken over by space aliens, I keep expecting him to reach under his chin and peel back that immobile, monochromatic, oddly smooth face to reveal the lizard beneath. Perhaps the aliens are from the planet Bryan, How else to explain the fact that Gephardt, who until a few months ago was a sort of neoconservative neoliberal, has suddenly begun talking, in his slow, robotic voice, like a devotee of the cult of Populism? Whatever its provenance, though, Gephardt's message, as expressed in his extraordinarily skillful TV commercials and his own quick sound bites, is manifestly effective. The message is that our standard of living is going down, that foreigners and establishmentarians are to blame, and that we need new economic and trade policies to get better jobs at better wages. Not very uplifting, not very noble, but very, very clear.

The clarity of Gephardt's message, not the margin of his victory, is what makes him so formidable coming out of Iowa, Paul Simon's second-place finish was good but not quite good enough, and his backward-looking, Humphreyite campaign has stasis written all over it, Michael Dukakis acted triumphant on caucus night. His showing so far from home was strong, but not so strong as to tempt New Hampshire voters to take him down a peg. His record over the years is far more consistent than Gephardt's, but his campaign is intellectually and "thematically" adrift, wandering aimlessly from the Massachusetts Miracle to the Nicaraguan Nightmare by way of the New American Frontier, The danger, for Dukakis, is that he will imagine he can get by with more of the same. And Jackson? Well, he got five times as many white votes as black ones. He has made no blunders of the "Hymietown" variety, or any other variety. He will do better, maybe much better, than he did four years ago.

Among the Republicans, meanwhile, George Bush was giving new meaning to the term Skull & Bones, That's why Al Haig, who amassed a vote total that would embarrass Lyndon LaRouche, looked so happy. Maybe Bush will recover, but, as he showed in 1984, he does not find adversity invigorating. He has become a voodoo doll for everything Republican voters dislike about Reagan and almost nothing that they admire. Like Mondale in '84, he has a safety net of money and organization, but unlike Mondale he commands little loyalty among his party's constituencies. New Hampshire suddenly yawns before Bush like a great black pit, Pat Robertson was a surprise, but he has peaked. Fortunately he comes with a built-in ceiling. On caucus night he accused Tom Brokaw of religious bigotry for referring to him as a television evangelist, a charge that is sure to baffle the infidel majority. His function in Iowa was to humiliate Bush. His function now will be to destroy the chances of his fellow right-wingers, Jack Kemp and Pete du Pont. Right now it looks a lot like Bob Dole.