The majority party cracks up. 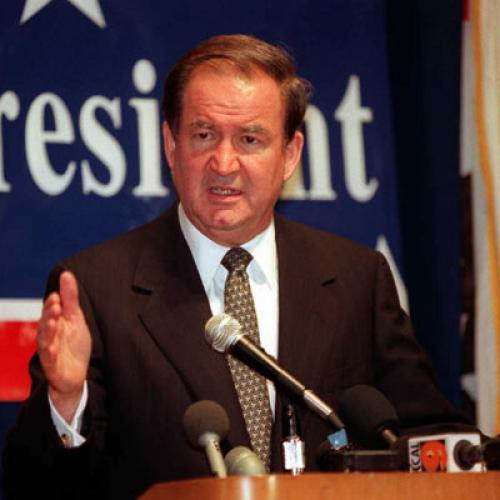 As the campaign for the New Hampshire primary drew to a close, Pat Buchanan began aiming his barbs at the Republicans in Washington who were denouncing his candidacy. "Let me tell my friends down in Washington, you know, all the nonsense you're talking about me," Buchanan told a packed, noisy rally in Portsmouth on February 17. "You all represent corporate America, and you represent these companies that make billions of dollars by shutting down their American factories. Start thinking about the American working men and women for a change, like I do, because I'm coming down there--I'm coming down there.... And we're going to have a Republican Party that looks out for working men and women and middle-class families who have seen their standard of living fall."

Buchanan's success in New Hampshire calls into question the two-decade-old Republican strategy of uniting economic and social conservatives. This strategy was first spelled out in National Review Publisher William Rusher's 1975 book, The Making of the New Majority Party, and it guided New Right efforts in the 1978 election and Ronald Reagan's landslide victories in 1980 and 1984. Phil Gramm invoked it in endorsing Bob Dole. "I am back today to endorse Bob Dole," Gramm told a Manchester press conference February 18, "because I believe Bob Dole is the one Republican candidate in this race today who can bring together economic conservatives and who can bring together social conservatives...."

The strategy worked not by creating a new political synthesis but by grafting a new group of voters onto an old one. Since the Civil War, Republicans have been the principal party of American business--attracting everyone from small-town Midwestern bankers to New York CEOs and financiers. But, in the Great Depression, the Democrats, enjoying the support of the working and middle classes, became the majority party. Beginning in the 1960s, Republicans sought to create a new majority by attracting white Southern and Northern ethnic Democrats dissatisfied with the counterculture and the anti-war and civil rights movements. Richard Nixon's landslide victory in 1972 and Ronald Reagan's in 1980 and 1984 were based on uniting the Republican business elite with disenchanted white Democrats.

During the Reagan era, the different groups within the party maintained a marriage of convenience. Suburban middle managers and their wives were willing to ignore the party's anti-abortion plank as long as Republican nominees remained firmly committed to cutting business taxes and regulation. Catholic Democrats in Dubuque or evangelicals in North Carolina acquiesced to capital gains tax cuts because of their opposition to abortion, affirmative action and the Soviet Union. New Right strategists compared this alliance to that between Northern machine Democrats and white Southerners. By drawing these working-class and middle-class Democrats into the Republican Party, however, Republican leaders of the '80s created a Trojan Horse within their own ranks.

The partners first began to quarrel during George Bush's administration. The cold war's end removed one important source of unity. And, as the threat of inflation was replaced by that of wage stagnation and job displacement or loss, many of the Reagan Democrats looked toward populist and economic nationalist (but not liberal) solutions. They blamed rootless multinational corporations, unscrupulous Washington lobbyists and unfair competition from Japan and China for their plight. They came to favor restrictions on immigration and tariffs on foreign goods but not labor law reform or national health insurance. In 1992, these voters were drawn to Buchanan in the Republican primary and to Ross Perot and Bill Clinton in the general election, but Clinton's social agenda and the continued erosion of their standard of living threw many of these voters back into the Republican Party in 1994.

Many of the economic nationalists within the Republican Party do not belong to the religious right. But the corollary isn't true: most of the religious right's rank-and-file are solidly with Buchanan on economic issues. In 1993, Buchanan sparked a revolt inside the Christian Coalition over nafta, forcing executive director Ralph Reed to withdraw the organization's endorsement of the pact. In New Hampshire this February, I stood next to pro-life activists who cheered as lustily when Buchanan attacked nafta and the new World Trade Organization as when he promised to appoint a pro-life vice president. It's one constituency, united by a fear of economic and moral decline and by a nostalgia for an older America.

Many of the Republican economic nationalists are concentrated among voters who make less than $40,000 and who have personally experienced a decline in their standard of living. In Louisiana, Iowa and New Hampshire, Buchanan gained his highest pluralities among these voters. But the appeal of economic nationalism is not strictly limited to working-class and downwardly mobile Republicans. Just as suburban voters worry about ghetto illegitimacy and urban crime, many upscale voters have begun to worry that either they or their children will suffer a decline in their standard of living. That was clearly what happened in New Hampshire--to Buchanan's own surprise.

Last summer, I traveled with Buchanan in the Midwest and New England. In Ohio, where his audience was blue-collar workers, he emphasized his opposition to nafta and to multinational corporations. When he spoke, his campaign workers unfurled behind him a banner reading "free trade no, fair trade yes." In New Hampshire, speaking at well-to-do suburban developments, he emphasized his opposition to abortion, gun control and higher taxes rather than to free trade. His banner read simply "buchanan for president." Buchanan told me at the time that he didn't believe that most New Hampshire voters were interested in his "core issues" of trade and jobs.

That seemed a fair supposition. New Hampshire has the lowest unemployment rate in the country, and Money magazine has ranked three of its communities in its list of the twenty best places to live in America. Yet during the final weeks before the New Hampshire primary, Buchanan discovered growing enthusiasm for his economic views, even in the state's prosperous southern tier. At the rally in Portsmouth, which is about 3,000 miles from the Rio Grande, he got applause and shouts of approbation when he declared his intention to block illegal immigration. At a boisterous February 18 rally in Nashua, one of Money's favorite communities, his attacks on nafta and gatt and his promise to represent the "working men and women of America" were repeatedly interrupted by shouts of "Go, Pat, go." In the primary, he won a plurality in the Manchester/Nashua corridor.

When I asked several people at the Nashua rally why Buchanan's message was so warmly received in a town that showed little sign of economic distress, I was told the same thing: even though there were now jobs, the new jobs paid less than the old. One aerospace engineer told me, "A lot of people who worked with me are now bagging groceries or driving taxis." That may be an exaggeration, but a computer consultant more convincingly described people he knew who had been laid off by DEC, Lockheed-Sanders and Raytheon during the last recession and who had not been able to find equivalent jobs afterwards. These anecdotes are borne out by statewide statistics. Median wages have declined statewide since 1989. While New Hampshire has added about 75,000 new retail and service jobs since the recession, it has lost thousands of better-paying construction and manufacturing jobs.

IN ADDITION, many New Hampshire residents believe that even if they are doing well their children may not. Last year, the University of New Hampshire Survey Research Center found a sharp increase in consumer confidence, but it also found growing pessimism about the future. Asked whether they thought their children "will have a harder or easier time achieving the American dream" than they did, 77 percent of those polled thought their kids would have a harder time.

As Buchanan surged during the last week before the primary, some Republican operatives simply refused to believe how profoundly their own party has changed. As I was leaving the rally in Nashua, a Dole official from Washington assured me that half of the Buchanan supporters in the room were Democrats who would be ineligible to vote in the primary. I knew that wasn't true of the people around me, but I performed my own informal poll as people were leaving. Everyone I asked said they were voting for Buchanan.

Other Republicans have insisted that Buchanan is an aberration in the Republican Party. David Brooks of The Weekly Standard compared him to the Italian Silvio Berlusconi, the former far-right prime minister of Italy. Former Bush aide Jim Pinkerton described Buchanan as an "isolationist Gephardtian liberal," and George Will, whose wife works for Dole, described Buchanan's conservatism as "bogus." But Buchanan's economics are squarely in the tradition of pre-World War II American conservatism, which favored tariffs but opposed the New Deal and the welfare state. He is responding to a problem--the decline in America's living standards--and to a constituency that other conservatives will eventually have to address.

It is important to distinguish between Buchanan's recognition of this problem and the quality of the solutions that he proposes. What resonates among voters is a simple and irrefutable point that Buchanan makes in every speech: in the new global economy, American workers who make $10 to $20 an hour are being forced to compete with foreign workers who are often equally productive but willing to work for as little as $2 an hour. That is driving down wages and is also prompting firms to move either to lower-wage areas in the U.S. or overseas. Buchanan's assertions about immigration and trade deficits are equally difficult to dismiss. Immigration from Mexico is putting some downward pressure on wages, and the trade deficit with Japan, concentrated in high-wage manufacturing, has also threatened valuable jobs.

BUCHANAN IS NO economist. In a radio interview he explained that immigration depresses wages by increasing the supply of labor and reducing the demand. His solutions are often simplistic. Across-the-board tariffs, for example, could jeopardize American firms that are dependent on imported components. As an Old Right conservative, Buchanan also ignores other equally important causes of wage decline, such as the disappearance of unions and the failure of the U.S. government to raise the minimum wage. Indeed, trade restrictions alone would not necessarily lead to an increase in Americans' standard of living. But outside of Morry Taylor, Buchanan was the only candidate in New Hampshire to pose the basic problem of how, within the new global economy, American workers can maintain or increase their standard of living. Bob Dole promised leadership; Lamar Alexander the replacement of welfare by private charity; and Steve Forbes a tax program that would precipitate a new fiscal crisis of the state.

Buchanan's trade stance could eventually cost him the Republican nomination--not directly through the loss of votes but by depriving him of funds from the party's business interests, funds he needs in order to compete in big states like California. What is more likely to cost Buchanan votes directly is his social agenda, which combines Catholic fundamentalism and Old Right bigotry. In New Hampshire, Buchanan's commitments to the Christian Coalition would have prevented him from defeating either Dole or Alexander in a one-on-one contest. Buchanan's association with Larry Pratt and his own views on the Voting Rights Act and the Confederacy may help him in the South, and probably did help in Louisiana, but will also limit his appeal in the North. Buchanan's victory in New Hampshire could be the high-water mark of his presidential surge.

But the most interesting questions posed by Buchanan's success in New Hampshire are not about whether he will win the presidency but about how other Republicans will come to terms with the issues he addressed and the constituency that he has championed within the party and among independents. Republicans ignore at their peril American workers' unease with global capitalism. That's the real lesson of this year's New Hampshire primary.