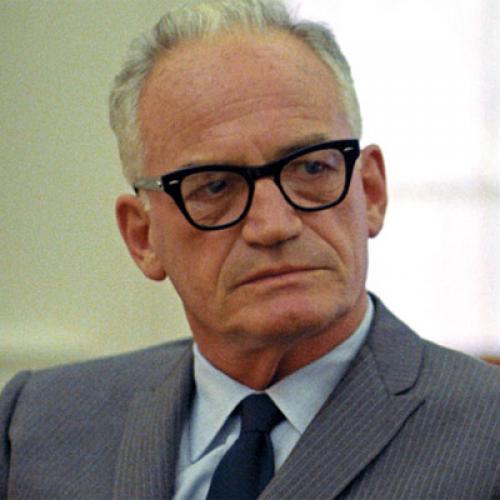 WASHINGTON, D. C.—The congregation never came. The television men were at their stations; the professionals on Goldwater’s staff had no duties of hospitality except to explain to the visiting journalists how inconsequential New Hampshire is, the way Eddie Fisher explains how inconsequential Elizabeth Taylor is. There were the girls in their Western hats and their Goldwater sashes, dressed for photographers who would not need their pictures. We think of the Goldwater people as the most radically innocent in all our politics. But the computer has destroyed the innocence of us all. The illusion of Barry Goldwater’s special destiny had survived in these people against any interior doubts of reason and all the exterior preachments of established common sense, to be blown away in 15 minutes by a magical, mechanical instrument.

The ordinary believers may in fact have commenced to give up before the polls opened. One of those journalists who has the good sense to know that if you are reduced to canvassing the mind of a voter you might at least pick the most appetizing one possible, asked one of the girls in the Goldwater sashes how she felt knowing that all her hopes for a better America were being rendered into ashes this night. He reported that she replied, untroubled, that her involvement with the remains was minimal. She had been sent there by the Young Republicans of Washington because the Goldwater headquarters had called the day before to say that the committed were so laggard in indicating their intention to show up that it would be a fraternal act if a few of the neutral girls would come around just to provide a backdrop. She supposed she was for Nelson Rockefeller.

There was a telephone labeled “Direct Wire to Concord, N.H.” and a great blackboard with the names of the state’s townships running down its side and the names of the various candidates across its top and blank spaces for the returns. At 8:00 pm those blank spaces were still virginal; 20 minutes later, a young man solemnly advanced to the board with his chalk; there was a rustle, more of resignation than of anticipation, and the young man carefully chalked the number of voting precincts beside each township.

No votes had yet been posted. Senator Goldwater has been accused of protecting his followers from the real world. Now his committee had constructed the ultimately-merciful isolation chamber; we were in the one place in Washington where he who truly believed could come and be assured of freedom from the peril of hearing a single early election return.

Around 8:45, Clifford White, the Goldwater campaign’s operational director, was telling NBC about the power of family sentiment in the Lodge vote. We must understand, he said, that this was a regional phenomenon. New Hampshire had looked at Henry Cabot Lodge and seen a native son. I cherish Henry Cabot Lodge because he is the only politician I ever again expect to see run for office who, when he is asked a question at a press conference, begins his answer, “Well, my good man. . . .” Of all the spectacles an inflamed mind can conceive, the only one I would reject out of hand would be the image of Henry Cabot Lodge looking upon the assembled voters of New Hampshire and holding out his arms and crying, “Mummy . . . Daddy.”

There cannot ever have been a night quite like this in our political history. We had watched two powerful American politicians, limitless in resources, expose themselves wherever two or three were gathered together in the sight of God and the boundaries of the state. And when they had finished, 55 percent of the voters had found against both of them.

The week before, Goldwater had made the point that the Lodge movement was a threat not to him but to Rockefeller. The impulse to write in the name of our former Ambassador to the United Nations was, he argued, far more apt to overcome a voter who was leaning to the Rockefeller rather than to the Goldwater position, That is sound reasoning and it impels the thought that, if New Hampshire had been offered no other choice. Rockefeller would have clobbered Goldwater and, at this moment, we would all be entertaining illusions of Rockefeller’s majestic recovery.

His television duties completed, Clifford White addressed what few ordinary worshipers might be scattered around church among the priests, the acolytes and the sextons. “We’re going to have a long evening,” he told them. “In 10 or 15 minutes we’re going to give some of the returns.” There remained among the professionals the faint hope of an upturn; the direct wire from Concord had not sounded all night. The girl who had been stationed for its first clang had long ago been induced to go to the bar for a drink and an interview: “Pepsi-Cola,” she said as she rose, “I’ve given up everything for Lent.” She had deserted a useless post; the phone sat silent. At 9:30 the attendant went to the board and began ravishing it with the figures.

Precisely at 10, Barry Goldwater was on the stage. There were shouts that “We want Barry” and he answered, cheerful as always in trouble, that they were going to get him. He wanted, he said, to thank them all and to say that Cabot Lodge had an excellent organization, “although ours was as good or better.” His is too handsome a nature for his business; he could offer the conventional excuse that he had been beaten by a better organization and then at once withdraw it, rather than hurt the feelings of a friend. He talked about native sons and how, as a Westerner, he would do better in California. And then, as is his nature, he said the sort of thing that rebutted his own case. The “beauty contest,” he pointed out, was less important than who got the New Hampshire convention delegates. He was sure he would get some of them; New Hampshire voters could hardly turn down their senior US Senator, “the Speaker of their House, the President of their Senate” as delegates to the Republican convention. And these were all Goldwater candidates. But all these Goldwater delegates, just at that moment, were trailing Lodge’s slate of unknowns.

Barry Goldwater had managed to remind anyone present who might otherwise have overlooked it of the entire enormity of his disaster. His delegate list had included every Republican state officeholder of substance, and, by mere temporary association with Barry Goldwater, every one of these poor fellows seemed to have gone down.

Goldwater ended accepting all the blame as his own; he had goofed, he said, and made mistakes he would not make again. They still had a whale of a chance, he told them; and then he cheerfully departed. A reporter asked him to detail his mistakes and he answered: “None of your business.” So he doesn’t use “damn” any more; it would be sad if he thought that this engaging practice had been his only mistake.

While the Senator waited upstairs, everyone else began to leave and met upon the stairs new figures arriving late. One was Arthur Summerfield, former postmaster-general of the United States and former national chairman of the Republican Party, who had bet on Goldwater last summer; another was Dan Gainey of Minnesota, an authoritative disposer of campaign funds. They are large men, with faces unchanged by a bet won or a bet lost; they paused just long enough to say good evening as though we had all happened to meet on a street comer and then their broad, flanneled-backs went through the door to the hall to Goldwater’s suite. It was hard not to believe that Barry Goldwater’s late vigil with the returns was about to end with the visit from his banker to say that there could be no further credit.