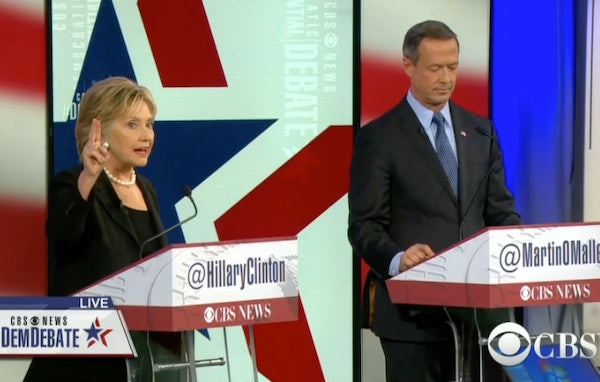 Hillary Clinton is a master of the cheap pop.

In professional wrestling, a cheap pop is a way for a wrestler to get an easy cheer from the crowd, often by dropping the name of the city or a local sports team. At the CBS debate, Clinton mentioned Iowa or Des Moines at least three times while talking about three different issues (none of which were corn).

On gun control: “But just think about this—since we last debated in Las Vegas, nearly 3,000 people have been killed by guns. Twenty-one mass shootings, including one last weekend in Des Moines where three were murdered.”

On why she’s not beholden to big donors: “I think it’s pretty clear that they know that I will [’level the playing field,’ as Bernie Sanders put it]. You have two billionaire hedge fund managers who started a super PAC and they’re advertising against me in Iowa as we speak.”

On why health care shouldn’t be administered by states: “I would not want, if I lived in Iowa, Terry Branstad administering health care.”