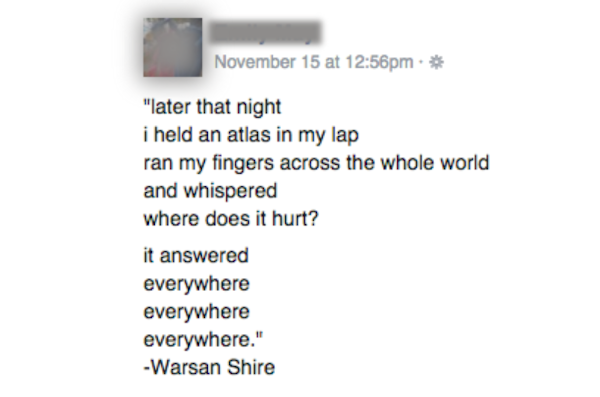 Poet Warsan Shire is the new voice of the refugee crisis.

Like Jean Jullien’s Paris peace sign, screengrabs of Shire’s poems are exploding across the social mediaverse, as users look for ways to express grief over the Syrian refugee crisis and, more recently, the Paris attacks.

Born in Kenya in 1988 to Somali parents, Shire moved to London when she was one. She writes about the immigrant experience in a spare, accessible style reminiscent of Martin Niemoller’s “First They Came For...”, which became popular in the decade after World War II.

While Shire has received major awards and accolades, including the Young Poet Laureate of London in 2014, she is very much a poet of the digital age. She has popular Twitter and Tumblr profiles where she posts her work. In the New Yorker, Alexis Okeowo said her poetry “will surface in one of your social media feeds and often be exactly what you needed to read, or what you didn’t know that you needed to read, at that moment.”

Curiously, the full version of her viral poem “What They Did Yesterday Afternoon,” (quoted above) has disappeared from her Tumblr.