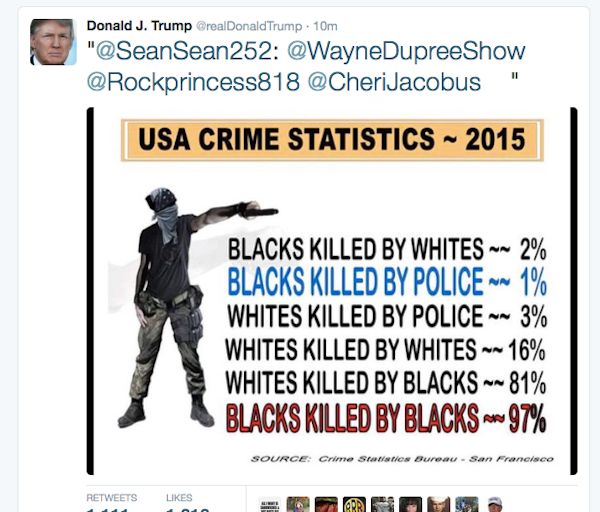 Going back to at least Barry Goldwater’s “constitutional” opposition to civil rights and the strident “law and order rhetoric” of the early 1960s, the Republican Party has specialized in racist dog whistles. But Republican front-runner Donald Trump doesn’t do dog whistles. He specializes in train whistles. Consider the tweet he just sent out with bogus statistics on crime. According to the tweet, 81 percent of murdered whites are killed by blacks. In fact, that’s the reverse of the truth. Most people are killed by members of their own race because crime is motivated by proximity and opportunity. As the Huffington Post notes, “According to the U.S. Department of Justice statistics, 84 percent of white people killed every year are killed by other whites.”

By wildly inflating the likelihood of a murderer of a white person to be black (an exaggeration of nearly sixfold), Trump is catering to the worst sort of racism. Perhaps the icing on the cake of this anti-black outburst is that the source of information cited in the tweet—the “Crime Statistics Bureau” of San Francisco—doesn’t seem to exist. What remains to be seen is if the Republican Party and the other candidates will repudiate this crude and dangerous race-baiting.