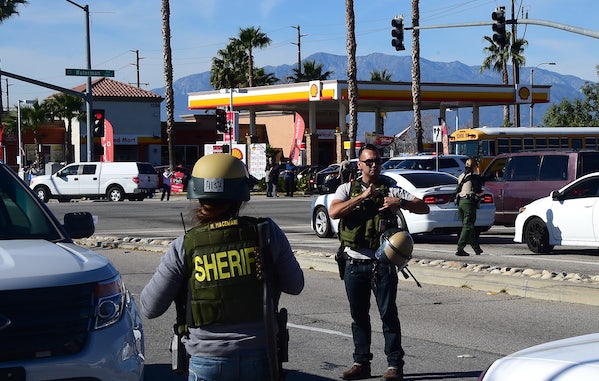 At least 14 are dead in a shooting in San Bernardino, California. The shooter or shooters are believed to be at large.

Fourteen others who were wounded are at hospitals around the area. In a press conference, San Bernardino Police Chief Jarrod Burguan indicated that both the casualty numbers and the information about the shooter or shooters was subject to change. Burguan indicated that police are still clearing the Inland Regional Center where the shooting is believed to have taken place. When police arrived on the scene they were under the impression that the shooters were still inside, but are now working under the impression that “the suspects have fled, potentially in a dark-colored SUV.” Burguan indicated that he did not have any information on the suspects or their motive, though he did say that they used “long guns,” were “dressed and equipped to suggest that they were prepared,” and came “as if on a mission.” CNN is reporting that numerous law enforcement sources have suggested that this looks like a “planned shooting.”

“At minimum,” Burguan said, “we have a domestic terrorism incident that occurred here.”